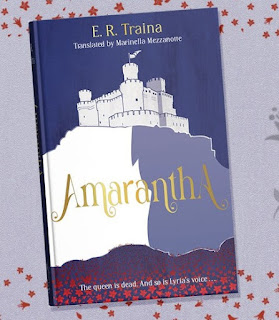 I am very lucky to have a lot of talented friends who write (or translate) books and while each time I start one of their books there is some trepidation - what if I don't like the book? - I am always excited to read their creations.

I've been a fan of a particular genre of YA fantasy since I was a teenager. I don't quite know how to best describe the genre but authors who I really enjoy are Tamora Pierce and Trudi Canavan - they have strong female leads in worlds that are recognisable as being earth like, often have a strand of magic running through them, and are set in a pre industrial revolution age.

Amarantha by E. R. Traina instantly joins my list of favourites in the genre. The world is well built, believable and incredibly visual. The main characters are well drawn and credible, they never feel like cardboard cut outs. Throughout  the story the book kept me guessing but never confused.

I was a little worried towards the end that the book was going to only be half a story and that I'd be left hanging waiting for a sequel, but without being rushed or sketchy in any way the ending was complete and made total sense within the context of the plot. There are enough 'what ifs' that I'd pounce on a sequel like a shot but if Traina moves on to something new for her next book I'll be just as keen to read it.

As a nice touch the book also has a soundtrack, composed and played by the author, and these tracks definitely add to the reading experience rather than feeling like a gimmick.

The notes at the end explaining the translation process for the book were also fascinating and I am so pleased that I can wholeheartedly champion a book that ticks so many of my personal reading boxes.

I was sent an early copy of this book by Kurumuru but there was no obligation for me to review the book.