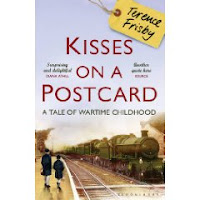 Kisses on a Postcard - Terence Frisby

I've read a lot about this book in various places and I've been waiting for my library reservation to arrive for a couple of weeks. What better way to spend the weekend - curled up savouring a long awaited book.

It didn't quite work out like that. This book was so good I tore through it, there was no savouring to be had!

What drew me to this one was that Terence Frisby acknowledges that nearly 70 years on there is no way that he can remember everything accurately but that this is the memoir as he remembers it.

Terence and his brother were very lucky in that they struck gold with their foster parents, many didn't. This is a happy memoir and even the sad occurrences are threaded with humour.

I think that what I liked most was how the narrative is all linked together with train and railway anecdotes. Not only did it help the reader travel through the book it was a nice way for Terence to remain in touch with his parents back in Kent, as Dad was an essential railway worker.

I did want to savour this book but I couldn't. I do now want my own copy to add to an already large collection of books about the Second World War.
Posted by Sarah at 10:07 am No comments:

Of Sequels and Prequels

I think that gods of reading are conspiring against me at the moment and it isn't a nice feeling.

I love the idea of sequels and prequels to my favourite books and series, they aren't always strictly in keeping with the originals but I still leap on them as soon as they are published. I am usually disappointed. Very rarely can a book be as good as the original.

When sequels to classic books are written then too much of the modern world creeps in and they books just don't have the right 'feel' to them. Often they descend into pastiche. Yet I still read them all.

I had high high hopes for Wishing for Tomorrow. Hilary McKay's previous books have all been wonderful. So good that I even buy them in hardback on publication because I know I will want to reread them many times. A Little Princess was also my favourite Frances Hodgson Burnett book as a child. What could be a better combination?

Well in all honesty pretty much anything.

Wishing for Tomorrow had none of the wit that McKay usually provides and none of the magic that Hodgson Burnett gives. It had no depth of style, content or character and didn't, for me, evoke any of the original at all. I know that as an adult you are never going to have the same experience reading a children's book as you have when you read it as a child but I recently reread A Little Princess and it still moved me. I fell headlong into the story and really felt I was living at Miss Minchin's Academy with Sarah and co. Wishing for Tomorrow didn't do this, I felt like a bystander watching a mediocre entertainer, I didn't want to keep reading but embarrassment kept me going.

I know that every time I read a prequel or sequel I am a little disappointed but this was in a different league. I think that perhaps the problem is that A Little Princess really didn't need a sequel. It was perfect as it stood.

I don't like being this negative but I was really underwhelmed with this one. I will continue to buy and read prequels and sequels as some of them are excellent, for example the Chalet School continuations published by Girls Gone By Publishing and the excellent Before Green Gables by Budge Wilson, but I don't think I will ever look forward to them with such enthusiasm again.
Posted by Sarah at 5:32 pm No comments: