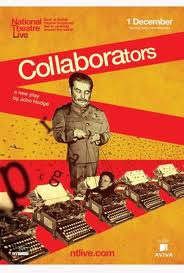 Tickets to see this in London appear to be like gold dust and to add insult to injury when I tried to book tickets to see this Live it had also sold out. Luckily my local Picture House cinema put on an 'encore' performance and so I did manage to get tickets.

It still feels quite odd to go to the cinema to see a play but once I managed to get my head around the concept I was sucked in.

This is a very odd play and not one I can sum up easily. Like many tales about Stalinist Russia it is not always a comfortable watch. Sticking to your principles and ideals under such circumstances must have been very hard and seeing how a passionate man became corrupted was shown very convincingly.

The actors were very good, although at the very start Simon Russell Beale did seem to be playing Ricky Gervais rather than Josef Stalin. Alex Jennings was very good as Bulgakov and the rest of the cast supported brilliantly.

Collaborators is currently being performed in the Cottesloe Theatre at the National, and this small, versatile space worked well for the staging. This was very much theatre in the round and a limited space for the stage really did mean the set was used in a truly innovative way - I do wonder how the transfer to the Olivier Theatre will work.

I think that at times the metaphors were over egged a little, and I felt very uncomfortable during much of the play as I was feeling sympathy for Stalin - happily the end did manage to recreate the more traditional view of the dictator.

On the whole this was a really enjoyable play, one that I am very glad that I have seen but not one that I will be sad that I only saw at the cinema and not actually at the theatre live. 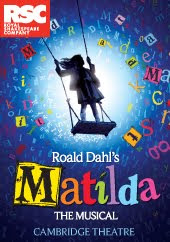 This is another performance that I'd been looking forward to for a while, and indeed I'd booked tickets shortly after the box office opened way back in the summer.

Now nearly a week after seeing Matilda I am still not entirely sure what I thought of it. There was lots to enjoy.

The acting was amazing, the child actors were very good especially the girl playing Matilda. Miss Trunchbull (played by Bertie Carvel) was outstanding and it was very hard to believe that it was a man playing the role.

I quite liked the set, it was clever and eye catching but at times it was distracting, all too often I found myself trying to spot words formed by the letters. The way the props appeared from being set into the stage was very clever and I did like the way that you saw how the staging was working.

However, for me, there was lots that made this an outing that was merely 'meh' rather than 'wow':
Oh dear, this is becoming a totally damning write up and I don't think that it was truly that bad there were just so many niggles (and that is before I even think about the behaviour of the audience).

I suppose that in a way it is my own fault, this was after all an adaptation of a favourite book and we all know how much I squirm through films made from favourite books!

On the whole I had a good time, just from the reviews I expected to be blown away and I wasn't. For me I felt that Matilda didn't know if it was a play, a musical or a pantomime, if it had only been just one of these things it would have been so much better. 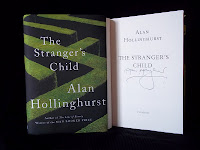 In my current job at the library (and when I worked for Waterstone's) planning events with authors is a routine part of my job and over the past 10+ years I've been lucky enough to meet many authors.

However as the person organising the events I haven't always been able to enjoy them thoroughly. I'm on edge during them, making sure that the building stays relatively quiet, that the author doesn't need anything etc etc.

This week I went to see Alan Hollinghurst at UEA where he was speaking as part of the Autumn Literary Festival and once I remembered that I could just sit back and relax I really enjoyed the talk.

I've admired Mr Hollinghurst for a few years now and while a lot of the talk was about the newest novel (The Stranger's Child) there was also a lot about the other novels and the influences on Hollinghurst's work. I didn't find the new book to be my favourite novel but hearing about it from the horse's mouth (so to speak) did make me look at it in a different way and I now understand a little more of why it is structured as it is.

Mr Hollinghurst had a fantastic voice, as well as being very interesting speaker, and it was a delight to be able to sit for the whole hour and just listen without having to be on duty.

I am pleased that I get the chance to meet so many fantastic authors, and I'm already well under way planing events for next spring, but I must try to go to more talks where I can concentrate on the speaker!
Posted by Sarah at 2:57 pm No comments: