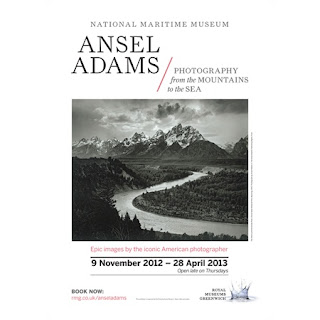 Ansel Adams from the Mountains to the Sea, National Maritime Museum, Greenwich. March 2013

When I'm not reading or at the theatre photography is another time consuming hobby that I pursue, one that I was introduced to by dad.

I think I had a camera from about the age of 5 - I remember a very early trip to London Zoo with my dad and a camera, one that had a screw on flashbulb. I know I also had at least one 110mm camera and that I wasn't a teenager by the time I had my first SLR - an Olympus OM10.

Since the advent on digital I've been through a few cameras but Canon DSLRs and their lenses really inspired me.  I'm not great at indoor photography or portraits but I love taking landscape and nature shots and for years Ansel Adams has been a great inspiration.

The exhibition at Greenwich was wonderful when dad and I visited in early March.
It was housed in a light and airy room (unlike the rest of the over heated museum) that has wonderful white walls making the images really stand out.
The exhibition was reasonable empty as we wandered round and so we could stop and really stare at images that caught our eye. We could also wander round in any order we wanted and backtrack at any point.

While a lot of my favourite images weren't included (they don't have any link to water) I discovered dozens of new images that I hadn't seen before and fell in love with dozens of them. We were surprised at how small the originals were and how ingenious his methods for making the huge images!

There was a film show in one corner of the exhibition with footage from interviews with Adams and a couple of things he said really resonated.

There is a lot of talk about how 'real' photos are today with all of the technology out there to alter them, yet Adams himself spent up to a day working on a negative to get just the print he wanted.  The dates of his pictures are just when the shutter was pressed - the prints can be from anytime as he manipulated them in the dark room.

He also talked about photography and editing as being like music. A composer writes the score but it is up to the conductor and musicians how it sounds. Thus a dozen people can stand in one spot and take the same view but each of us will produce something different.

I've always been a little unsure about editing my photos in programs such as photoshop because I thought it was cheating - now I can see it as creating art from a basic start.  I still won't be doing things like substituting one sky for another and changing the basic image that much, but I won't feel guilty about enhancing the colours, converting to black and white and cropping.

One day I dream of taking just one picture half as good as Adams but this exhibition has inspired me and has not depressed me.  I'm now looking forwards to a planned trip to California, Yosemite and the Sierra with my camera.  And hoping that the schedule will allow a long visit to the Ansel Adams Gallery. I'm already saving hard!

The one disappointing thing about the exhibition was the gift shop. Both dad and I had fallen in love with a couple of images, including one of the huge feature pictures, but they weren't available to buy.  I am still debating whether to buy the exhibition catalogue as this may be the only way to get a copy of these images. 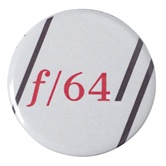 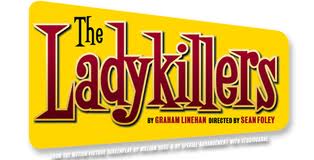 I was introduced to the Ealing Comedies by Mr Norfolkbookworm not long after we started going out together. There is something timeless about a lot of the films and they are real comfort films that stand rewatching.

The Ladykillers took London by storm when it opened in late 2011 and went on to be nominated for many awards in the 2012 season. It wasn't one that hugely appealed at the time - I'm always wary of adaptations of well loved films/books as I've written before.  A friend, whose opinions I trust, also wasn't blown away by it when she saw it and so it passed me by.

However curiosity (and priority booking/discounts) got the better of me, when it was announced that the touring version would come to Norwich I booked the hubby and I seats.

I'm glad we saw it, the acting was very good and I think that the set is the best I've ever seen in Norwich - it was so intricate and clever. It has been a while since I last saw the film but the story felt fresh and yet at the same time also managed to feel like a 1950s Ealing comedy - no mean feat.

Ultimately it was a nice evening. Mr Norfolkbookworm isn't a great theatre person or a fan of London  so seeing a play together is always a treat but (and didn't you just know this was coming!) for me the play just lacked a little something.
I laughed and I was amused but I wasn't swept away at any point.
I do wonder if the pacing had anything to do with it - perhaps making the play 10 minutes shorter and doing away with an interval would have made an entertaining play into a great one?

I'm glad we saw it but I'm glad we didn't pay top whack for the seats and travel to London for the experience. 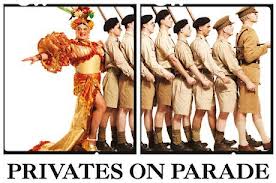 
Simon Russell Beale is one of my favourite actors and when the chance came up to see him in Privates on Parade before the limited season comes to an end I was a very happy Norfolkbookworm.

Rebecca and I knew very little about the story beforehand and once more this worked in our favour.

The play is set in Malaya at the end of the British Empire and follows an entertainment unit on tour.  Women are in short supply and so a lot of the 'acts' are done in drag and the humour and poignancy comes through as it becomes clear that most of the company are actually gay and those that aren't are accepting.

When not watching the company rehearse and perform we learn more about the behind the scenes actions of the unit commanders and it is here that the plot turns darker and more serious.

The play was wonderful from curtain up to curtain down the often hilarious first half was always balanced by the slight foreboding that things couldn't last and this balance of laughs and seriousness really worked for me.  I did go from crying with laughter to welling up in sadness at the sounding of the Last Post.

I can see why some people are a little uncomfortable about the casual racism of the play but when you realise that this is actually making a point as well as being typical for the time it becomes understandable and in a way a very clever plot device.

The audience in the theatre are addressed frequently from the stage by the cast and it took me a while to see that this wasn't a pretentious 'breaking the fourth wall' event but because we were part of the play. When the SADUSEA company were on stage we had become the Armed Forces audience they are performing to and not just the audience seeing Privates on Parade.

For a cast that were primarily not trained in musical theatre I take my hat off to them all as they sang and danced wonderfully throughout and stayed totally in character and accent as they performed. It was a real ensemble piece and while Simon Russell Beale was the draw for me the entire cast were fabulous and balanced the over the top aspects of Beale's persona wonderfully.

The language, topics discussed and full frontal nudity in this play mean it isn't for everyone (including the school party at the performance we attended!) but for me it was a great play and I am so glad that I found the time to see it - a real pick me up at the end of a drab, cold February. 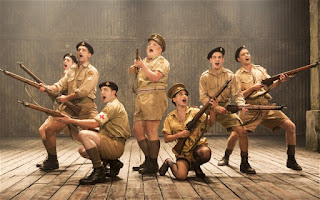 and for those wondering - yes there were plenty of 'privates' on parade!

More praise has to go to the cast as the play was struck by tragedy when the original actress playing Sylvia died during at the start of the run a few weeks after being diagnosed with cancer. The rest of the performances have been dedicated to her memory.