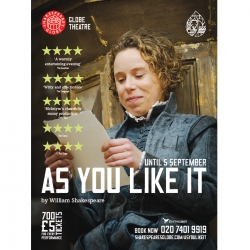 
Unusually for Mr Norfolkbookworm and I we were at an evening performance for this and the first thing we noticed was the huge queue of people waiting for returns.  We're used to seeing long lines for those wanting to be a Groundling but never for seats.  I wonder if this production is more popular than others we've seen or if this is normal for evening performances.

For a play that has no real plot, that is just a sequence of events loosely tied together, I enjoyed this a lot.  The characters that were written humorously in the original (Touchstone, Audrey and Jaques) were not overblown and the Rosalind/Ganymede and Celia/Aliena beefed up their roles to match the humour which I found balanced the play very well. The male love interests in contrast did seem a little insipid and interchangeable - this was certainly an adaptation played to a comic and feminist slant.
I wonder if the director of the play also realised just how slight it is plot wise as the deus ex machina towards the end was certainly played up to be utterly ridiculous, which worked with the other staging decisions of the play.

The more Shakespeare plays I see the more I realise that the 'comedies' are not my favourite. There was nothing wrong with this one in terms of acting etc. but the slight plot made me long for some intrigue and seriousness.

After studying Shakespeare in depth I was also more bothered by the staging and extensive use of the Groundling area.  This would just not have happened at the time of the original Globe - the costumes were just too expensive to risk off of the stage, and although giving great opportunities for entrances and exits too much of the action is invisible from the Upper Gallery. A minor criticism as all of the actors projected well and I didn't miss a line of dialogue. I remain unsure about the bicycle and  the shopping trolley however.

A big shout out has to go to the Steward who was working the Upper Gallery, Mr Norfolkbookworm asked him an idle question about an instrument being played on the stage in the interval and although he didn't know the answer the steward (no name badge so I can't be more specific) went and found out for us and slipped the name to us during the second act.
Posted by Sarah at 10:42 am No comments:


Oh What a Night!

I've wanted to see this musical for a long time as I love the music and often have the soundtrack playing as I am walking/studying/avoiding the house work and it seemed as if the whole of Norfolk had the same idea - this booked out ages ago and the group of 5 of us were dotted around the circle rather than next to each other.  This doesn't really matter however as you shouldn't talk to the person next to you during the show anyhow!

Apart from the music I didn't know much about the story at all and I found the style in which the show was told to be both very interesting and at times slightly frustrating. Frustrating in that often only excerpts of songs I love were played and not the whole thing! The story itself hung together very well, was full of humour and sadness and at all times was really clear leaving you in no doubt who everyone was.  I also loved the way that the narrator changed throughout the show so we did get a rounded picture of the story, it really was about the Jersey Boys and not one person.

The cast were incredible and their voices so like the originals that I'd have thought they were miming if I'd seen a clip on TV.  It was an incredibly hot and humid night when we went yet they put their all into it and the singing and choreography was perfect throughout. My one possible quibble is that perhaps the writers didn't quite know how to finish the show as it did just abruptly stop, however as this gave the cast a chance to sing again it wasn't all bad. Seeing the live band throughout the show was a bonus and they deserved every cheer.

If the point of a hit musical like this is to leave you with a smile and humming the songs I'd say this was a real hit, and I think that if I got the chance I'd go and see it again in a flash.
Posted by Sarah at 10:23 am 2 comments: 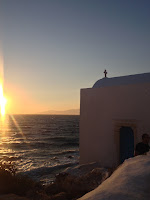 Mr Norfolkbookworm and I have just spent two weeks on the Greek island of Mykonos. It was an interesting time to be in Greece with all of their financial troubles and the referendum but at no point were we ever greeted with anything other than smiles. We certainly added to the economy by eating and drinking lots of wonderful items - although we'll gloss over the sea urchins...

While we did do lots of exploring the main purpose of the trip was to unwind and spend lots of time reading.  I certainly managed this as in 2 weeks I read 23 books as well as plenty of relaxing.

Not a bad collection of books, none that I gave up on this time.  Now I have to go to the library and pick up all the books I've reserved and are now ready to read...I'll need another holiday to get through them all! 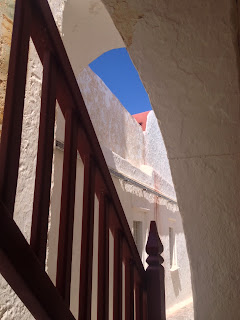 All of these books except Sagan 1954 were read as eBooks and those marked  * were proofs provided by Netgalley.com