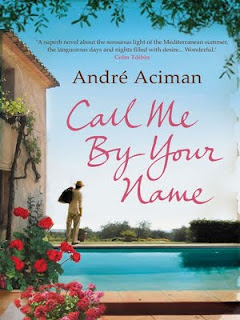 Call Me By Your Name - Andre Aciman

This was recommended to me by a friend who has very similar tastes to me when it comes to fiction. I read it first last year and then when I saw it on the shelf in the library I knew I had to read it again.

It is a love story set during a few crazy weeks in the Italian summer. It doesn't matter that this is an unconventional love story, between a teenager and a slightly older man, nor that the teenager is also male. It is simply a book about the madness and obsession that is first love.

The writing is so good that as you read the book you feel you are in a hot Italian summer. I read it on a typical English August day (cold and wet!) but I was transported to Italy, I could feel the Mediterranean heat soak into me as I was reading, I could have been sitting on a beach or beside a pool and not on a crowded train.

A little like most first love the passionate affair does come to an end, but in a realistic way that is hopeful and not depressing. The pair always know that there is an end date to their summer and that things will change when Oliver returns to his American life.

This isn't really what could be called a gentle book, at times it is pretty explicit, but to me it felt just right - a true romantic novel.

Aciman has written another novel and I will probably read it soon, but this book was just so perfect that I wonder if another book will be as good. 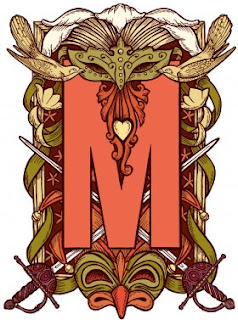 Much Ado About Nothing, Globe Theatre, August 2011.

I saw this earlier in the year with Mr Norfolkbookworm but seeing it again with friends was no hardship at all.

It turned out to be quite a different experience due to the wonderful English weather. The forecast wasn't great but we had hoped that the weather was going to hold off until after the performance.

We were very lucky, we had great seats, Row A in the Lower Gallery and as there was no wind we did stay dry, unlike the poor groundlings and actors.

The play was as funny on second viewing as it was earlier in the year and this time had the added bonus of the actors ad libbing weather related lines into the script - Benedick whistling 'Raindrops Keep Falling on my Head' whilst standing at the edge of the stage was wonderfully amusing, probably down to his facial expressions.

I did feel sorry for the actors however, as any sitting or laying moments of the play must have been very uncomfortable with rain pouring down as well as being on the wet ground. I can't imagine that the Tudor costumes are that comfortable when dry let alone when drenched by an August downpour.

The one dampener (!) on the day was indirectly caused by the weather - at times it was hard to hear the actors due to the noise the rain was making as it hit the waterproof coats worn by the groundlings.

On the whole the weather didn't matter too much, and the Globe is fast becoming one of my favourite venues (especially since I found out about the back rests!) 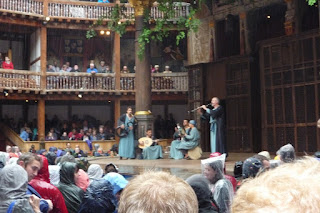 A sneak picture taken just before the start of the play, if you look top let you can see the rain.
Posted by Sarah at 5:00 pm 3 comments: 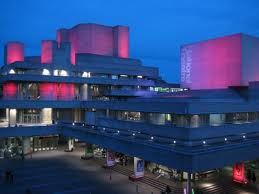 Since my first trip to see a performance at the National Theatre earlier this year I've been keeping a regular eye on their website, whether it is looking at future productions, the shop or photos from past productions. One thing kept catching my eye - the behind the scenes tour.

I finally got to go on this last week with a good friend. The day turned into a bit of a disaster but our visit to the National was out of this world, and a bargain.

After meeting in the foyer our knowledgeable and enthusiastic guide took us on a tour of the three stages (Oliver, Cottesloe and Lyttleton) as well as behind the stages, through the workshops and past the dressing rooms.

The tour struck just the right amount of theatre knowledge, promotion of the venue itself and technical knowledge. Our guide was very careful to keep all talk of productions very general so that anyone seeing a show didn't have anything 'spoiled' but still managed to explain how each of the current productions was staged and produced.

The National Theatre felt recognisable to me from the first moment I stepped through the door and I discovered that the architect of the building - Denys Lasdun - was also the architect of my former university (UEA), no wonder the shapes and interiors felt familiar!

As well as the general staging we were also shown how as much as possible it created in house at the National and got up close and personal with some of the props from former plays - I don't think I'll ever forget the explanation of how they made a tortoise explode on stage...

If you have a passing interest in seeing behind the scenes of a working, modern theatre then I really recommend this tour. I know that I will want to go again when other plays are in rep so that I can see the stages in different configurations and with other sets to view. 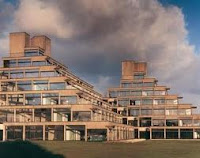 UEA, Norwich also designed by Lasdun
Posted by Sarah at 9:31 pm No comments:

I think that I've made it very clear that I am a huge supporter of libraries, and not just because I am employed by one.

I am fortunate to work for a council that sees libraries as a high priority but this isn't the case nationwide.

Libraries are important for many reasons and I urge every one to make their voice heard and let the government know that even in these times of economic hardship it is stupid to close libraries:

In which I fall for the hype... 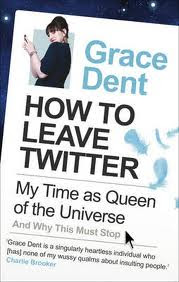 A few weeks ago everywhere you looked on social media sites this book was being talked about and recommended. I decided I wanted t read the book to see what the fuss was all about but I couldn't be bothered to buy the book so I reserved it from the library. It was obviously popular as I only got a copy to read at the very end of last week.

I don't often do this but I can't find anything positive to say about the book. I thought that it was going to be a silly read but I didn't expect it to be quite so nasty.

Dent tweets a lot, worries that she spends too much time on Twitter and gets cross with how other people use Twitter. That's it.

And that is it.

To write a book mocking people who don't agree with you is pointless, there are a few good netiquette points in the book but it was a total waste of my time and the paper it is printed on. I'm guessing that all the people talking about it on Twitter are either Dent's friends or her publisher. At least she didn't break her own rule and re-tweet all of their gushing reviews.

Never have I been so pleased that I borrowed a book for free from a library. 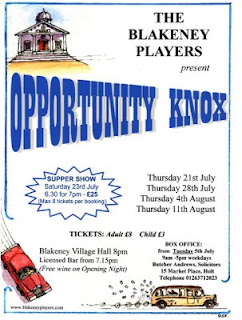 This is a very, very different theatrical experience to the ones I've been having recently but one that I wouldn't miss for the world.

The Blakeney Players are an amateur dramatics group on the Norfolk Coast who put on 2 shows a year. Shows that they write themselves and that are full of songs and dances that play to the Players' strengths. Every show is side-splittingly funny (sometimes not intentionally), witty and always a pleasure to watch. As the director of this show put it - it is possible that the actors enjoy the shows more than the audiences!

This summer's play 'Opportunity Knox' sees a group of bank robbers travelling around Europe pretending to be competitors in the 'Europe's Got Talent' competition.
Their acts...
..that would be an ABBA Tribute act and a couple pretending to be a ventriloquist and his dummy (she's lost her passport so they pretend she's a mannequin to get through immigration at Dover - obviously)
Police in several countries are baffled and so who better to catch the criminals than Lady Penelope, Parker and the boys from International Rescue!
It was as surreal as it sounds (and gets worse by the end) but every detail was perfect, the acting very amusing and the 'special effects' incredible.

There were only 4 performances of this show and all of them were sold out. It deserved to be.

You can't compare something like this to the productions I am seeing in London but I look forward to each and every show that the Players put on as much as I do my trips to London - just in a slightly different way. 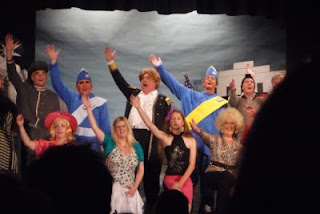 This is where I confess that I know one of the Players and perhaps this review isn't quite as impartial as perhaps some of my others are.
That not withstanding I urge anyone in Norfolk to keep and eye out for the dates of Players' winter show and to grab a ticket as soon as they go on sale!