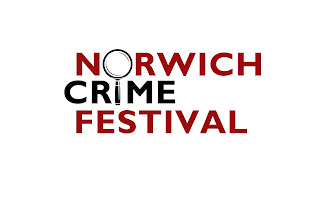 Phew! The first Norwich Crime Festival is more or less over. As I write this post there is just one book signing session to go.

On the whole the 10 days have been great fun, it is no secret that crime books as a whole aren't often my choice of reading matter but I have loved meeting so many varied authors and hearing their stories. I don't know if tales of my cowardice have done the rounds but none of the events were even that terrifying in the end, however gory some of the books might be.

Two events really do stand out for me.

The very first event of the festival was a coffee morning with Anne Zouroudi, the creator of the Greek Detective books. These are books I've liked for a while and it was great to hear how real life has influenced the work, how the Greeks feel about the books and to hear just how the author imagines her main character. I've always found myself transported to Greece as I've read the books and now knowing some of the stories behind the books I am going to go back to book one and reread them all.

My absolute favourite event, possibly of all time, was with Caroline Lawrence. The Roman Mystery books have pride of place on my shelves, I have a complete set of first editions and now all of them are signed. Although marketed as children's books there is so much history in them that I think everyone should read them, in fact before Mr Norfolkbookworm and I went to Rome I made him read several of the books and we even used them as guide books when we went to Ostia. (If you look closely at the photo of me at the top of the page you might even see that in it I am reading a Roman Mystery book sitting on a wall in Ostia)
Caroline's event was just like the books and appealed to adults just as much as children and the hour we had rushed by and was full of information, writing tips and artefacts. After hearing the talk you'll never take loo roll for granted again!
Caroline's new books are set in the American West and now knowing some of the background to these I can't wait to get my teeth into the first one of this series.

So what next?
I now have a list of recommended books as long as my arm, many new friends, a pile of thank you letters to write, many happy memories and about a week of sleep to catch up on.

Oh and the Norwich Crime Festival 2013 to start planning!

A rare picture of me taken with Caroline Lawrence at the event on March 28th 2012
Posted by Sarah at 8:30 am 3 comments:

Coming late to the party 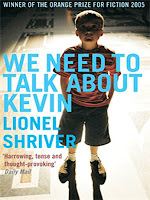 Mr Norfolkbookworm and I have just had a week away where we did nothing more strenuous than stroll from our apartment to a restaurant. It was heaven having nothing to do except read, chat and relax. Perhaps reading 18 books in 8 days was a little excessive however.

There were a few turkeys among the books but on the whole they were all pretty good. One stood out however:

We Need to Talk About Kevin by Lionel Shriver.

This was a big book when it was first released and I know that I did have a copy at some point but that I never got beyond the first few pages. I can't remember if it was the font used in the book, the style or the hype that put me off.

This year two close friends have been really encouraging me to give the book another go and I am so pleased that I listened to them because the book really blew me away. I knew the basic premise - Kevin commits a Columbine style crime, his mother isn't that surprised as he's been trouble since birth.
However the subtle nuances, the ambiguity and the tension were masterful and I'd managed to create an entirely different scenario in my head than the one that played out due to this skill. I was thus astounded by the end of the book.

I'm not going to see the new film though, as I don't think the pictures in my mind can be surpassed.

I also read the novel version of another film - The Descendants - and again I won't be watching the film. In this case because I thought the book was dreadful and can't see how the movie can be any different, even if George Clooney is the star!
Posted by Sarah at 8:55 pm 1 comment: 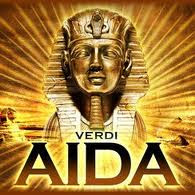 This was a new theatrical experience for me - an opera, in Italian and staged in the round.

I'm not a stranger to opera in some ways as my parents like the music a lot and CDs of various operas were often playing when I was at living at home but actually seeing one was new.

Mr Norfolkbookworm and I went to one of the Christmas music extravaganzas at the Royal Albert Hall just before Christmas 2011 and picked up a leaflet for Aida, on mentioning it to my mum we discovered that it was my dad's favourite opera and thus the super secret birthday outing was concocted.

As there were four of us we booked seats in one of the boxes on the 2nd tier which was lovely, we had a pretty good view of all of the stage, the wonderful projections and the surtitles. We also had plenty of space to store our wet coats and umbrellas which was a great relief as the weather was a little inclement the day we went. Tea and coffee being delivered in the interval was a real luxury and meant no frantic queueing!

I don't know what I was expecting from an opera, I think I thought it would be a little stuffy and hard to follow but, this version at least, captivated me.

The actors, dancers and singers were all, in my opinion, very good. Their voices filled the Hall beautifully and event when the surtitles were brief the plot was easy to follow. The space in the Royal Albert Hall was used to the full, there was a fountain on stage at one point and sometimes the chorus were up above the 'gods' so the singing floated down in a truly beautiful way.

The score was performed by the Royal Philharmonic Orchestra and despite the scale of the venue every note could be heard. The people sitting next to us constantly referring to the RPO as 'the band' nearly had us all in hysterics, such wonderful music reduced to that!

I don't know that I am a convert to opera, I liked this fun, immersive style but when I've seen performances from the New York Met on the television it hasn't captivated me like this one did but never say never, and I am now looking for a good ballet to see to continue expanding my horizons.

The one thing that amuses me however is how sniffy critics can be about modern musicals and their 'thin' plots...to be honest Aida isn't a deep story and the characters all a little fickle. Of course opera is classical and culture so it is all okay - unlike musical theatre which is merely populist.
Posted by Sarah at 9:09 am No comments:

All quiet on the reading front

I've still not learned my lesson, despite my last post being all about how much I had to read I still found myself browsing Net Galley a lot in February and then downloading lots of new things to try.

I'm not sure if the books I tried have already been published in the USA or are in proof form still but they have been very hit and miss with me, and so far (sadly) more miss than hit. In fact there has only been one that I've actually finished.
Paris in Love by Eloisa James is a year in the life of an American family who move to Paris. It is a strange book, at times it seems like a diary, at others like a letter to an unknown recipient and at other times it is so disjointed it is like overhearing one half of a conversation with an over excited teenager.

I enjoyed it, mostly, and would love to spend longer than a weekend in Paris to discover some of the places that Eloisa talks about but if I ate all that she talks about I'd be spherical!

I'm about to go on holiday and I've downloaded a few more proofs to my Kindle - for free it is worth trying lots of new authors and genres I feel.
Posted by Sarah at 10:00 pm No comments: