Shakespeare 400 celebrations at the library.


Along with much of the country the library where I work has been marking the 400th anniversary of Shakespeare's death.  We curated a collection of books and films that were based on Shakespeare's plays, encouraged people to let us know their favourite plays and quotes and then also we've had some theatre in the library.

On April 23rd we hosted Simon Floyd as he performed Macbeth solo.  This was an incredible evening, watching one man transform himself into all of the roles with no costumes or props was incredible. Simon inhabited the play completely and I don't think that I've ever seen the Scottish play performed with such clarity and enthusiasm before.

That Simon had time to perform in the library to help us commemorate Shakespeare 400 was incredible as he also is part of the Common Lot theatre group who were actually in rehearsals to perform in the RSC Midsummer Night's Dream:  A Play for the Nation which opened here in the city just two days after our event.

On 20th May it was a reworking of  Hamlet performed by the Librarian Theatre company that filled the space.  This was again a cut down version this time with a handful of actors and a beautiful set. This group really reminded me of the travelling players from Shakespeare's time, all of their props and costumes fitted in the boot of one car, and the plot was stripped back to allow the small cast to double/triple parts without losing the story clarity.

These are not full reviews of either performance as I was at work during them and not able to give 100% of my attention to the productions as I was also keeping the library a suitable space for theatre but I heard/saw over 75% of both plays.

Neither of the originals are in my top 10 (or even top 20!) Shakespeare plays I thought these were excellent and a great way to get a feel for two of the Bard's classic plays - they used a lot of the original text but without the words sounding like a foreign language - and the cuts didn't detract from the main plots.

Theatre in the library has worked really well and I'm hoping that we can do more of this - members of the Librarian Theatre company are working on an adaptation of A Christmas Carol and hopefully we can host this in December! 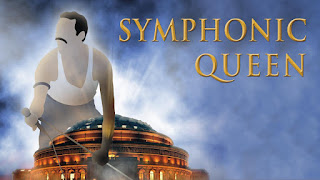 
The music of Queen has been important in our family for as long as I can recall.  As a child all of us liked listening to their music and both my sister and I remember clearly the band's performance at Live Aid in the mid 1980s.  I think that the Innuendo album was one of the very first CDs that my dad bought for the new CD player.  We never managed to see the original line up in concert - forget world peace etc. I am pretty sure that the first thing my sister and I would do with a time machine is get ourselves to a Queen concert!

On a very warm May evening my mum, sister and I went out to the Royal Albert Hall for this event, and again at least two of us when in with the wrong idea as to what was going to happen.  I know that I expected a staid classical music performance of Queen's music.  What we got was close to a full on rock concert!

Yes the music was played by the full Royal Philharmonic Orchestra but they were joined by 3 rock musicians and eight incredible singers.  The music translated wonderfully into this hybrid mix and soon the full venue was rocking along to the sound.

Many of my favourite tracks were played and in between the music a very amusing Ken Bruce gave information about the band, songs and where they were used. It sounds corny but on the night it was great and we all came out buzzing and how well the music translated into this new sound is just testament to how good the original tracks were.
Posted by Sarah at 8:22 am No comments: 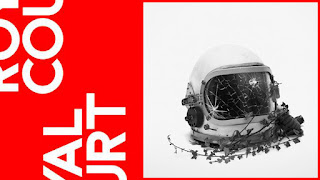 
I really don't know where to start with this play, and I think that the fault is with me.  From reviews I'd heard on the radio (possibly only half listened to as I was cooking) made me think I was going to see something that was going to be akin to The Martian or Red Dwarf - a comedy set in a space outpost.

It started out like that, a group of people are in a ship or base on Pluto and all of a sudden they fall out of communication with Earth. So far what I was expecting.

Then things got weird and it became more like a horror film, and then it got even more strange and while it will stay with me for a long time I am not sure at all what the play was about.  Dementia? Madness? Nightmare? Drug hallucination?

I'm not sure it matters in some way as Rebecca and I are still talking about it, looking for other theories on the meaning and generally being haunted by it.  It won't make my top 10 but I don't think it will be in the bottom three either, thought provoking is good.
Posted by Sarah at 9:52 am No comments:


On a lovely sunny, if not warm, evening Rebecca and I went out to Hampstead to see only the second performance ever of this play. Apart from the (in)famous film Lawrence of Arabia I didn't know an awful lot about the eponymous Lawrence and so I was hoping for a play that would add more to my knowledge while being enjoyable.

I got just what I wanted, and more.

The play is set in the early 1920s as Lawrence is hiding from the press after joining the RAF incognito. His hiding place is with George Bernard Shaw and his wife who are also helping him to edit his memoirs.

We are also treated to some flashbacks to Lawrence's time in Arabia during the war and how he worked with both the Arabs and the Allies during World War One.  The story telling was clear, the actors brilliant and although there were some modern political messages within the play they weren't added with a crowbar, they felt like things the characters at the time would have said.

The last play by Howard Brenton that we saw, Doctor Scroggy's War, had a good premise but was muddled and felt like three plays mixed into one, but this was clean and informative.  I don't think that it is going to set anyone on fire but I now want to know more about Lawrence and the Shaws and have a stack of new books next to my bed ready to read.  I think that this play might end up in my 2016 Top Ten. 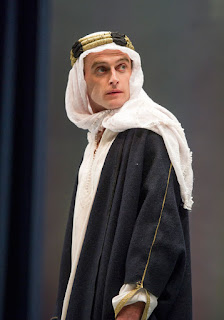 Jack Laksey as Lawrence (photo from Hampstead website)
Posted by Sarah at 9:39 am No comments:

I’m struggling with reading again at the moment.  I’ve just submitted my MA Dissertation* and I have free time to read without worrying I should be studying/writing.  I’ve also been poorly and have nothing to do with my time except relax – which for me usually means losing myself in a good book.

I’ve got heaps of books ready to go as well, lots of fiction of all sorts, advance copies of novels courtesy of Netgalley and also stacks of novels that friends have recommended over the last six months while I haven’t had time to enjoy them.

However I seem to have got out of the habit of reading fiction.  I can settle down with biographies, autobiographies, histories and the like but I can’t get into fiction however hard I try.

I’m hoping that this will pass soon; I often find this happens after I’ve had a real reading binge on holiday – I just didn’t expect it to happen in reverse so to speak.  Oh well, at least I’ve nearly caught up on all my non-fiction piles, I just can’t wait to lose myself in a novel again. I’m longing for the book hangover feeling! 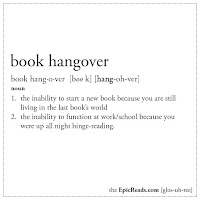 *14,973 words and called “Sex, Slavery and drugs: Is A Midsummer Night’s Dream suitable for children aged under ten?
Posted by Sarah at 4:33 pm No comments: