Theatre at the movies (again!) 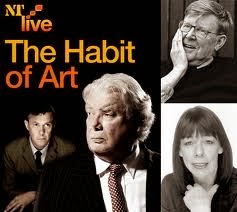 
After seeing a few plays by Alan Bennett, and always feeling slightly annoyed that the original History Boys passed  me by, I was really pleased when the National Theatre announced that they'd be broadcasting The Habit of Art as part of their 50th birthday celebrations.

Once more I went in without knowing anything about the play but as ever this didn't matter because the story was totally accessible and the plot comprehensible.  I quite like plays within plays and so from the off I was predisposed to like this one I suppose.

Like everything Alan Bennett writes this was very funny, very rude and very sly - I don't think I've laughed so much in public since I saw Noises Off! There wasn't quite the poignancy in the script as in more recent Bennett works, but that was provided by seeing the late Richard Griffiths on stage.  I do wish that I'd seen him in something live before he died - c'est la vie.

This was a great way to spend a cold, wet winter Monday and I am really pleased how many NTLive performances (as well as those from the RSC and Donmar Warehouse) have already been announced for 2014. Much as I like going to London seeing fabulous things like this in Norwich is a real treat.
Posted by Sarah at 4:12 pm No comments: 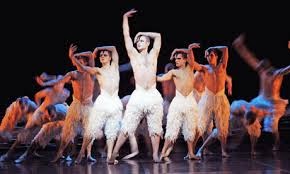 
Last year I tried opera for the first time and found that, at least the one I saw, wasn't for me. Since then I've been thinking about ballet and trying to find one to see.  The version of Romeo and Juliet choreographed by Macmillan has been recommended but I'd also heard a lot about the Matthew Bourne's staging of Swan Lake, thus when I found out it was coming to Norwich I knew I had to see it.

Now before seeing it I knew nothing about the ballet or the story at all (I've not even seen Black Swan) and I decided that I wouldn't  look it up. I wondered if a whole story could be told completely through music and dance only.

I'm pleased to say that it really can, well at least in this version it really can. From curtain up in act one right through to the end I was spellbound, and by the end I did have tears rolling down my face. How talented are the dancers that I really forgot I was watching men on the stage but just saw swans gracefully moving and then violently reacting?

I know that some people who read my blog are going to see this later in the tour and so I'm not going to say much more - I want the impact for them to be as great as it was for me, but I am looking forward to talking with them about it afterwards!

I shall be eagerly scanning the theatre guides looking for more Matthew Bourne productions and equally really searching for a ballet to see at the Coliseum in London complete with live orchestra. Suggestions of what to see gratefully received.
Posted by Sarah at 3:30 pm No comments: 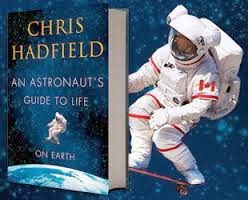 An Astronaut's Guide to Life on Earth - Chris Hadfield


I think that regular readers of my thoughts will realise that I have three main interests - reading, the theatre and manned space flight.  When two of these combine it is a real treat.

Commander Chris Hadfield was the first Canadian commander of the International Space Station during his nearly 6 months in space earlier in 2013. In that time his use of social media to share his experiences made him probably the best known astronaut since Neil Armstrong.

Just 6 months after his return to Earth, after spending the preceding 5 months in space, Hadfield has published his autobiography. I am guessing that perhaps he'd been working on it prior to flight as nothing about it feels rushed or incomplete, it is just a delight to read from cover to cover.

I've read a lot of astronaut (and cosmonaut) memoirs and this is easily in my top three.  Hadfield decided he wanted to be an astronaut in July 1969 as he watched Armstrong and Aldrin walk on the moon and set out in a very single minded fashion to make his dream come true.

However he is Canadian and despite this determination he seems unable to be nasty as he achieves his dream.he always comes across as a very nice person, Throughout the book recognises that he must have talent and ability but he remains humble and charts his mistakes clearly and gives tips for how he thinks a person should behave to get ahead and remain well liked.

The book doesn't contain too many technological details but I did learn a lot more about the other aspects of training, I also know more about going to the loo in space than I did before.  Hadfield drops tiny tidbits of gossip but never names names which just makes me want to read more, he is also far more open about his health problems before, during and after flight than I've ever known an astronaut be before.

If you only got interested in the space programme thanks to following @Cmdr_Hadfield you won't be disappointed in the book, and if like me you have a deeper interest I don't think you'll regret reading this book for moment.

Now if you'll excuse me I am off to haunt the website to see if I can meet Commander Hadfield when he is in the UK next month but I do urge you to watch his version of Space Oddity - the book tells you just how the video was made!

I've been delaying writing this theatre visit up as even a few weeks on I am not sure how to do so fairly.

Rebecca and I were lucky enough to secure tickets to the very first preview performance of this revival and so in many ways this was like seeing a work in progress and it doesn't seem kind to write about it.

It was a really interesting experience to see something that no one else had before, it had a stellar cast that threw everything they had into the performance and the first act was brilliant - fast paced, tense and just enough black humour to counter balance that.  It didn't matter that as an audience member I didn't really know what what going on - I've come to realise that it what I was supposed to feel as it is what the main characters on the stage are also feeling.

Act 2 wasn't as great, for me it was overlong with less humour. This time not really understanding the characters' motivation really meant I felt too far at sea to enjoy the experience fully.

However this was the first public performance and I am sure that if I was to revisit some of these points, especially the run time, would have been addressed. Sadly I just didn't like it enough to want to look out for the chance to see it again.

I do think that the problems I have with Mojo are all my own, many of the reviews I've read are much more positive and I must stress that there wasn't a weak link on stage. Perhaps I'm just too immersed in 450 year old plays at the moment to appreciate a modern play?

Mojo 'opens' on November 13th and I think that it will get pretty good reviews and with a cast including Ron Weasley, Merlin and Q from Bond it is always going to find an audience!
Posted by Sarah at 2:52 pm No comments: