I was vaguely interested in this when it had a London run, just not enough to plan a trip to the capital to see it, so finding out that Norwich was on the tour schedule came as a nice surprise.

I am really not at all sure what to make of the show however.

Visually it was stunning, the scenery and set were inventive, fun and worked in harmony with the rest of the show,  The costumes were also good - it did look a lot like the animation had come to life.  The cast were okay too with a couple of real standouts.  Just sadly the parts just didn't all come together to make this a 'wow' event for me.

I think that on the whole I blame the score and the sound for my feelings.  The songs were all original to the show - this is not a 'jukebox' musical like Mamma Mia or We Will Rock You, and yet unlike other original shows (Phantom, Miss Saigon etc) the songs were not catchy and for a lot of the time I found them to be incomprehensible and was wishing for subtitles! Duets and ensemble numbers seemed badly balanced and again often inaudible.

Bits of this show had me in absolute stitches - the drop in gags about other musicals were very funny, and Lord Farquaad stole the show every time he appeared on the stage.  The dragon was brilliant too - again puppetry proving that you don't need expensive animatronics to create effects. The scene with the Pied Piper and the rats was very well done too.  I just expected a little bit more.

It was a fun evening, I did laugh a lot and thanks to the end number I did come out humming a tune which is what you want from a musical but it just wasn't quite the fabulous experience I was  expecting and I'm glad I didn't travel too far to see it. 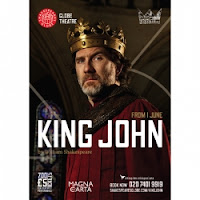 
Completely by accident I managed to book us tickets for this show just one day before the 800th anniversary of the signing of Magna Carta by King John in 1215.  Of course he didn't stick to it but this is what he is probably best remembered for in history.

Shakespeare's King John doesn't mention the document at all, and in this production it is name checked thanks to lines from another play The Troublesome Reign of John, King of England being incorporated to the script - it has to be said this was very well done as I had only read the play a few days before seeing the production and I couldn't spot any 'sore thumb' lines.

This production has been touring around the country and the staging was very striking in the Globe setting, with a big walk way stretching into the Groundling area as well as two extra parts of stage to either side of this - sadly from where we were sitting in the Upper Gallery we couldn't see these although the acoustics of the venue did mean that we didn't miss a word. 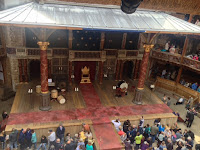 The view from our seats, the walk way went on much longer and there were two other free standing stage areas.

King John is about succession, relations with France and relations with the Papacy. The falling out with the British aristocracy which so marred John's actual rule is a very small side story towards the end of the play.  For such an episodic play I found the narrative clear and followed the twists easily, although some of the cross casting did seem to confuse a few people sitting near us.  I think that I might have been more confused had I not read the play in advance of seeing it!

The first act of the play had some amazingly strong female characters - some of the strongest I've seen in Shakespeare - and I loved the idea that as well being, possibly, not the legitimate ruler of England John was also still ruled by his mother.  The three main women are sadly forgotten by the second half (original play and not directing choice) but they certainly drive the first half and in many ways set up the action for the second.

As for King John - I couldn't help but like him as he was certainly channelling King John as portrayed in the Disney cartoon Robin Hood and that has always been my favourite classic Disney film even though it is very cheesy!

I wasn't sure of the production at the interval but it has grown on me.  The simple staging was good and it was nice to see the musicians so clearly during the production but after a while they did become a little distracting and made the stage seem cluttered.

Minor niggles as I did like the play overall just a little sad that we did miss so much of the action visually.

Random thoughts about books and authors

A lot of tweets in my time line have been about sexism lately, and not just from the @EverydaySexism feed.  Fuel was added to the fire this week when Sir Tim Hunt, a Nobel Prize winning scientist, called for segregated laboratories as women were just too distracting to work with, and cried too much.  I may have oversimplified his points here but like a lot of people he made me very cross.  The comeback on Twitter were great with people (men and women) posting photos of themselves at work in the scientific world with the tag #DistractinglySexy.

I am lucky in the way that I have never felt discriminated against for being female but I have regularly experienced sexism, probably from people who are unaware their behaviour can be thought of as such.  For example I am a keen photographer and I am looking to buy some new equipment in the next year or so.  Mr Norfolkbookworm and I went to a camera shop and although it was me with the good camera around my neck, trying new models and asking questions the salesman repeatedly spoke only to M and handed him all the cameras to try.  Little things like that happen far too often.

However I am not sure how I feel about one response to this from the book world.  Recently an author I admire made the 'provocation' that 2018 should be a year when only women writers are published.  This is in response to another study that has shown that books about women are less likely to win book prizes.

I am what you could call a prolific reader, from my journal I can see that so far this year I have read 81 books.

46 of these have been by male authors.  Now as I am studying Shakespeare and other dramatists from the late 16th Century I thought I'd take these out of the totals...

And if I am honest I am quite happy with that.  I read a book because it appeals to me not because of the gender of the author.  In fact due to another project that I'll talk about later in the year a further twelve books I've read this year have been selected for me and I've had no say on the gender of the author and again this has had no bearing on my views of the books.

To me a book is either good or it isn't and that has nothing to do with the author's gender, it is about the subject.  I like historical fiction, 16th century plays, and Greek and Roman classics - these are traditionally by men and about men and I know my life would be poorer.

I think that as women we do need to pull down barriers and make sure that sexism is relegated to a thing of the past but I am not sure that publishing female authors only is the way forward. I'm still thinking about this a lot and these are just two of the thoughts going around in my mind...

The book trade has always seemed a heavily female dominated industry to me and yet the books are about men...

Are there more books about/by men because as a rule women read more and will read widely where as men need encouraging to read.... 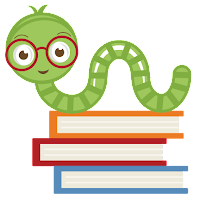 For those interested my book stats at the nearly half way point in the year are:

many thanks to my friend Sam @samruddock who blogs here for really making me think about this with a random tweet about his reading habits. 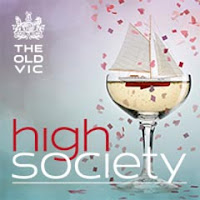 
As a rule Rebecca and I don't see many musicals but this one proved too tempting - a venue we like, at least one actor that we admire and an impressive artistic director - it all added up to a must see.  Added to that very reasonable ticket prices and no planned engineering works/strikes on the trains meant we skipped off to London midweek quite happily.

I certainly wasn't sure what we were going to see - I'd neither seen the film version of High Society nor The Philadelphia Story but that didn't matter as the story telling on stage was very clear from the beginning.  We were in a wealthy American household, somewhere on the East Coast, to celebrate the second marriage of a wealthy woman.  That the groom to be wasn't suitable or liked was obvious.  Thrown into the mix was the ex-husband (much loved by the rest of the family) and a threatened scandal involving a journalist and photographer...

That the plot was so clear was a real plus point as often I found the sound balance to be out meaning that the dialogue was unclear, occasionally inaudible, especially during some of the musical numbers.
The staging also baffled me.  Currently the Old Vic is configured into the round and so the stage space itself felt very cramped, and in some seats the audience had no where to put their feet save on the acting space. This stage design did allow for multiple entrance and exit points which were well used and it was well used in an acting sense - no part of the auditorium felt like it was neglected/unplayed - but for me I thought the production needed the pomp and status that a proscenium arch theatre can give.  As for the number of props needed for each scene and carried on by the ensemble, well I think that they may have had more stage time than the main cast.

Oh dear, this is all sounding terribly negative and while it wasn't the best afternoon at the theatre I've had it was still entertaining and a feast for the eyes.  I think I'd compare it to a Chinese takeaway - at the time you are satisfied but very quickly you realise that you are hungry again!

The highlights for me were certainly the male leads - Dexter, Mike and Uncle Willie plus the little sister Dinah.  They had great roles to perform and fabulous voices to do them justice.  There were some funny lines and witty staging but overall no more than pleasant fluff.  It all felt a little overblown in the wrong way and it really pains me to have to say so,
Posted by Sarah at 10:13 am No comments: