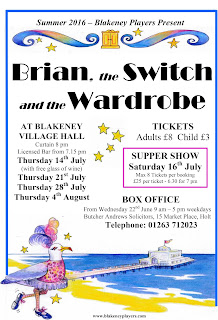 Brian, the Switch and the Wardrobe, Blakeney Player, Blakeney. July 2016.


as ever this cannot be an impartial review - the whole cast now feel like family that we just don't see too often!

It doesn't seem possibly that the year is already more than half over and that it is time for the Blakeney Player's summer show.  The weather always seems to be nice on these summer outings and it was a lovely drive up to the coast and we even had time for a nice Cromer Crab salad supper...but I digress.

Brian, the Switch and the Wardrobe was great fun, the audience is taken back to the Norfolk coast in 1958 at a time where the end of the pier theatre is falling down and the cast behind the times - a bigwig from London is invited to come along and save the day...

However this is all with the unique Player's take which takes the strengths of the players and then works the rest out around them. The new writers did this brilliantly and managed to give a new feel to the show whilst keeping the unique style we've come to love, the plot was very strong in this show. As ever the choreography is incredible but it has to be said the narrator stole the show for me.

No more details - tickets are still on sale go see it yourself!

I always love looking for the influences the group have used and in this one I certainly got aspects of The Play that Went Wrong as well as the obvious ones that are shown, the use of Spamalot also had me in stitches.

As ever I left Blakeney Village hall with a huge grin on my face and looking forward to the winter show!
Posted by Sarah at 2:39 pm No comments:


Huge disclaimer as James is a friend, but he hasn't asked me to review this book.

As a child I loved the Worst Witch books by Jill Murphy and as I wrote about recently I still enjoy the Harry Potter books now.  This book seemed to take bits from all the fantasy titles I love and make them better.

Arianwyn is an appealing character from the start, and as soon as I started reading I felt I knew her and that I wanted to be her friend. For the hero of a book she is neither too good, too perfect nor too hard done by.  Her nemesis and her friends are also well defined and her witches familiar is adorable. Possibly the resolution comes about a little too quickly but that might be due to the intended audience.

The book is aimed at a younger market than Potter, and slightly older than Mildred Hubble, but I think it has the potential to become a huge hit and a modern classic.  The book is complete in itself which is great but books 2 and 3 have already been commissioned which is brilliant news, I already can't wait.

I do have a few questions about Arianwyn's world that I want to ask James when I next see him but I will be buying a physical copy* ASAP and getting it signed for my nephew (he's a bit young yet but my sister or brother-in-law can read it to him) as I want him to be part of this world from the very start!

*I was in Greece for publication day of the book and so had to make sure I was on a wifi network to download the book as soon as possible!


Back from Greece for less than 24 hours and straight away I'm at the theatre - nice to see nothing changes!

Mary Poppins was a show that I'd dithered over for a while before biting the bullet and buying the (for Norwich) quite expensive tickets.  As a child I'd never watched the film and when Mr Norfolkbookworm and I sat down to watch it a couple of years ago I remember not being that impressed and only half watching it. However I am intrigued by P L Travers herself, especially in the light of her book about child evacuees to America during WW2 and the Saving Mr Banks film.

Reading the programme before going in raised my hopes more as we saw that the choreographer for the show was none other than Matthew Bourne.  I'm pleased to say that after watching this I no longer have the aversion to Poppins that I had before.

Although not being that familiar with the source film I could see that there were major differences but I liked this re-imagining. It wasn't as saccharine sweet as the film and it certainly wasn't as politically insensitive, Mrs Banks is no longer an absent parent figure but rather a woman struggling with the realities of life - she was an actress and is now trying to be a good/respectable upper-middle class wife.

Mary Poppins herself was also portrayed better for me, she is more human, less perfect and more "practically perfect!" The children were delightfully naughty, not just neglected and Bert nailed the role.  I'm not sure the addition of the 'bad character' was needed as she just became a little pantomime rather than real.

The fantasy scenes had been changed hugely - no dancing penguins, merry-go-rounds or tea parties on the ceiling. What replaced them were beautifully choreographed dance scenes lit to be totally Technicolor and visually stunning, with incredibly strong vocals.

The show wasn't perfect, I thought it was a little long and that it finished in the wrong place - there was a much  more obvious stop point for me...but on the whole it was a great night out.

Interestingly the creative team behind the reworking of this classic have just finished a new version of Half a Sixpence at Chichester which we are off to see next month - I think I will break my rules and watch the film version of this before going so I can compare it again to the new staging.
Posted by Sarah at 10:54 am No comments:

Mr Norfolkbookworm and I have just returned from Greece where we've spent two weeks absolutely falling in love with the island of Kefaloni/Cephallonia.  It has been an island we've wanted to visit for a while but we thought we'd let the 'Captain Corelli' effect die down.

While we had lots of time for reading and relaxing the beauty of the island sent us our exploring more than usual and so (for me) I did read less than usual during a two week break.  However this is all relative as I did still read 17 books!

In no particular order:


Kefalonia was a beautiful island, we're planning a return visit in a few years - more of my photos can be found here: https://www.flickr.com/photos/norfolkbookworm/albums/72157670924505955 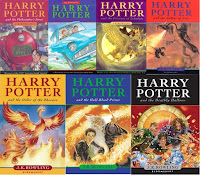 
There has been a lot of hype about Harry Potter (again) recently, this time because JK Rowling has written a new story, although it is a play rather than as a novel.  As yet I haven't managed to get tickets to the two part play but I do have a copy of the script on order and I thought I'd reread the 7 novels in advance of this.

The books were a huge part of my bookselling life. The second book had just come out when I started working in a bookshop and as I gravitated to the children's section from the start I read the two books very soon after starting (product knowledge!) and I know I shared them with Mr Norfolkbookworm. We both loved them and both bought into the hype of reading on publication day from book 3 -which incidentally embargoed until 3.45 so that no one would skive school to get the book.  I'm not even sure that there were that many fans at that point!

Since then I was involved in every launch with midnight parties getting every more elaborate and the need to avoid spoilers ever more important - especially when you are at work selling the book and not at home reading it!

However after racing through the books at publication I hadn't really returned to them at all so was looking forward to my mega-reread.

I wasn't disappointed in the main.  Reading them all together I could see how cleverly they were plotted right from the start and just how complete the world Rowling created was.  I raced through books 1-4 (this surprised me as I (mis)remembered no.4 as being very weak) but then really got stuck on no. 5.  After this blip I read the final two really quickly and was once more impressed by the scope of the books, even if I don't like the epilogue to the final book - however this may be important with the new play I gather...

I did wonder if I'd been swept up in the hype of the time, and then nostalgia, with my rosy view of the series but I wasn't. They are, in the main, damn fine books and however much it pains my sister as soon as my nephew is old enough I will be introducing him to this magical world.

Ps - should anyone have a spare ticket the the two plays please do think of me!