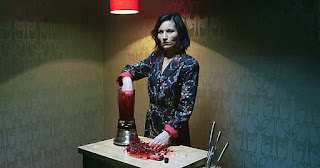 
After a surprisingly enjoyable Bakkhai and a throughly disappointing Oresteia I really wasn't sure what to expect with my third Greek play of the year, and this was possibly the best way to go in.

This was a retelling of the play with a very feminist slant which while being quite a good play I really am unlikely to have gone to see it without the title.

I am an oddity, I like Greek drama - I like seeing Greek drama as it was written (and yes that does include in the original language). I like the plots, the style and the language and not one of these elements was really present in this play.

However I didn't hate it, I liked the nods to the original, for example, as in the original,  Medea's husband has left her for a younger woman but in this version rather than actually being royal she is just her daddy's princess.  Other bits were funny and although not as good as in the Bakkai I liked what the chorus were trying to do.

However as a modern play about a woman breaking down after her husband has left her... it all felt a little bit like I'd seen or heard it before.  It was competent and I didn't hate it but if that was a person's introduction to classical Greek drama they are in for a big shock when they see a more authentic version.

Also unlike the poster intimates, and early images led me to believe, this was a remarkably violence free interpretation of the text and I think that it lost out because of that, I know that the idea was you don't have to use violence to hurt people but that is what the original is about.
Posted by Sarah at 3:44 pm No comments: 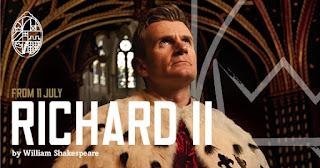 
After revisiting Hamlet and possibly enjoying it less than the first visit I was actually a little wary about seeing Richard II again. It was a good production earlier in the summer - what if it didn't live up to that, or what if I was wrong in thinking it to be good....

Fortunately I enjoyed our trip to this as much, or if not more than earlier in the season.  I still stand by my comments that too much of the Groundling space was used for acting, which meant that even in our top price seats we missed some of the action but my other niggle about line pacing had definitely been worked on.

I'd thought previously that the speed of delivery was supposed to indicate the King's state of mind and that was clearly the case.  At the start of the play when Richard is firmly in control he speaks slowly and in a measured way but as his monarchy, and his state of mind, unravels he speeds up and becomes frantic.  However in this final performance of the season there was a clear demarcation of the two speeds and no clarity was lost during delivery.

William Gaunt who has been playing John of Gaunt in the production was indisposed yesterday and as per the Globe's procedure (no understudy) his part was read by another actor.  I'm not sure how long W. Gaunt has been off but the stand in was almost word perfect yesterday and if we hadn't been told he was reading the script we'd have totally believed that Gaunt was a man of state papers hence them in his hand.

This was the last outdoor performance of the 2015 season and it ended it with speeches from the out going artistic director.  I'm looking forward to the season announcement for 2016, and celebrating the fact that it will be a female in charge of the theatre.  I am also nervous because it is Dominic Dromgoole's Globe (and Shakespeare) that I have fallen in love with.


I'm late getting this review up, uni has restarted and I had a short break away but even without these reasons I'd have found it hard to review this play.

Rebecca and I were hoping that with much better seats we'd love the play more. And indeed this time we were sat at the front of the circle and on the opposite side of the auditorium so in theory all should have been well...

While we could now see all of the balcony scenes, and they were worth seeing, we lost the wonderful depth and wonder of the stage and while not a lot of lines were given in this area the 'wow factor' was well and truly lost.

Once more we found that the actors weren't engaging/making eye contact with the auditorium and all three of us decided that it was a bit like watching the play on the television rather than live. Act One is also far too long!

I feel sorry for the third of our trio, she doesn't join us as often in our theatre trips and last year we dragged her along to the grim Richard III and this summer it was Hamlet... I think we all agreed that Cumberbatch was worth seeing but the rest of the cast were insipid still. Oh well perhaps I wasn't being overly grumpy in August, perhaps this really is a duff production!
Posted by Sarah at 10:43 am No comments: