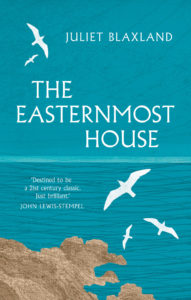 
Over the past 18 months we've been spending a lot more time outside walking and nature watching. At the same time I've also really enjoyed reading a lot more nature writing and when it comes to finding new books in this genre the Wainwright has been indispensable.

The longlist was great this year and I started to pick and choose books from it to dip into, I was really pleased that many of the books I'd really enjoyed made the cut to the shortlist.

Three of the books have strong links to East Anglia but my absolute standout (so far - I have 2 still to read!) has been The Easternmost House by Juliet Blaxland.

As the title suggests this is a book about the easternmost house in England. However pleasant this sounds it comes with a huge caveat - the house is perched on a cliff that is eroding away incredibly fast.

The book is split into 12 chapters, one for each month of the year, and is a meditation on country/coastal life in the twenty-first century. Knowing the area being talked about I am sure added a lot to my reading as it became illustrated in my mind as I turned the pages.

A lovely touch to the book was the chapter end page, in this Blaxland lists all of the produce that is in season as well as charting the erosion of the coast and the position of the house in relation to the sea.

I wouldn't be upset if any of the books on the list wins the prize but I will be crossing my fingers hard that others love this book as much as I do when it comes to the final announcement tomorrow.
Posted by Sarah at 12:00 pm No comments: 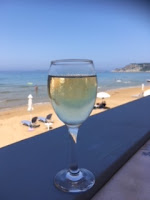 I had no idea that it was nearly 2 months since my last update - it has been a busy time but I think that I blame the heat/humidity since our return mostly for this big gap.

We had an amazing time on holiday, we were incredibly lazy while there and spent 13 out of the 14 days lounging around catching up on sleep, reading and sampling the wonderful local food & wine.

While by no means reaching pre-haemorrhage book totals I had made the right choice in saving up some of the fiction releases from the past few months and I think that these two in particular will feature highly on my end of the year round ups...


Those Who Were Loved by Victoria Hislop

Hislop has returned to modern Greek history for this book, and it charts the story of one Athenian family through the turbulent twentieth century. I knew that Greece had swung from right to left politically as well as from monarchy to junta but not a lot of the detail.
Hislop has told this tale through the story of four siblings and their grandmother and this allows all sides of the political spectrum to be explored as each character has different ideals.

My one reservation with the book is that I found the ending a little rushed, I wish that it was a two-parter. I wanted to spend more time with all of the characters!

A Thousand Ships by Natalie Haynes

This is another Greek book but this one took me back to the end of the Trojan War and was everything that Pat Barker's Silence of the Girls wasn't.  The premise in this retelling is that the poet Homer is trying to compose his epic tales but is a little stuck for inspiration, he has called on a muse to help and she is telling him the tale but from the viewpoint of all the women swept up in the chaos.

This was a great retelling of the Iliad and Odyssey and I liked the way the stories wove themselves together in a way that was utterly modern (and very funny at times) and yet reminiscent of the classics from Homer onwards. I'm loving this vogue for retelling the classics and hope that there are lots more to come.

Now we're back home a lot of my reservations from the library have come in, and I'm reading for one of my non-bloggable projects, so hopefully I'll have more books to talk about soon.