Biography of a year 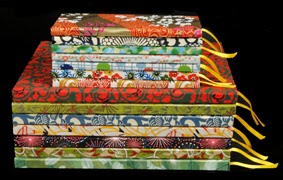 One Summer: America 1927 by Bill Bryson
That Fateful Year: 1914 by Mark Bostridge


It is no secret that I like to read non-fiction, in fact so far this year I've read a lot more fact than fiction but one new trend that I really like is the fashion for picking a year or a season and writing its biography.

Last year Bryson's 1927 made my top 5 books and I loved the way that he flitted from topic to topic, place to place, person to person but connected them all to tell the story of just a few months. I know his style is light and almost whimsical but it was also informative and got a lovely balance between being too scatty and too in depth.  I raced through it.

Mark Bostridge's book about 1914 can't be quite as light-hearted but he does manage to pick a wide variety of stories to show what England was like in the last few months before the First World War broke out.  He moves from child murder on a train, to the Prime Minister's love affair with a much younger woman to the serious situations caused by the Suffragettes and the Irish Troubles. The war almost sneaks up on you, and even by the end of 1914 the true horror hasn't quite hit home to most people.  There is also a lovely chapter all about the Burston School Strike here in Norfolk - something I'd heard of but not known much about.

Both authors manage to bring their subjects to life in a way that a straight history or the biography of just one person could never do.  They are popular reads not complicated reference tomes but they are good starting points and both have excellent bibliographies if you want to explore further. 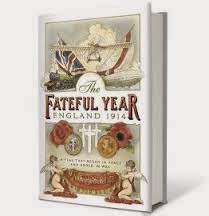 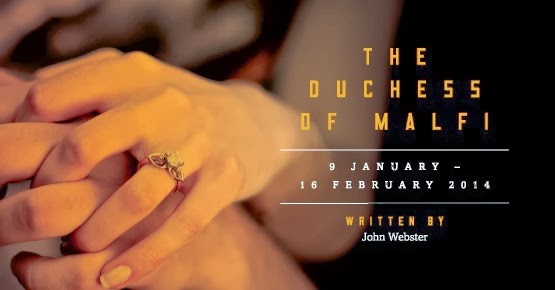 
I've been excited about this play for a long time, and even more so since I have been studying the theatres of the Jacobean era and first of all let me say that this didn't disappoint.

Over the past few years I've seen the outside of the new Playhouse take shape on visits to the Globe and I've also been following in the interior build thanks to the photos posted by The Globe on their website. A quick Google search shows the stages of the build and it has to be said that the CGI projections of what the finished building looked like were accurate but don't do it justice.

Inside it is like travelling in time (except thankfully without the aromas!) the theatre is all made of wood and lit with beeswax candles that are on movable chandeliers as well as some fixed candle sticks on the pillars.  Actors also carry candlesticks with them as they move about the space. The candles are also lit and extinguished throughout the performance so there is the lovely smell of wax and smoke at times too!

Now the play. I saw the Duchess of Malfi in 2012 and liked it very much, although looking back now I remember incidents and the Duchess clearly but the rest of the play and the actors have faded completely from my memory.
The version at the SWP managed to be physically lighter than the version I saw before, despite using no modern lighting. This made the impact of the darker scenes greater as you really noticed when the mood changed, it also meant that the characters themselves were more visible and I found all of the roles easy to distinguish and keep track of. Seeing the actors all of the time also meant that I got into the rhythm much quicker.
The flickering light and small space made the play feel very claustrophobic (in the right way) as an audience member you were complicit in the action and could see every small flicker of emotion on the characters' faces.

The horror scene however wasn't as effective in this version, I had forgotten when it occurred in the play but just didn't buy into the scene at all. However I did have many more goosebumps running up and down my arms throughout the play and it was scarier over all.

This version also lost a lot of the carnality I remember from the version at the Old Vic, however this did mean that we saw the action unfold rather than have it told to us.  Ferdinand's unhealthy obsession with his sister and descent into madness were much clearer in this version, and thoroughly creepy.

It was nice to see some of the main Globe's actors in a smaller space, and also to see similar styles of theatre from the open air stage scaled down but still visible in the new space.

However the new theatre isn't without problems, it feels cramped even after making use of the cloakroom. Leg room is an issue and Mr Norfolkbookworm with his long thigh bones was very uncomfortable. The Globe have always said that no seat in either of their Playhouses has a totally unrestricted view of the stage this is more true in the indoor theatre than ever. We had a very good view of the stage from our favourite area at the back of the Upper Gallery but even leaning forward we couldn't see the pit (unlike at the outdoor theatre) and seeing as the standing spots are twice the price of the Groundling area (listed on line as having the best view for only £5) the view from them appeared to be dreadful.

None of this has put me off, I'm going back in about 6 weeks to see the next Jacobean play performed. I loved the play and the playhouse but with a few reservations about the seating. 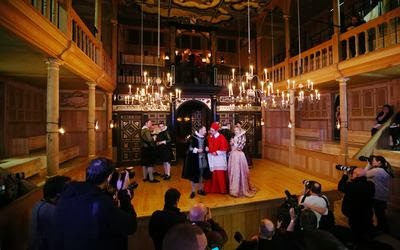 This images from Reuters gives a feel for the interior...
Posted by Sarah at 4:00 pm No comments: 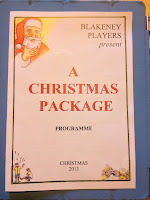 
As ever this review cannot be totally impartial as I do know one of the cast.

The opening number of this winter's show from the talented Blakeney Players put a lot of professional theatre to shame with the timing and choreography. Apart from at the ballet I don't know that I saw a better dance routine in 2013.

The story as ever is thin but that isn't the point of the play at all, it is about having fun - both for the cast and the audience - and I think that yesterday that was the case completely.  In 90 minutes we moved from dance routines to opera via pop songs and Punch and Judy. The action went from London to Moscow via Paris and Venice and Thunderbird 2 cooked the Christmas turkey in a very clever piece of staging.

The play also had the scariest scene I have ever seen on stage during a musical number where all the female case wore Olivia Newton-John masks and the men John Travolta ones - the result was scarier than any monster Doctor Who have come up with, including the Weeping Angels or the kid in a gas mask...

The scenery wobbled, the jokes were dreadful but as ever the enthusiasm made up for it all. One of the funniest things I've seen since their last play - I already can't wait for the summer show!

some of the cast - photo from the EDP website.

Nose to the grindstone 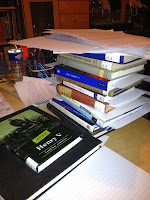 Versions on a theme.


2014 has started in a novel fashion for me - one that has involved no novels in fact.  I had two essays due in the middle of January and I have been holed up at home writing them.

Both were challenging in their own ways but I have been boring the pants off anyone who comes near me with the things I've been discovering.

There's more than one version of several Shakespeare plays. Some of these versions differ greatly to the one that we think we know today.  Hamlet for instance, in Quarto One, has half the number of lines, the story takes place in a different order and the "To be or not to be" speech doesn't appear. To be honest Hamlet is nowhere near my top 10 of Shakespeare's plays and I cheered to find a shorter version!

I've been looking into Henry V for the past month as the two versions of this text are both very different and quite similar.  The Quarto version makes for a very different play than the more familiar Folio and again an iconic speech is missing - this time "Once more unto the breach..."

Henry V is a deceptive play which ever version you read and I'm pleased  to report that even after studying it for a month, reading several versions, and many critical texts it remains one of my favourite plays.