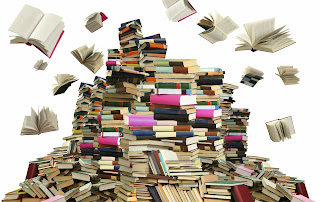 In 2013 my reading slowed down towards the end of the year as my studies started, sure I am still reading but now it is a lot of chapters from books or article journals rather than whole books from cover to cover.

That being said in 2013 I did still manage to read 218 books, a fair chunk of these were non-fiction and very few were re-reads. I think I read the least children's books ever this year too!

Picking my top reads was actually very hard - the top two came easily but after that I had to pour over my reading journal to narrow it down, and even then I had to cheat!  Please note that these lists are simply the best books I read this year and *not* the best books published this year!

Some of these choices surprise even me...I read Disclafani's book back in January and thought it was brilliant, but never expected it to stay in my top 10 let alone in my top 2 - it set the bar very high for all other books this year!

The Marlowe Papers is a book in verse and about the idea that Shakespeare's plays were written by Marlowe, I should have loathed it but instead found it gripping.  Equally I've not got on that well with many of Neil Gaiman's books (to the horror of my reading group) but yet this deceptively simple book has really stuck with me.

Honorable mentions in the non fiction category have to go to the 12 short books published by Penguin to celebrate the 150th birthday of the Tube especially 32 Stops by Danny Dorling about the Central Line which was a real eye-opener.

So far I've not seen many lists of books that are to be published in 2014 and so I don't know what to expect - I'm just hoping that the next Conn Iggulden book will be out soon, but as yet there is nothing on his website. 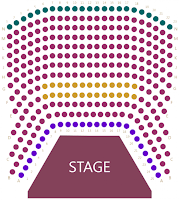 
A bumper year for theatre visits this year as I saw 34 productions live plus a handful of 'as lives' in the theatre.  Some things didn't live up to my expectations - People and Mojo spring to mind instantly for this category.

I met a play that I actively loathed - Macbeth at the Trafalgar Studios, but luckily the version staged later in the year at The Globe reminded me that I do like the play when it is done well.

In no particular order my top five theatrical performances from 2013 are:

Near misses from my top 5 included Privates on Parade, Proof, and The Snowman!

In 2014 I am already looking forward to visiting the new Sam Wanamaker Theatre, seeing King Lear with Simon Russell Beale at the National Theatre and all of the summer season at The Globe.

I'm also hoping that there is a revival of Journey's End soon as I really want to see it again and that the trope of having a toilet/vomiting on stage soon vanishes!


My love of theatre is possible spreading too far as on this outing I was accompanied by my dad, my sister and my 3 1/2 year old nephew.  Who in their right mind would take a pre-schooler to London, to the theatre, five days before Christmas...

I'm pleased to say that we had an absolutely brilliant time at this production. It is sensibly formed of two 45 minute acts telling the simple, well loved, story by Raymond Briggs. In the first half the little boy builds the snowman, he comes to life and they explore the house. Just before the interval the boy and snowman fly off the stage to the famous song We're Walking in the Air.

After a decent 20 minute break we come back and the duo are still flying but quickly land at the North Pole and have their adventures with Father Christmas and the other snowmen.  There are two added plot lines here as the Snowman falls in love with the snow queen and then has to fight Jack Frost for her love.  For once additions to a story fit completely and really do add to the tale.

Just like in the book and on the film after the pair fly home there is a thaw and the inevitable happens - which left the three adults in our party with a huge lumps in our throats.

Oh - and all of this is a ballet, not a word is uttered.

Unsurprisingly the audience was full of children at our matinee and I'm happy to say that they mostly behaved better than adult audiences at other plays I've seen! As for my nephew - he was pretty much on the edge of his seat throughout with his eyes like saucers in wonder. In his words, and echoed by us all, it was "magical".

I think that we'd all like to see this again next year but hopefully MummyNorfolkbookworm won't be poorly and she'll be able to come too... 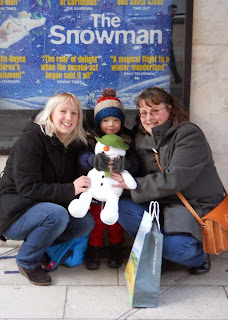 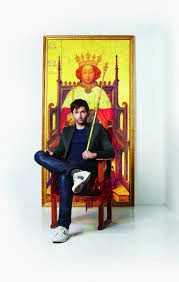 
This play is one of the ones that I've looked at in a little bit of detail this semester and so for the first time I went into the auditorium with some insight into the play. For which I am quite glad.

Whilst this was a good production, with actors who were clearly at home speaking Shakespeare's words clearly - as if they were normal dialogue and not something special -  the start of the first half to me seemed a little unclear.

From the reading I've done I knew why the King behaved as he did but I didn't see that on the stage. In fact the start of the play was only explained in the last half of the last act...

On the plus side other scenes that I'd read in the play but that hadn't made an impact on me for their importance did make a lot more sense on seeing them on the stage, but even then to make them stick out perhaps they were over played a little for some light relief in a dark play?

The plot of Richard II is very similar to that of Edward II (history does repeat itself after all!) and having seen both plays in quick succession I can say that while Edward II was quite frankly a little too experimental at times I found it was easier to understand why that King had to be deposed. In Richard II he was a little wishy-washy, vague and had too much self importance but the real reasons why his nobles felt he should go didn't come across. I know that in general it is better to show than to tell but in this case I thought we needed a little more of both!

I'm very pleased to have seen this production as David Tennant was very good but apart from his hair and the overall impression of the play I don't think anything else from the production will stay with me - it was a nice way to spend an afternoon but not a standout production for me. 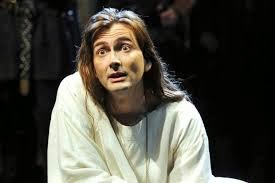 Making an exhibition of myself? 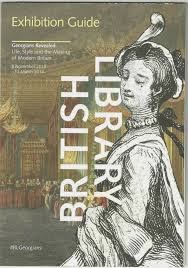 
A recent training day at the British Library has become one of my work highlights of the year.  We're going to be working on a very exciting project next year in conjunction with the BL and as a pre-Christmas treat 2 colleagues and I got to spend the day getting to know the library a little better.

We had a brief tour of the library including into one of the Reading Rooms and from that I now really do want to spend one day there during my MA if at all possible, although it is possible that I will find the silence too oppressive for good work!

After the training we had a couple of hours free and very kindly we were given free tickets to the latest exhibition in the library, all about the Georgians.  None of us knew much about the era but by the end we all wanted to read/reread the novels, go to a ball and try on the costumes.

The exhibition starts with a wonderfully innovative time line putting the period into historical and political context but then the main exhibition is all about the social side of the era using books and artifacts to illustrate this.  It was incredibly interesting and informative even with no real prior knowledge of the time and it would be easy to spend hours in the exhibition pouring over everything.  I was incredibly taken with the books about the formal dances, including the foot plans for people dancing a quadrille.  I have two left feet and could see I'd have been no asset at a ball.

The real highlight for the three of us was the 1799 map of London that has been turned into flooring just as you leave the exhibition. We spent ages working out where modern buildings were and what we recognised from today.  Also the chance to say we walked right across London is too good to miss!

The exhibition is on until March and even at £9 is worth every penny, I'm tempted to go back.
Posted by Sarah at 10:41 am No comments: 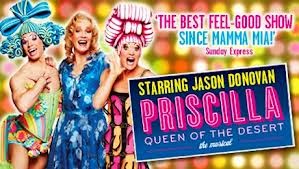 
Another great London production on tour in Norwich and this one came highly recommended by mum and dad - they saw it for their 40th wedding anniversary!

It has been a long time since I've watched the original movie but I think that this was a pretty good adaptation even if at times it did feel a little too fast so that the tension and pathos didn't have time to build. I don't think that this is the point of the show however as it is just a vehicle (pun intended) to showcase some good singing (except Jason Donovan's on the night we saw it!) and some amazing costumes.

The whole production was slick and shiny but for some reason I didn't quite come out with the full-on feel good factor I was hoping for, and that other musicals have left me with.  I wasn't humming any of the songs, and while I did enjoying myself on the night there are no stand out moments replaying themselves in my mind.  It also didn't manage to convey any of the coy naughtiness that I thought it might - but that may be because I saw an Alan Bennett play earlier in the day and that was rude!

I did enjoy my night but there is nothing in this musical that makes me want to see it again, which is a shame as I can see that it was a really good production! Mr Norfolkbookworm and I had seats in the stalls this time and although not sold as restricted view seats we did miss some of the action to the side of the stage, I'm wondering if all the really good bits happened there?!
Posted by Sarah at 12:00 pm No comments: