An evening with Alexei Leonov, Science Museum, London. May 2015.


What should have been a simple 'pop to London, have supper, meet a cosmonaut and come home again' evening turned into a near disaster this week - although of course not on the same scale of disasters that Alexei Leonov spoke about!  Trains conspired against us and instead of a leisurely ride we had a fraught drive to London but despite everything it was worth it.

This time the event was organised by the Science Museum and Starmus and we had the opportunity to hear the first man to walk in space - Cosmonaut Alexei Leonov - talk about his missions.  The event wasn't as well organised as those we go to in Pontefract, the doors opened late, there was lots of unexplained queueing and then a scrum in the auditorium but all of that faded away when the talk proper started. 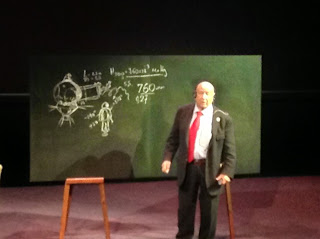 Leonov didn't use fancy technology for his talk, but rather sketched what he was describing onto a blackboard which was a lovely old school, interactive way to get across his message.  Like all of the best speakers on the space programme there was a perfect balance of science, anecdote, humour and tension in Leonov's talk.  Although it was clear that he had survived his missions the way he described the first ever space walk was heart in the mouth stuff and as nerve wracking fifty years later as it much have been at the time!

The human touches of the speech will always stick in my mind more than the technical aspects and I am left with the image of Alexei and his commander stuck in the wilds of Russia after landing stark naked in the middle of winter as they try to dry out their space suits a little!

The talk took a fine line between toeing the Soviet/Russian line of secrecy and positive spin and what seemed like Leonov's own desire to be open and honest but to be honest none of that mattered to me, I was just so pleased to have the chance to hear from another great from the early space programme.

Two things really struck me about the event - one was Leonov's wholehearted praise for British astronauts - Helen Sharman and Tim Peake, The other how hard the interpreters worked on the night.  Leonov spoke in Russian and this was turned into English by two very talented interpreters who kept up with his technical speech and humour wonderfully. I don't speak Russian but I could spot enough to be amused at their turning every 'Soviet' into 'Russian' regardless of what term would have been historically correct! I gather that there was also another team taking the English in to Russian for Leonov and the Russians in the audience.

After the hour long talk Leonov was created a Fellow of the Science Museum and then their was an opportunity to get an item signed by him.  This was by necessity short and sweet as Leonov, who is 81 next week, was obviously shattered after a long day of events, but I am very pleased to have been able to meet him and, in execrable Russian say Спасибо. 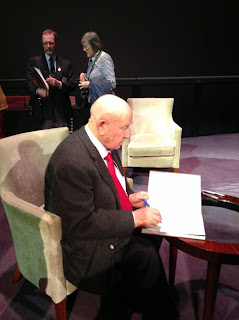 It turns out that some of the delay in the start of the event was because behind the scenes in the museum items on loan to London from Russia were being moved about ready for the Cosmonauts exhibition in the autumn - something else to look forward to!

The Merchant of Venice, Shakespeare's Globe, London. May 2015.


Just three days after seeing Romeo and Juliet with mum I was back at the Globe with Mr Norfolkbookworm although at one point the trains again seemed to be working against us and I wasn't certain we'd get there in time.

I'm so glad that we did get there because this is a glorious production from start to finish.  It had a huge cast compared to earlier in the week and sumptuous costumes and I really felt I was living in Venice and not twenty-first century England.

This version of the play gave a lot of humanity to Shylock - he is treated abominably by the Venetians and his insistence on the pound of flesh becomes far more understandable; however his treatment of his daughter and his lament for his money not her balances this out. He has become a complex character and not a pantomime villain nor a martyr.

I found the Venetian men to be arrogant and far more villainous in this staging but even then they were reined in enough that I still felt sympathy with them, and the reading of Antonio and Bassanio was heartbreaking.

I found the female characters to be fully rounded and fun to watch.  Portia's scenes with  her suitors were suitably funny but not overblown and her turn as the disguised lawyer was very well done - she was well enough disguised that when Bassanio failed to recognise her in the courtroom scene I could believe this. Jessica's scenes with her father - especially those in Hebrew - were brilliant, her scenes with her lover/husband slightly less so.

The other 'comic' character in the play was also suitably restrained, and rather than being tedious the small amount of Groundling interaction really worked.  There was just enough levity in the play to relieve the tension of the main plot but it never got out of hand.

The last time I saw this play I was left feeling uncomfortable about the way the inherent anti-Semitic plot strand was handled but in this version I found it to be sympathetically staged whilst still being abhorrent.  There was a clear delineation between Jessica's conversion and that of Shylock which made a very moving finale to the play. The ending did mean no jig but this was the right decision.

I did wonder how Jonathan Pryce would find the open space of the Globe theatre but he had me in the palm of his hand I hope he'll become a regular actor there.  The nice touch of casting his real life daughter as Jessica worked wonderfully too, stunt/celebrity casting at its best. 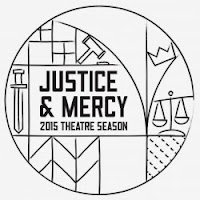 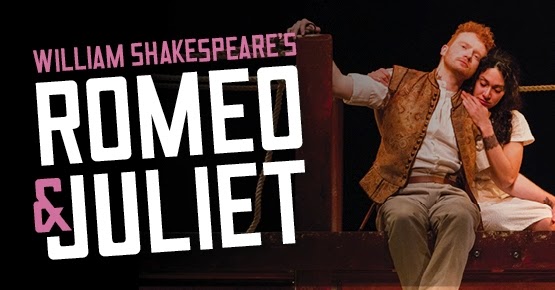 
My mum was my theatre companion for this trip with a long awaited Mother's Day present, and what a way to start the 2015 Justice and Mercy season.  In the last few months I've written two essays about this play but this was my first trip to see it on stage.

Called a stripped down version of the play on the website I worried that it was going to be very cut but what they meant was a minimal stage and only eight actors - but how hard these guys worked.  All except Romeo and Juliet played multiple parts and the costumes involved cloaks being pulled over beige trousers and white shirts.  It could have been a disaster...

...it wasn't. In fact it was spellbinding.  To avoid confusion with the doubled parts scenes would often play on top of each other - at the start I wasn't sure about this.  The initial brawl between the two houses with my favourite thumb biting lines played around the chorus' initial speech, then during the main body of the play half a scene with some characters - eg Juliet, her mother and the nurse - would freeze and half a scene with Romeo and his friends would happen.  It sounds terribly clumsy on the page like this but worked very well visually as it made it clear which role was being played at any one time.

This is a touring play that has a very short stay at the Globe and for that reason the interplay with the groundlings did seem less obvious than in Shakespeare plays that I've seen at the venue and more like the new plays performed there but while I noticed this it didn't detract or add anything in particular to the play.

I wasn't quite moved to tears by the end, I'm not sure that this venue is intimate enough for such emotions to happen or if I have just studied the text too much in the past few months. I was still transfixed throughout, as was most of the audience which contained some of the best behave school children I've ever seen at the Globe.

I do have one question about this production - what were the temporary tattoos for? The costumes were totally neutral with no date or place setting but the tattoos stuck out as incongruous, as there was so much doubling of parts they can't be explained as being to denote Capulet or Montague so I remain perplexed.

That being said this was a great day out and if the tour comes near you this year I really do recommend seeing it.  I'm considering going to Cambridge to see if an indoor venue is more intimate and emotion inducing. 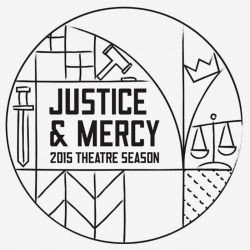