So much for not having so much time to blog - well I suppose I am reading less for fun currently and don't have so many book reviews to share.

This past weekend Rebecca and I had another of our London binges - this time two plays and two museums in the space of 36 hours (37 if you count the end of BST!). We were joined by another friend but she has more sense than us and just came for lunch and the first play - Marlowe's Edward II...

This was a mix of styles in performance as some of the actors were in period costume and others very much in modern dress. The same followed through with the set and staging and after a few moments to understand that this was the style I found that it didn't bother me too much. The swapping of genders for participants also took a while to settle in but the actors were so good this did also cease to be an issue.

The play itself is also a little bit of a mixture as it has a deceptively simple story line - bad king makes bad decisions and his lords rise up against him. However as plotting to overthrow a monarch is something best done in private how to show this, and all of the bad decisions, on stage...

This production used handheld cameras to follow the actors into less visible areas and at times there were two stories being told - the actors at the front of the stage and then the projected video feed on the walls to the side.

I think it worked.

I came away being bowled over by the quality of the actors and the power of the story but slightly less convinced on the staging.  The Oliver theatre has a wonderful revolving section and in my mind I'd imagined that being used to switch between parts of the story.

A lot of Edward's downfall comes about because he advances his (male) lovers politically and the existing nobles,naturally, don't particularly like this usurpation of their power. For me this play wasn't about their homophobia - when the king kisses his favourites (which he did a lot) the lords aren't shocked by this, or repulsed. It is the behaviour of the lovers as they flaunt their wealth, power and influence that enrages the establishment.

Gaveston (the King's lover and one cause of his downfall) was seated in the audience at the start and when he leapt from his seat and started talking to the stage I did wonder if there was an unhinged audience member. While this use of the whole theatre works at The Globe it felt a little awkward in this performance and made me long to see this either done in a more 'straight' fashion or actually at The Globe with full groundling participation.


This all sounds more negative than I actually felt on seeing the play as I enjoyed it a great deal.  It also makes an interesting comparison with this week's set uni text which is Richard II - another poor king who loses his life. 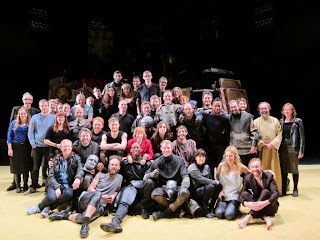 picture of the whole cast and crew of the play tweeted by the National Theatre and taken just after the curtain fell on the matinee that we saw.

Three years ago a friend told us about a version of Agamemnon that was being shown in Cambridge, intrigued we went and had a nice time. Intrigued because this is company that only perform every three years and when they do so it is in the original ancient Greek.

The trip didn't start well, one of the party couldn't make it and the main road from Norwich to Cambridge was shut but eventually Mr Norfolkbookworm and I met Rebecca at Cambridge station and set forth to the city. The run of bad luck seemed to continue as a phone stopped working and all the restaurants were full when it came to needing lunch. However we found sustenance and all seemed to be going well.

We had great seats in the theatre, lots of leg room and soon settled in for what we'd told Rebecca was a great experience, yes the plays might be in a dead language but that didn't matter - there were surtitles, no different than a foreign language film...

This cycle two plays were performed Prometheus before the interval and The Frogs after, tragedy then comedy.

Prometheus wasn't to any of our tastes although I can see that if you know the play/Greek it offered a lot more.   The plot was simple Prometheus has helped Zeus to over throw his father but then has helped out the human race and angered Zeus. Who has him chained to a rock.  The next 55 minutes or so are all about why he is there. With singing.  I can see from my studies into theatre why this is considered a good play and I can also see a lot of the aspects of drama that I've been reading about and I mean no offence to the cast when I say on the whole we didn't enjoy this one.

After the interval it was a different matter. The Frogs, and especially this version, is bonkers. The god Dionysus has decided that there are no longer any good jokes being written so he is going to have to go to the Underworld and bring Euripides or Aeschylus back to life in order to have some amusement.  The god is however a coward and this leads to much humour, oh and some ancient Greek politics (not that different from our own really!).

You really did have to be there to appreciate how funny and truly mad this play was, the jokes translate from stage to blog about as well as they do from ancient Greek to English - it really was all in the staging.  My mind melted when Charon and Dionysus are sitting in a row boat singing in Greek to the tune of O Sole Mio but the surtitles are showing the words to Row, Row, Row your Boat. Oh and apparently Greek frogs say brekekekex koax koax not ribbitt.

The day turned out to be great fun after all and I think Mr Norfolkbookworm and I will try to see the next play in 2016 but this really has reinforced to me that tragedies are my least favourite style of play overall, it isn't just Shakespeare! 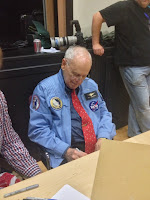 
This past weekend I was in the presence of a truly great and inspirational man. Thanks to the efforts of Ken Willoughby, and Space Lectures, Mr Norfolkbookworm and I had the opportunity to go and hear one of only 12 men to walk on the moon speak.

It may have been a little crazy to drive from Norwich to Pontefract for a 90 minute talk but in the week that we lost another space legend (Scott Carpenter - fourth American in space) it seemed like the right thing to do.

Captain Bean flew on Apollo 12 and also on the second Skylab mission but his talk was not a dry "we did this, then we did that" lecture it was profound, poignant, fascinating and funny. One of the other audience members has done a wonderful job transcribing the event and if you'd like to see what caused me to have a huge lump in my throat and to join in a spontaneous standing ovation I reccommend having a read. It isn't a dry nerdy thing at all and you need no particular knowledge of the space programme to enjoy it.

After the talk Captain Bean signed autographs for the audience and spent a few moments with everyone in the queue - all 470 of us...

I felt as start stuck as a teenager meeting One Direction!
Posted by Sarah at 3:50 pm No comments:


I was beginning to think that I was never going to see this play at its best as once more the weather forecast was dire for the day Rebecca and I headed to London.  Luckily the rain band seemed to sweep right round Southwark and we stayed mostly dry.

This was the first Shakespeare play I'd seen since starting my MA and it just so happened that the first unit was all about outdoor theatre and the staging of Tudor plays in their original environment.  I was very glad that I had seen this play earlier in the season as at least for the first half I was a little distracted by putting the things I'd read earlier in the week into context.

As ever with the Globe I couldn't stay distracted for long as the quality of the acting just had me spellbound and I really did feel that I was in the middle of a fairy inspired dream/nightmare.  My last minute seat was a restricted view (more so than some others at the theatre) and I couldn't actually see much of the mechanicals' scene. This reinforced to me something that keeps coming up in my reading - people went to hear a play in Shakespeare's time. I may not have been able to see the slap stick action but I didn't miss a second of it thanks to the writing!

The Globe 2013 Season of Plenty closed on 13th October, I'm already haunting the website for hints as to what is coming next year but also I can't wait for the Sam Wanamaker Playhouse to open in January so I can see how the Jacobean indoor theatre would have worked!
Posted by Sarah at 3:27 pm No comments:

I'm hoping that this won't be the case but there is the chance that postings on here may become fewer and may just be limited to theatre reviews until next summer as 18 years after I started my undergraduate degree at the wonderful University of East Anglia: 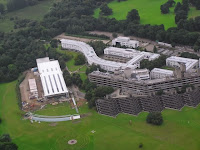 I am about to start an MA with the Shakespeare Institute at the University of Birmingham: 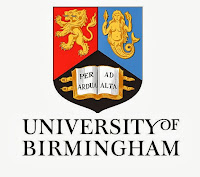 Expect lots of reviews of Shakespeare (as well as others when I can squeeze them in) but possibly not quite so many book reviews until I can treat myself to another book binge break!
Posted by Sarah at 2:37 pm No comments: