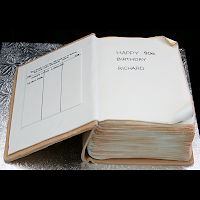 Wow - I really can't believe that I've had a blog for a whole year.

It has been a busy year, lots of travel, lots of reading and a new job and I haven't quite managed to average a blog post a week. Perhaps next year I'll get to this.

I'm actually quite proud of myself for managing to keep going with the blog as most of my diaries seem to peter out by June.

Right now I am reading an impulse book - Up in the Air by Walter Kirn. I haven't seen the film but the book is really enjoyable. After that I have a few proofs to look at and then I have the enjoyable job of choosing holiday reading. I'm really not sure what to take for my two weeks on a Greek Island so if you've read anything recently and think I might please do let me know.

Now on to more birthday cake I think!


Picture of the incredible cake taken from http://www.inspirations-cakes.co.uk/ - I wonder if I drop enough hints Mr Norfolk Bookworm will get me one of these for my next birthday?
Posted by Sarah at 7:27 pm No comments:

Labels: birthday, Up in the Air

One of the projects that I started through work was an International Literature Group.

Over the past 5 months a small group of us have attended monthly meetings where a lecturer from UEA has come along and taught us all about translating. Rather than all reading a set book we've all then been reading any book that has been translated into English and thinking about it using the guidelines given in the session. It has been great fun and I've really read my way around Europe this winter and spring. It has also been nice to think in more depth about what I'm reading, rather than just reading for pleasure. I miss studying sometimes.

May's challenge was a little different, our group was shadowing the Independent Foreign Fiction Prize. We'd been sent 4 of the six books to read, talk about and then review.

None of the four books was an easy read, and we had only limited time to read the four titles. I managed to get through 3 of them:

Philippe Claudel's Brodeck's Report (translated from the French by John Cullen.)
This was my favourite of the 3 read. On the face of it this was a simple book about a very rural village trying to put itself back together after WW2 and a dramatic event. The more you read however the deeper the story went and it really was like an onion - each layer was good but taken as a whole it was fantastic.
The themes covered were not easy and despite the apparent simplicity this was a book that had to be read slowly so that none of the detail was missed.

Julia Franck's The Blind Side of the Heart (translated from the German by Anthea Bell)
On the face of it this was the most appealing book, from a retail view point it looked like the most commercial too. Sadly it didn't live up to the cover.
The story starts with a most dramatic event - a mother abandons her child on a railway platform in what will become Russian East Germany, and then we go back into the mother's past to find out how she could do such a thing.
The problem with this one was that none of the characters captured me, it was obvious from the subject matter that none of them were nice, but they all remained flat on the paper and never came to life. The writing was also dull and the story stagnant. This could have been so good, and I was disappointed as it had won many prizes in Germany.

Alain Mabanckou's Broken Glass (translated from the French by Helen Stevenson)
This one was really not my cup of tea at all and even though I persevered for about 100 pages I'm still not sure what it was about.
The translation of this one really impressed me for not once in the text is there a full stop. To have the skill to translate a story with only commas for punctuation and keep it readable is a huge talent I feel.

I also had a copy of Rafik Schami's The Dark Side of Love (translated from the German by Anthea Bell) but although I do want to read this one it is a massive 853 pages long and I just ran out of time to read it before the prize was announced.

The prize was announced at a ceremony on Thursday, sadly our shadowing group wasn't picked as one to go to this party, and the winner was...

The next time our group meets, in June, we are going to discuss this one further and with our 'critical translation' hats on, rather than our 'should this win a prize' hats!

Thanks go to the Reading Agency for the chance to participate in this project.
Posted by Sarah at 7:43 am No comments: