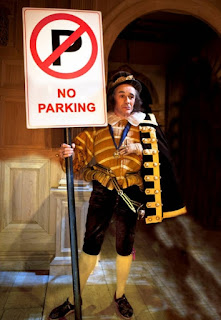 My top play of 2013 was The Globe's version of Richard III, I wasn't expecting this to be the case but it blew me away on both viewings.

I've also been following the story of the hunt for the real Richard III in Leicester with great interest since the story broke. The press conference earlier this month when the archaeologists announced that it really was his skeleton that had been found under a Leicester car park was the most gripping piece of broadcasting I've seen for a long time.

The subsequent programmes about the history surrounding the end of the Wars of the Roses has influenced my reading just lately.

I know that Shakespeare was a Tudor writer and so his version of events was always going to paint Richard and the Yorkists in a poor light but however engaging the play is I did wonder how accurate the play actually is.

The dig to find Richard III was funded in part by the Richard III society and the television programmes afterwards focused on this, and their quest to prove that he really was a nice guy and that none of the bad things we think about him are true at all. In someways their views and opinions are as extreme as Shakespeare's claims.

As ever I am pretty certain that the truth lies somewhere in the middle but I do wish I had a lot more time to look into this, however as every fiction comes to the rescue...

I've just finished reading Josephine Tey's Daughter of Time. The basic plot can be summarised thus: whilst bed-bound a detective decides to investigate the life and times of Richard III...

As I haven't done any of the research myself I don't know how accurate the story is but the case put forward in this book was compelling and I was totally gripped by the book. I'm probably very late to the party with this book as it was published in the 1950s but I do highly recommend it.

I've also just had an email telling me that Sharon Penman's Sunne in Splendour has just arrived at the library for me so I've another epic version of the tale to look forward too.

While it may seem strange that a Norfolkbookworm is so fascinated by a history that doesn't have a lot of links to Norfolk there is another side to the story.  I'm originally from Kent and we often took walks or cycle rides to Eastwell Lake. There is a ruined church to explore their and one of the tombs is for a Richard Plantagenet, according to legend he was an illegitimate son of Richard III.  Watch this space - it could be the next 'big dig' as more about the Wars of the Roses history is discovered! 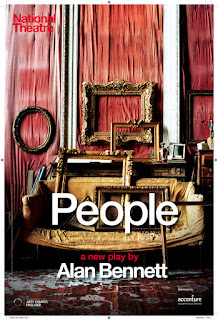 Due to the Writing Britain exhibition and week of events I am late in writing this review and I am finding it hard to write as a result.

This was our third Alan Bennett play in 2 months and this was the full length play rather than 'shorts'. The stage and settings looked very familiar however as Hymn and Cocktail Sticks use the same stage.

The premise of the play is that Dorothy has inherited a stately home which the family can no longer afford to maintain. Her sister wants her to hand it over to the National Trust but she isn't so sure and is contemplating selling precious family heirlooms or the house itself to private buyers. At one point she also considers renting it out as a location for 'adult movies'.

I found the separate strands of the play to all be good.  The characters were all drawn a little over-large and seemed to be caricatures of real people but on a large stage with a relatively small cast this wasn't too much of a problem. There was a reasonable amount of humour in the play but I did find Bennett's usual under current of sadness/pathos missing.
For me the strands just didn't quite come together to make a cohesive play, it was more than skits but less than a fully formed piece.

Bennett also has a lot to say about the National Trust - he recognises that they obviously do an enormous amount to save important things for the nation but that in doing so they definitely sanitise history. He is very convincing - and I did come out of the play feeling a little sheepish at having become a member of the NT last year!

As ever in a Bennett play there is one refrain that sticks with me and that really resonates even after a few week's reflection: PST. People Spoil Things.


This is going to be a terribly indulgent blog post as yesterday was the official launch for a project that I've been involved with for two and a half years and I am feeling tired, proud and just a little emotional.

I moved to Norwich in September 1998 to come to uni here, UEA was my first choice of place to study and not only for the course choice.  I'd had two holidays to Norfolk in the past - one family trip involving a day on the Broads and then a school holiday where brave teachers took 6 boat loads of teenagers on a week long boating holiday! The county weaves a spell over you and I feel like Marmite you either love it or loathe it.

Unlike Marmite I love my adopted county.

In the summer of 2012 the British Library held an exhibition celebrating the links between the landscape and the literature of the British Isles.  Thanks to the Paul Hamlyn Foundation partner libraries around the country were picked to host their own smaller scale exhibitions and projects.

Norfolk is a county of many landscapes: we have The Fens, The North Norfolk Coastline, the Brecks, Thetford Forest and of course the Broads.  It was the latter that we decided to focus on as they are unique to Norfolk (and Suffolk).

Even the Broads have a wide literary heritage and at first, with my bias for children's literature, I instantly thought of both Arthur Ransome and Anna Sewell as authors to pick.  When we thought more however we decided to take a different tack and showcase some very famous people but whose links to Norfolk may be less well known...

We decided on John Betjeman (who unlike me didn't have happy childhood holidays in Norfolk) and Harold Pinter (a man who refused to consider faking Norfolk when it came to filming The Go-Between).

As well as borrowing items from the British Library and holding an exhibition we also ran a project with a group of young people. They were taken on trips around the county, into our collections, to London and to art galleries and then they all came up with new pieces of literature based on their responses to Norfolk's landscape and history.

My colleague Charlotte took on this role in the project leaving me free to learn how to curate an exhibition.

This experience has been - in the words of many talent shows - a real journey.  And a test of patience. However in the past 10 days it has all come together wonderfully and last night at the launch I was very pleased with the results.

We had new museum grade exhibition cases made as part of the project and their arrival really did mark the start of the final preparations. They arrived a week before the loan items from the BL and so we filled them with treasures from our collection - including a holiday scrap book from the 1890s: 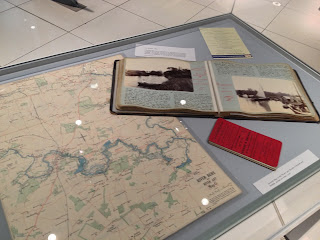 Then on Thursday 7th February a curator from the BL arrived with a secure briefcase filled with the manuscripts we were borrowing: 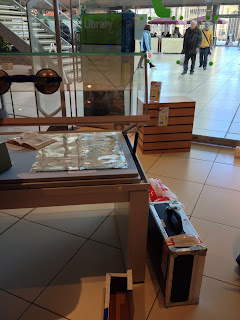 Before the items arrived the stress levels had been growing but once we saw the items being unpacked all of that melted away and it felt a little like Christmas.  In this folder there were hand written notes by Harold Pinter on how he envisioned scenes from the Go-Between film as well as some annotated, typewritten script pages: 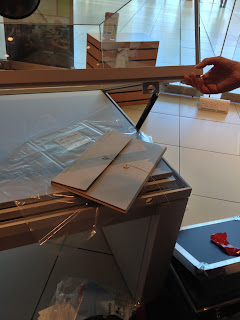 When the curator unwrapped the bound book of Betjeman correspondence, including a draft of the poem 'Norfolk'. John Betjeman wrote this poem after the death of his father and in it he is remembering the holidays they took together: 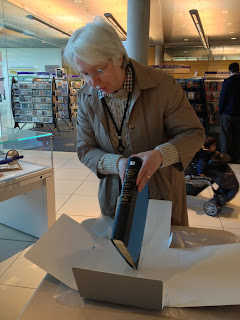 Friday was a calmer daytime but in the evening Charlotte and I had to install the exhibition, in quite a tight window as it all had to be done between 8pm and midnight.  To ease things we installed the library part first: 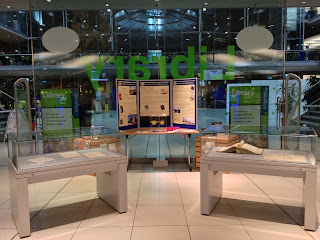 After a quick supper we moved out in to the Atrium of The Forum which is hosting the main part of the exhibition, as well as the results of our photography competition and some of the work created by the young people during their adventures: 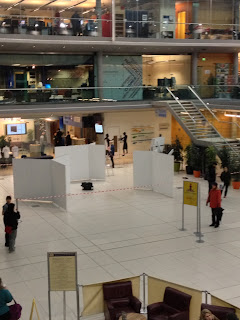 the space we had to fill 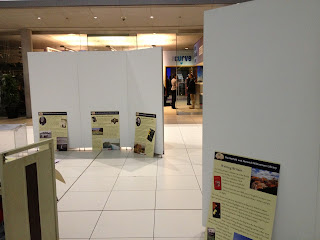 working out what goes where! 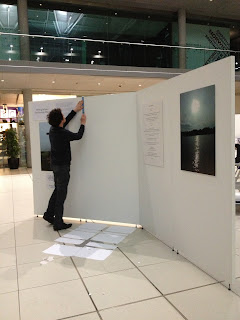 After a calm weekend, including seeing The Go-Between on the big screen, thanks to a local cinema who'd got involved in the project, Monday 11th rolled round and it was launch day.

We started with a talk from one of the British Library curators. Tanya talked us through the London exhibition and how they picked the themes and items for this and then let us into a few secrets from the Library - some of which reassured us after our experiences!

Then last night was the 'gala' launch.

The eight young people from the creative writing project were the star turn and after a little socialising and some welcoming words they all got up in front of about 100 people and read their own works. There were poems, stories and ghostly tales from some incredibly talented young people and all of us who've worked with this team were so proud.

The 8 have also documented their project and presented the library with a new scrap book to add to our collection. Who knows perhaps in 100 years time this will inspire a new project and inspire a new generations?

The winners of our photographic competition were also recognised last night as two of he judges presented them with their prizes. 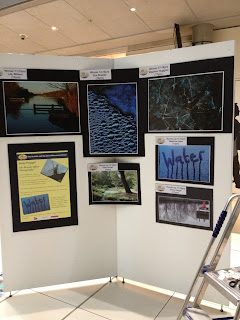 The evening finished with people having the chance to look around the exhibition and to talk to all involved in the project.

We have a week of events to run surrounding the exhibition all of which are just as exciting but documenting the project after such a great day yesterday seems important.

We have so many people to thank for the project that should I list them here I'd be in danger of sounding like a gushing actress at the OSCARs but I do have to thank my dad who did all of the design for our exhibition boards, invitations and fliers. I think you'll agree he did a great job: 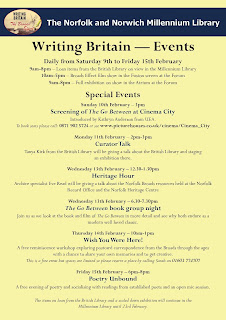 I've learnt a lot about the heritage and influence of Norfolk's unique landscape over the last few months, discovered a lot of new authors that I'd probably never have read and also discovered a love of John Betjeman's poems.

For me I think that the Broads will continue to inspire me as a photographer mostly but I now have a list of new authors as long as my arm to try and many items from our own heritage collection that I'd love to look at in more detail. 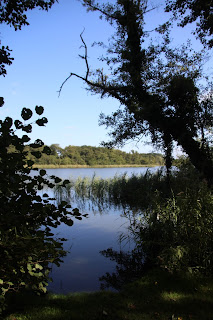