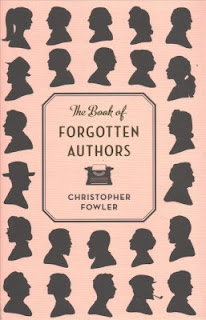 I've always been a great believer in the idea that if you are surprising someone with a gift then it should be something you'd like to receive yourself.

After a friend was talking about her reading block at the end of last year, and knowing her quirky tastes, I decided to surprise her with a copy of The Forgotten Authors by Christopher Fowler. When it arrived I had a look through it and instantly wanted to keep it and not pass it on.

Reading slumps are a real pain, that longing to read something but not being able to find a suitable book can drive you mad. Even with my limited reading stamina at present I still find this a problem - if you've got limited ability to read it has to be a good book after all!

This book includes details of 99  authors who were once popular but have slipped from collective memory overtime plus some extra essays about things like translation and pulp fiction.  I consider myself a prolific and knowledgeable reader but I only recognised 16 of the writers included...

The sections that the book is split into are clever and humorous - being a perverse person my favourite was "The Justly Forgotten Authors" - why do they deserve this epithet? My reservation for this book just came in at the library and I am looking forward to the essays and the new authors to discover. I'm sure that my list of books to read is going to grow hugely!
Posted by Sarah at 12:11 pm No comments: 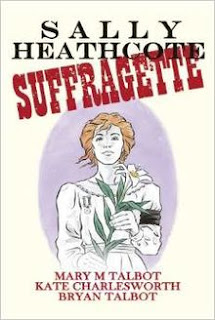 
This year marks the 100th anniversary of (a limited number of) women being given the vote and while my book of the year last year was the wonderful Things A Bright Girl Can Do about the suffrage campaign I wanted to read more.

Around the February anniversary there were a lot of new non fiction books about the suffragettes and I have added them to my reading list to investigate when my reading stamina is improved, but in a lot of recommended lists I saw mention of Sally Heathcote: Suffragette. On looking the book up I found it was a graphic novel (a genre I always intend to read more of) and so reserved it from the library in the hope that my brain would cope with the format.

It took a while for it to be my turn to borrow the book (hurrah - it is popular!) and this did mean I am further along in recovery and after a few pages struggling with the different format I was drawn in.

Sally is a fictional character but is obviously based on detailed research into the suffrage campaign, and we follow her contacts with the movement from its early days in Manchester, through the split between the militant and peaceful branches, on to the real violence of the years before the First World War and then the war itself and the culmination of the campaign.

This little splashes of colour, especially for Sally's hair, help to keep the story straight in all of the scenes and I did become involved in her story, the little flash forwards were especially effective. I also very much liked how the tale did poke holes in the mythology that surrounds the Pankhursts, they were a complicated family and this is highlighted in the book.  I've always been uncomfortable with Emmeline and Christabel's total volte face on the outbreak of war and this is reflected very well here.

To make the narrative work Sally is obviously repeatedly in the right place at the right time which does sometimes seem a little improbable but it is the only way the authors/illustrator can give a complete overview of the movement, the book definitely follows the 'show not tell' school of story telling.

Without spoilers the last few pages of the story pack a real punch.

Overall I enjoyed this book, but I think that it should be taken as a version of the history of the Suffragettes and read in conjunction with other books on the subject. It is also not clear from a quick glance at the book that Sally is an amalgamation of characters and the book fiction not biography.
Posted by Sarah at 2:00 pm No comments: 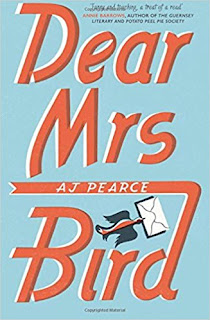 This was a book I read quite a while ago, before I fell ill in fact, but I was looking back through my list of books read and realised I'd never talked about it.

This was a book that at first I didn't think I was going to enjoy, it seemed so light, and to a great extent predictable but I persevered and found that my first opinions were deceptive.

Emmeline is a typical literary WW2 heroine in many ways, she comes from a privileged background but is 'slumming it' in London. She is doing her bit for the war effort as she is a phone dispatcher for the Auxiliary Fire Service just as the Blitz is increasing in intensity.  Her dream it to be a war correspondent and she is overjoyed to get a job with the London Evening Chronicle, it isn't quite her dream job however - she ends up being part of the agony aunt team for one of the other publications from the Chronicle's stable.

It is at this point that the book becomes both the most predictable and the most unpredictable and I got fully swept up into the lives of the protagonists and by the end I'd cried more than once!

This is a book very much in the vein of Their Finest by Lissa Evans - mostly fun, frothy and light but with the occasional emotional wallop. It takes familiar events of the war and weaves them into the narrative in a way that is believable as well as being just one coincidence too far.

This review doesn't seem as positive as the feeling the book left me with last autumn which seems slightly unfair - so many of the details of the book, and the emotional impact it had on me are very strong and sometime you do just want a little bit of light-hearted reading.  That I can still recall so much of the book is also a point in its favour - there are some books I read at the end of November last year that I can't recall at all...
Posted by Sarah at 2:44 pm No comments: