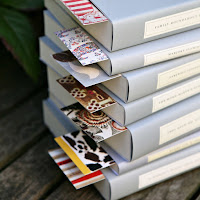 
I love the books produced by the Persephone Press, at first glance they may seem to be dull and all the same but once you open the tactile grey covers you are greeted with amazing end papers (often reproduced fabrics relevant to the author or book) and bespoke bookmarks for each volume.

I have a full bookshelf dedicated to books from Persephone, as well as piles of volumes that don't fit on these shelves.

The last book I bought in a physical UK bookshop before lockdown was a Persephone book (Expiation by Elizabeth von Armin) and some idle internet browsing meant that a parcel from Persephone was my treat to myself for July.

The books cover all genres and have introduced me to less well known books by favourite authors or books written for adults by primarily children's authors. Some of my favourite volumes are the short story collections from Mollie Panter-Downes and the novels from R C Sheriff (author of one my favourite plays).

I think the thing I like the most about Persephone is that their catalogue and website tells you so much about a book (without giving the entire story away) that when you pick a book you generally know you are going to love it  - as the books aren't the cheapest this is a great thing!

Before Coronavirus I regularly visited second hand bookshops and stalls and only twice in about 10 years have I come across a Persephone title on a shelf - either no one give them away or they are snatched off the shelves as soon as they appear!

If I've made you curious then do investigate their website (I'm not affiliated to them in anyway I just love the books...) now if you'll excuse me I'm off to read another couple of  short stories from Syliva Townsend Warner which came in my parcel the other day!
Posted by Sarah at 2:56 pm No comments:


Originally due to be published in April I've had an advance copy of this book sitting on my Kindle for many months and it has been burning a hole in my curiosity too! I put off reading it for two reasons. Firstly book one was *so* good I was nervous about the sequel  - could it be as good?

The second reason was more personal, half of the joy from book one was reading it along side my family and the heated texts and messages we shared as we read the book. What with the pandemic we've not been able to really get together much this year and so I wanted the closeness that shared reading brings!

When the copy for Kentishbookboy arrived it just so happened that it was one of the weeks his year group was at school but I'm afraid to say neither his mum nor I could wait any longer and we spent every spare moment over two days reading and messaging.

After the climactic and traumatic ending of the first book we were plunged straight back in to Pip's world and like the first book there were moments of tenderness, fear, and excitement as the adventures across France continued. There were so many historical points covered and coupled with the realistic show of emotions and actions that warfare causes I often forgot that the cast were a mix of animals rather than a group of disparate human resistance fighters!

Being an adult and knowing how the real history of 1944 played out in France meant I was pretty sure how the adventure was going to end but the journey there, through the eyes of a band of animals, was gripping and at times downright scary! And the epilogue was (implausibly) perfect for me - a real pleasure to know that this was a complete story and there wouldn't be dozens of further sequels each becoming more far fetched.

Personally I think that the two Umbrella Mouse books deserve to become as popular as War Horse, The Boy in the Striped Pyjamas & Good Night Mr Tom in the way they introduce so many different aspects of war to young readers.

I'm looking forward to hearing what Kentishbookboy and his nan & grandad think when they read the book - hopefully it won't be too long before we can all get together and have a proper book group chat in person.

Subtitled A History of Feminism in 11 Fights I found this book to be fascinating. Lewis manages to tell the story of feminism via the stories of11 important women but rather than just talking about their feminist credentials, and why they deserve to be remembered, she also fills in the shadows of these same women.
She reminds us that very few people are all good and that even those that are remembered and presented as pioneers have another side, and are rounded, often difficult people.
This is a clever book because it utterly champions pioneers of women's rights and women's causes but it does this with humour and reminds us that we have to take all of history not just the bits that appeal to us.
Posted by Sarah at 3:08 pm No comments:

One More Croissant for the Road by Felicity Cloake

Despite having over flowing bookshelves and a Kindle full of unread books I still found myself with nothing to read a few weeks ago and so started to browse the Library ebook shelves again. I think that the impossibility of travel and the boredom that is meal planning drew me to this book.
Cloake sets off by bike to spend a few weeks cycling around France trying the various local specialties of the regions and also trying to find the best croissant in France.
I don't hugely enjoy cycling, and there are certain foods even I'd never try (andouille sausage I'm looking at you here) but Cloake's enthusiasm is infectious and I now have a list of places as long as my arm that I'd like to visit.
I also liked that often Cloake gets fed up with the weather, camping and cycling and so checks into hotels and uses trains to get from place to place. This made 90% of her trip sound fun rather than a punishment. For me this was ideal lockdown escapism and encouraged me to open some of my recipe books and try some new dishes.
Posted by Sarah at 2:57 pm No comments:

This is a whimsical tale of one man and his cat, mostly told from the viewpoint of the incredibly intelligent cat, Nana.
It sounds trite but I was swept away by the writing and the descriptions of Japan through the seasons and by the end was an emotional wreck. This book was a master class in showing how to write/translate a book that appears simple but is in fact profound and deeply moving.
Posted by Sarah at 11:28 am No comments:

The Cat and the City by Nick Bradley

Cats in Japanese fiction do seem to be a thing and during lockdown I have read two of the genre. This book is written by an Englishman (with Norfolk connections) who lived in Japan for a decade.
The book is effectively a series of short stories all connected by the ways that one cat pops in and out of their lives however obliquely. This device allows the reader to learn about many different areas of Tokyo and also just a little about the culture and structure of Japanese society.
I found it a great read for escaping during the worst of the (initial?) lockdown but came back to reality with a thump at the end of the book as world events even intruded on a book written and published before the pandemic.
Posted by Sarah at 11:16 am No comments: