Travel guide with a difference 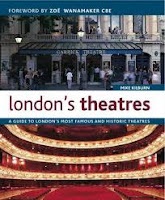 It can't have escaped readers' attention that I have been to the theatre quite a lot during 2011. It has been wonderful and I have more trips already planned for before Christmas.

I think that my colleagues think I am slightly insane for spending so much time traveling to and from London but one was very quick to point out the arrival of a new book to the library, and even went and found it on the library shelves for me.

The book is wonderful, it is a guide to the 52 central London theatres, it has lovely pictures, tells you of their history and all manner of quirky facts about them. Even though I've been to the theatre so much lately I've still only seen shows in 10 of them - bank balance look out there are another 45 to visit!
Posted by Sarah at 11:32 am No comments: 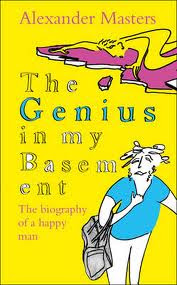 The Genius in my Basement by Alexander Masters

Back when I was reading all of the World Book Night books I discovered, and was blown away by, Stuart: A Life Backwards by Masters. A couple of months ago, when reading through publisher catalogues I saw that he had a new book coming, it instantly went on reserve in the library.

The book arrived and I duly put aside everything else I was already reading to start this one. It wasn't the joyous read I was expecting.

Again Masters has written a biography about a person who isn't a typical subject for a book. Simon Norton was Masters' landlord and a friendship grew up between them:

One of the greatest mathematical prodigies of the twentieth century stomps around the basement in semi-darkness, dodging between stalagmites of bus timetables and engorged plastic bags. He eats tinned kippers stirred into packets of Bombay Mix. Simon is exploring a theoretical puzzle so complex and critical to our understanding of the universe that it is known as the Monster. It looks like a sudoku table - except a sudoku table has nine columns of numbers.

I'm not totally put off reading Masters' next book - if he writes one - but I won't be looking forward to it with such excitement. That makes me sad because I really did find Stuart a gem.
Posted by Sarah at 11:11 am No comments: 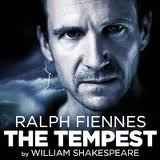 This is the third of four plays that Sir Trevor Nunn is staging at the Haymarket Theatre in 2011 and due to the star one of the hottest ticket around. Thanks to the eagle eyes of a friend we've had seats booked at this for months.

In the end we found it a very mixed performance.

Ralph Fiennes, as Prospero, is amazing. He has such stage presence that even when he is just standing behind a pillar watching the scene unfold I found my eyes drawn to him.

Nicholas Lyndhurst and Clive Wood were also outstanding as Trinculo and Stephano. These are the two comedy roles and they play the roles wonderfully and have a real chemistry together, which continues with the addition of Caliban. It isn't their fault that perhaps Shakespeare wrote one too many slapstick scene.

The other part of the production that really stood out for me was the portrayal of Ariel and the other supernatural creatures. They flew, danced, sand and moved in such a smooth, beautiful way that I really could see them as ethereal creatures rather than actors.

However the rest of the play didn't captivate me in such a way, it felt too episodic. The stories didn't quite make me believe in them and in the final scene where everyone is reunited and wrongs are put right no one on the stage seemed shocked or bothered - there, for me, was no emotion in this bit.

All in all a mixed bag, it certainly wasn't a bad play, I thoroughly enjoyed watching it but I think I prefer my Shakespeare at The Globe where there is more interplay between the stage and the audience (like it would have been when the plays were first performed), and where the actors seem to inhabit the roles rather than declaiming the lines to a dark theatre.

Caliban, Trinculo and Stephano.
Posted by Sarah at 7:46 am 2 comments: 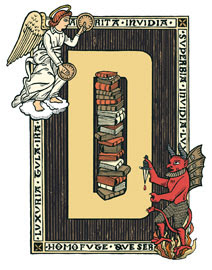 After having such a good time on two previous occasions I had a look on the website to see if there was anything playing on days that Mr Bookworm and I were both free.

It was with great delight that I found a performance of Doctor Faustus that we could both attend. Mr Bookworm read it earlier in the year and proclaimed it 'more readable' than Shakespeare and I've always been fascinated by the idea of actually being able to sell your soul to the devil.

The day didn't start well, there was torrential rain falling in Norwich as we left, but by the time we reached Bankside the weather had more or less cleared. It being a Sunday we decided to treat ourselves and had brunch at The Swan at the Globe. Our table was possibly the best in the house being tucked into a corner window overlooking the Thames and St Paul's Cathedral. The food and drink were lovely too.

The weather appeared to change as we sauntered across to the theatre and it started to rain, our seats were right up at the top of the theatre but the view was wonderful and it was lovely to people watch as the theatre filled up. The rain stopped just as the actors appeared on stage and by the end the weather was gloriously sunny.

As ever it took me a little while to adjust to watching a play in full daylight but I was quickly immersed in the story and totally drawn in to the story of a man who literally will do anything to learn the secrets of the world and then once he has the power squanders it.

The acting and the staging were wonderful, I've only just started watching Doctor Who* and to be honest Arthur Darvill's character hasn't really made and impression on me - however he was great in Doctor Faustus. I loved the ensemble cast all taking more than one role (excepting the two leads) and the costumes made you think that there were 3 times as many actors than there actually were. I thought it was a great touch having the angel and the demon played by sword wielding females. And as for the dragons...

All in all another great play in a lovely theatre. I'm not going to get to see anything else there this season but already I can't wait for next year's to be announced. 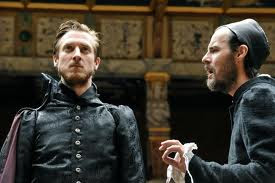 *This is where I confess that despite what I said here I have become a convert to Doctor Who. Damn, 30+ years of resisting down the drain.
Posted by Sarah at 10:45 am No comments:

As if I didn't already have enough to read, I've discovered a new source of reading material.

There was a small article in The Bookseller a couple of weeks ago announcing that Faber books were going to use a company called Net Galley to distribute their proofs. This is a service that provides the proofs in electronic form to those in the book trade, libraries and bloggers.

After having a look at the site I signed up and already I have two books to read - better still some of the books can be delivered straight to my Kindle. I'm reading a (so far) intelligent chicklit book for young adults and a graphic novel set in the 2nd World War.

I'll keep you posted.
Posted by Sarah at 1:00 pm No comments: 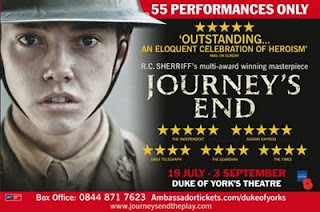 Literature about the First and Second World Wars has long been a favourite genre of mine. When I heard that the R C Sherriff's play was returning to London this summer I spent days planning how I was going to find the time to go and see the play.

I managed it on the last day of the run thanks to LastMinute.com and some rota juggling. I am so glad that I did, and if the tour was coming anywhere near Norwich I think I'd be there every night of the run.

I was a little worried when I got to the theatre as I was seated in Row AA - right in front of the stage. In fact as I am so short the stage was above my head. It didn't matter as the whole play actually takes place in a WW1 dugout and is supposed to be underground.

The staging and the lighting were minimal, the stage appeared to be lit totally by candle light and it was a static set with all of the acting taking place around a wooden table. The play takes place over just a few days just before the last major German offensive of the war.

The play was written by R C Sherriff in 1929, a man who had served in the trenches. It conveys the tedium, the fear and the excitement experienced by soldiers and at times is incredibly funny, however by the interval I knew I was going to need tissues.

By the end I was in floods of tears, as was the majority of the audience. I don't think I've had a more intense experience at the cinema or theatre before. The play ends with the attack. The stage goes black and the theatre is just full of the sound of guns. That fades and then the Last Post rings out.

I'm welling up just thinking about it.