Blogging about something like Genocide is virtually impossible, but at the same time Holocaust Memorial Day should not go unmentioned.

January 27th has been picked as HMD for it marks the day that the Red Army liberated Auschwitz, and 2010 marks the 65th anniversary of this action. Sadly this act didn't see the end to genocide and countless millions have died since.

There are many books, fact and fiction written about the Jewish Holocaust. Many have been written for children, in fact I studied many of them in the course of writing the dissertation for my M.A. Not all of them are good but the important thing is that they are there. Hopefully if such actions aren't brushed under the carpet they will occur less and less. What we must not do is pretend such things never happen. 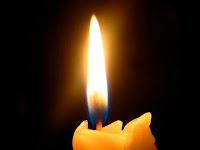 January 26th (which it already is there!) is Australia Day and so time to celebrate the wonderful writing that comes from Down Under.

As a child I was lucky enough to be sent lots of books from Australia by relatives living their. The Muddle Headed Wombat was a great favourite, to the extent that when my sister and I left home we fought over our copy and had to have another one sent to us to stop the bloodshed! Then there was Shy the Platypus, Cuddlepot and Sugglepie and We of the Never-Never. As we got older classics by Mary Grant Bruce and Ethel Turner arrived. I've reread and cried over Seven Little Australians many times!

However if I could only keep one book Australia it would have to be: 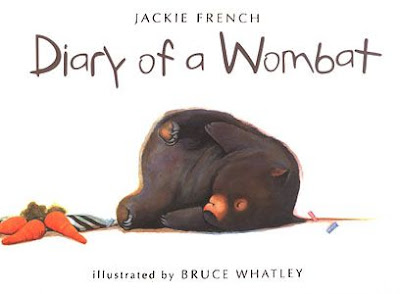 This is not only the one Australian book I would save but also the one picture book. I can only try to explain how much I love this book.

Part of it is to do with where I first came across it.
In the autumn of 2005 I went to Australia and spent some time travelling with my sister, one of the first places she took me was the fabulous children's department in Dymocks bookstore in the centre of Sydney. This book was new then and had a lovely display. We then went to Taronga Zoo and I got to come face to face with a wombat. It was love at first sight.

The other reason I love the book is how it is written, the words are good but without the pictures it would be quite dull, it really is a visual delight.

The best bit? A sequel has just come out...

... oh and my parents arrive in Australia in a couple of weeks and have promised to bring me a copy home!
Posted by Sarah at 11:45 am No comments:

It is the season of the book prize again.

I am mostly interested in prizes which are aimed at or include children's books although I do enjoy seeing all of the lists.

The Costa Book Award category finalists have been announced and the overall winner will be announced on January 26th. The children's category winner is a strong contender this year and although I haven't read the book a lot of people I respect have read and loved it. Sam at Books, Time and Silence has a fabulous review, and I will be taking Ness's books on my next holiday.

The leading American children's book awards are due very soon but for me these aren't the awards I am most interested in.

The Waterstone's Children's Book Prize shortlist was announced today. From 2006 to 2009 I was really closely involved with this prize and I was privileged enough to read the long list for 2010. I've been waiting with baited breath for this shortlist and I haven't been disappointed at all.

The nine books making the shortlist are incredible:

3. The Girl Who Could Fly by Victoria Forester

6. The Toymaker by Jeremy de Quidt

9. The Crowfield Curse by Pat Walsh

Of the nine books I only disliked one and one made my top 5 books of 2009. My favourite five books from the long list all made this shortlist.

Picking the winner is tough though. Flyaway was an incredible book - it didn't suffer at all from second book syndrome and was just as powerful at Stolen. Superhuman: Meteorite Strike is written by someone originally from Norfolk and so that has a soft spot in the Norfolkbookworm's heart and then the Great Hamster Massacre is a truly great book for newly independent readers and these never seem to win awards.

I could go on and justify why 8 of the 9 should win but I am going to be loyal to Love, Aubrey it was one of my top reads from 2009 after all and even on the third re-read it moved me just as much as the first time.

Now all I have to do is wait until February 10th for the winner to be announced.

I had planned on writing about all of the exciting books I've already read this year - being snowbound has worked wonders on that lost mojo - but the excitement of the award season means that post is on hold for a few days.
Posted by Sarah at 10:42 am No comments: