This trip came about almost by accident. My normal theatre going companions and I saw a poster for this on one of our other trips to London and all of us instantly said "I love that film". To think is to act and we quickly booked tickets to the first matinee that all three of us could make.

Using Lastminute.com our seats were allocated on arrival and while we were quite high up in the theatre we had centre seats and a fabulous view - well once the vertigo had vanished the view was good!

This is a cleverly staged play. As we took our seats the stage was dominated by a large staircase in the middle with assorted items of furniture dotted about, and as the play continues this remains the only staging. However all of these items are on runners and move in and out of the centre stage as the scenes change. Small props are used and it is up to the actors to move them on and off set as needed - it is a very stark play in this way.

The 'car' is a park bench and two dining chairs all set on a revolving part of the stage and as movement is needed for the plot the stage moves and a projection plays in the background. Writing it down makes it sound a little tacky but in fact it worked splendidly as a visual effect - even from the height we were sitting.
The use of projection throughout the play also highlighted the passage of time and managed to give the impression that there was a larger cast.

There are only three actors in the whole play - Vanessa Redgrave, James Earl Jones and Boyd Gaines and all three were superb the day we saw them. It took just a little while for me to get my ear attuned to the deep south accent but very quickly I was swept away and found myself totally immersed into the story, and by the end totally moved.

The play is set in the deep south of America from the late 1940s through until the 1970s and at times the racism and the language used made me uncomfortable but obviously was totally in keeping with the setting. I don't remember it being quite so overt in the film but it has been well over a decade since I last saw the film so this may just be a false memory.

It was a lovely day out and I am very pleased that I got to see this play during the limited London run. It won many awards in New York and I hope that it wins something at the London theatre awards.
Posted by Sarah at 8:05 pm No comments: 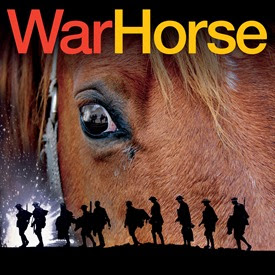 This is a play that has been on my 'to see' list for a long time but as the booking period stretched through until 2013 it wasn't one I wanted to see urgently. However once the film version was announced I knew that I wanted to see the stage show before the film.

I've long been a fan of Michael Morpurgo and I've read the novel War Horse several times but I was still a little nervous about seeing the show - after all I'm renowned for sitting there going "it didn't happen like that in the book!"

I needn't have worried from the first instant that actors appeared on the stage I was captivated, everyone raves about the model horses but it is true - after a couple of seconds you really do forget that they are puppets, it really is just like live horses are on the stage. I'm not a great horse lover - the ones I've know have either tried to bite me or have trodden on me but Joey and Topthorn could easily win me over to being a fan. It was the goose that repeatedly stole the show however...

The story has been altered from the book but for me it worked totally and to include everything from the book would have given the play an impossibly long run time. Like Black Beauty the original book is told from the horse's view point and to try and do this on stage would have diminished the power of the play.

I can't put in to words how I feel about this play because it was so totally absorbing and moving. It is incredible that the brutality and horror of war can be so comprehensively portrayed without any violence or fake blood being used. I wonder if playing on the very British love of animals to depict the war is one way to bring the horror home?

I laughed and cried throughout the play and if it had been possible I think I would have stayed in my seat and watched it again straight away.

I'm looking forward to the film but I will be going to see this play again - as soon as I can manage. 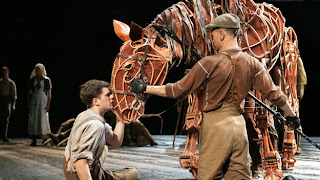 One of the first books I remember buying for myself was The Little House on the Prairie by Laura Ingalls Wilder - all about the story of an American pioneer family moving West towards the end of the 1800s as America itself spread west.
I devoured the whole series of these books and later as an adult read biographies and critical responses to the books and despite now being able to see their faults, racist attitudes and hidden messages, I still love them and the whole idea of the growth of the Wild West.

As I may have mentioned (!) we've just come back from the west of America and one of the things that still surprises me is how new the area is in terms of being a place where westerner live. We went to towns that were younger than my grandparents and even the state of Arizona is 100 until next year.

In a lot of the gift and book shops we visited this book kept catching my eye, and on getting home I did treat myself to a copy and it was a lovely, if a bit disjointed, social history of the working women who helped open the west of America for white migrants.

Harvey was strongly connected to the railroads and as they expanded west he made sure that he built hotels and restaurants along the lines so that where ever the trains stopped people could get consistently good food and lodging. As well as employing local people he took advantage of the growing freedom of women, and economic need, and employed women from all over the country. As well as their wages they got full bed and board and often became some of the best wage earners in their families.

The Harvey hotels are mostly gone now but the legacy lives on as his family still run some of the gift shops at some of the west's National Parks - only fitting as it was Harvey that opened the areas up to the public but building hotels and extending railway lines to encompass them!

This book is a mixture of Harvey's history, the railroad history and the personal history of the Harvey Girls and is a fascinating read if, like me, these things interest you. It is pretty niche to be honest but still fascinating and a reminder that in some places history is far more recent than in the UK! 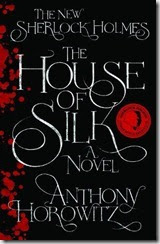 House of Silk by Anthony Horowitz

I've mentioned before how I keep getting my hopes up when reading sequels to much loved books, and how they keep getting dashed. That notwithstanding I still keep doing it on the grounds that at least once it will have to be a success.

The House of Silk is for me that success story - hurrah.

I approached the book cautiously, for me, took my time reading it and I wasn't disappointed. I couldn't find any anachronisms and the writing style felt natural, unforced and not at all like a pastiche. Conan Doyle probably wouldn't have written about such a topic but the way Horowitz did was sensitive, discreet and just how it could have been written at the turn of the last century.

I thought I was going to have historical fact issues with the book when Horowitz mentioned Arizona in the 1880s/1890s. Having just come back from there and finding that Arizona only became a state in 1912 I thought he'd made a mistake, however he did just say 'Arizona' not the 'State of Arizona' and the name was in use before 1912. Once I realised that I felt more comfortable and nothing else jumped out.

I think the book is being received positively, the reviewers mostly seem to have enjoyed the book and I certainly felt that it slotted in well with the originals - however I am a latecomer to Sherlock Holmes, if I'd been a fan for years (like I have been with some of the other sequels/prequels) I do wonder if I'd feel the same.

It doesn't matter I enjoyed the book, I will re-read it and I am quite happy to shelve it alongside the originals and not give it straight to charity in disappointment!
Posted by Sarah at 8:12 am No comments:

This week was one of the best I've had at work for a while. The Forum (pictured, and where the library is situated) turned 10 this week.

In 1994 a catastrophic fire destroyed Norwich City Library, lots of books and historical documents. The BBC has a great piece here about the fire. 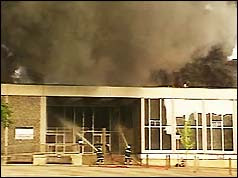 Out of the ashes came the wonderful building we now have, this opened to the public in November 2001 and was officially opened in June 2002 by the Queen. I can't believe that it has been ten years time does fly.

We've had lots of activities planned to celebrate the birthday - story time sessions with Maisy Mouse making a guest appearance, a quiz, author event, a huge 'create the birthday bunting' competition and of course a birthday party complete with cake:

What made the day even more special was the release of this story by the Chartered Institute of Public Finance and Accountancy stating that for the 5th year running the Norfolk and Norwich Millennium Library is the busiest in the country.

Wow - for half of the library's current incarnation we have been the busiest in the country.

In fact the statistics get better for not only is the city the busiest library but Norfolk is also the busiest Shire County when it comes to Library use.

We are very proud - there are lots of jokes about Norfolk, few of them flattering, but we are obviously doing something right in this time where there only seems to be bad press for libraries.

Now comes the hard work - keeping the standards this high for the next 10 years!
Posted by Sarah at 8:23 am No comments: