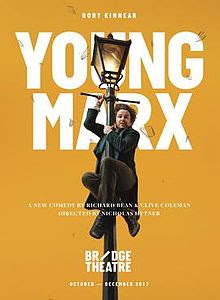 
After a busy week away for me, and a nightmare journey for Rebecca, we were both hoping for a huge amount from Young Marx. We'd also convinced Mr. Norfolkbookworm that this was going to be good and worth a trip to London...

The Bridge Theatre is brand new and it felt lovely walking through the doors on a cold and wet November afternoon. It was bright, warm and spacious with friendly staff.

Due to booking at different times we weren't all sat together, Rebecca and I were in the side of the gallery and Mr. Bookworm was in the back row of the same gallery, square on to the stage.  The side seats were very clever as they were angled to face the stage - no awkward leaning needed.  Our seats did seem a little hemmed in as there was a low black ceiling almost in our eye line - it looked like a plane's bulkhead - but once the play started we didn't notice it at all.  Mr. Bookworm said he found the sound muffled from his seats but as he has some hearing problems (and we didn't test the seats) we can't say if that was him or the acoustics.

Now for the play, well for me it was just the tonic I needed. It explained a lot of Marx and Engels' ideas in a way that I finally understood but it had me smiling and laughing from the very beginning. At times it bordered on descending in to farce, which would have snapped me out of the mood, but it always stayed just the right side of that comedy line.

The play was full of killer lines, which I am still chuckling over. I also loved the scene in the library, some might think that it is over the top and could never happen in such and august place but I know better.  The character sketches of patrons behaviour was spot on throughout, the end of this scene did have me doing a double take and wondering if the interval gin and tonic had gone to my head more than I anticipated!

There was some darkness to the play, and it did have some pertinent points to make but they weren't rammed home and I just thoroughly enjoyed this lighthearted comedy and can't wait to make a return visit to the theatre.
Posted by Sarah at 12:41 pm No comments: 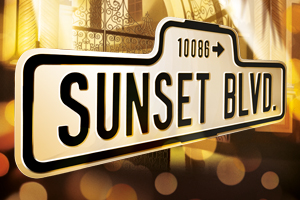 
During some recent time in Birmingham (more on this soon) I discovered that the new touring version of Sunset Boulevard was playing during my stay. I was most surprised that there were good, cheap, seats still available so it seemed fate that I should go!

I knew a couple of the songs from this show but I had no real idea what it was about - as seems to be the way when I go to the theatre at present.  This was a lavish affair with a huge cast, live orchestra and a lavish set. In fact the set could almost be called fussy, it needed changing so often that I'm sure a lot of the run time of the show was due to scene changes!

The show itself took a long time to grow on me, by the interval I admired the voices but wasn't fully involved with the story at all, however the second half was better. The sub plots were far more interesting to me in all honestly and some of the reveals really did move me.  Oh and the ending itself - I didn't expect that!

Now for the confession - I was so convinced by the projections used as back drop I assumed that Norma Desmond was a real person and that this was a biopic, I think Mr Norfolkbookworm has stopped laughing at me now...!

I have now watched the film that the show is based on and I'm glad that I saw it afterwards, it is darker and some of the reveals are shown earlier. You like the main two characters even less in the film too, where as the musical did give them some warmth. I was struck with how much dialogue in the show came directly from the film too.  My advice - if you are planning on seeing this and haven't seen the film then see the show first; if you've seen the film then the show doesn't really add anything to the story (but has some amazing singing). Always nice to see a new show, in a new theatre but this one won't be making my top of the year lists.
Posted by Sarah at 12:16 pm No comments: 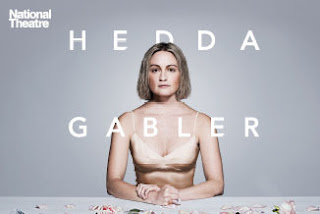 
I'd missed this in London at the National Theatre and so was very happy to find out that the tour was coming to Norwich but even after all of this time I still went in 'blind' to the play as I didn't know the story at all.

I think that this was a great way to see the play as it kept me on the edge of my seat as I couldn't work out how the plot was going to play out at all.
I could sense that it wasn't going to be a happy play, and the focus of the guns at the start made me think of Chekhov's rule. This roughly states that if there is a gun shown in act one it has to be used by the end of the play...

While all of the cast were very good, none of their characters were and the slow growing air of menace and madness really drew me in and left me with shivers running up and down my spine. There were moments of levity (and sometimes I seemed to find things funny when others didn't - oops?) but this was an oppressively dark play, despite the light set!

This version was an adaptation by Patrick Marber and as I'm not familiar with the original I don't know how purists see it, I will be hunting down an earlier version to compare very soon. This is only the 2nd Ibsen play I've seen - the first Emperor and Galilean back in 2011 put me off a little but I think that I will be trying more in the future.
Posted by Sarah at 6:02 pm No comments: 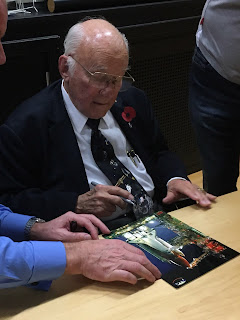 
Apologies for the lack of detail in this write up - the event was as excellent as usual, with an incredible guest, but it fell in the middle of an incredibly busy couple of weeks for me and already the details are hazy.

While my memory is shot to pieces the same cannot be said of McCandless as his hour long lecture was interesting - and like so many events lately covered all sorts of topics, including quidditch!

From my point of view I was a little sad that there wasn't more of McCandless's memories and personal history - this is the area that I am most interested in - but I quickly became enthralled with his detailed analyses of why we need to keep exploring and the pros and cons of manned missions v. robotic missions.  At a time when I'd just finished Scott Kelly's autobiography which definitely talked about the downsides of space travel this seemed very apposite!

More detailed write ups of this event can be found if you read back through @Space_Lectures tweets and also on Collect Space. The talk, and the chance to briefly meet McCandless were brilliant and the deficiencies here are all mine.  Perhaps I was just overcome by winning in the raffle this time and then getting a wonderful piece of art signed (as shown in the image!)

I can't wait for the next event in March!
Posted by Sarah at 5:46 pm No comments:

October Reading Round Up 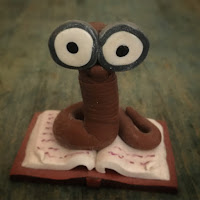 I didn't think that I'd read that much in October but when I counted up it was a respectable 20 books again.

There was a lot of non fiction in this mix, and a lot to do with farming in Norfolk during, and just after, World War One all ready for a project next year.

My three top reads for the month in no particular order are:

No surprises that a space book features in a top read, and having met Scott Kelly last year I was looking forward to this book a lot. Kelly is wonderfully open about his experiences, good and bad, and also pretty indiscreet with some of his memories which made this a fun read. My only (slight) niggle with the book is that it opens with an account of the health issues Kelly experienced following his year in space but he doesn't really come back to this and I would like to have learned a little more about the long term effects, especially as he did touch in this at the talk last year. 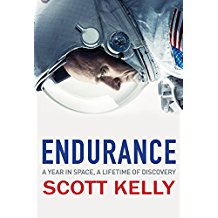 On the Bright Side by Hendrik Groen

I was so excited when an email from Net Galley dropped into my inbox offering me the chance to read this second book from Hendrik Groen and although it isn't actually published until January 2018 I think it may well be one of my top books of 2017, just as the first book was last year. Hendrik is back and he's as grumpy as ever despite mellowing in other ways.  This book has real depth and a powerful emotional punch. I just hope I am as brave and bold when I am 84! 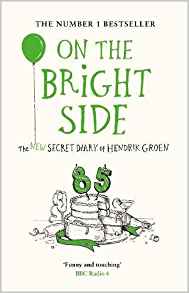 Ask an Astronaut by Tim Peake

Oops another astronaut biography in my top reads. I was sceptical about this book when I heard it being announced, it seemed a little but like Peake was milking his fame for a book that wouldn't be very personal at all. However he was very clever and instead of it just being a book full questions about space sent in via Twitter Peake has produced a simple autobiography of his astronaut career using the questions provided by the public as the starting off point. The book can be read by his young fans but has enough technical detail to make it a great addition to my space shelf. 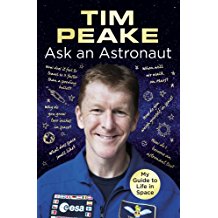 Apologies for the lateness of this October post - computer problems delayed publication.
Posted by Sarah at 4:30 pm No comments: