This was very much a group outing with Mr Norfolkbookworm joining me and two of my theatre going friends. Despite the best efforts of the weather and the trains on all of our travel we made it in time, scaled lots of stairs to the circle of the Olivier and found our seats in plenty of time for 'curtain up.'

This Lear was set in modern dress but in a non specific time and for the most part this worked for me. The costumes and set implied we were in a repressive state run by a tyrant, although this didn't quite work for me as I can't think of any modern tyrant who will voluntarily resign power.  This production skirted the issue and I got the impression that this Lear thought that he could resign all of the nasty bits of power but keep the 'fun' bits and have plenty of time to hunt and hang out with the army.

I found the story to be clearly told, and fast paced - which was good as for the first time at the National I struggled to hear an awful lot of the lines, mainly when Lear and others got excited. The lines seems rushed and mumbled, too much emotion to keep the diction clear perhaps? This did not get any better when the sound effects for the storm came into the equation.

The scene with the Fool was particularly moving and it took me a couple of seconds to see exactly what had happened and then when Gloucester loses his eyes it was truly horrific - once more the sparing use of violence and gore worked to the advantage of the play, especially as the audience couldn't quite see the act being committed.

Act One was nearly two hours long and the action picked up even more after the interval but for me didn't manage to engage with me emotionally. I don't think that it helped that many of the deaths appeared to be played for laughs, not  Lear or Cordelia, but Edmund, Goneril and Regan's certainly.

In fact on talking this through with one of my companions afterwards we think that this lack of emotional connection was one of our biggest complaints, well that and the inaudibility.
I  don't know if I was expecting too much of this production after the wonderful Othello last year but I came away feeling a bit 'meh' and I don't think that any of the cast deserved the standing ovation that some in the audience gave.

In a way I don't think that the play was that bad, but like at a book group, it is far easier to discuss something that you don't like...

One of my recent uni tasks has been to think about reviewing productions, and taking notes on a production. I tried this at King Lear and they have certainly helped me recall details on the play but I think that talking to people who also saw the same production afterwards helps me more.

The notes I took in the dark are:


* - in fact in Act Two it got stuck, I thought it had at the time but this has been confirmed by a friend and another review.
+ - surely not a good sign that all I can see is this and not one of the most important speeches of the play
^ - this started as hand behind back, became clasping and then scratching, I am guessing this is the 'tell' for madness but sadly it didn't stay consistent and was just distracting. 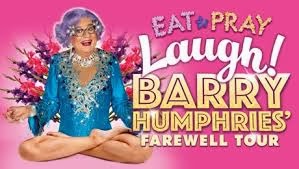 
A cold and damp February night was just the time to see this farewell tour event, although during the first half I wasn't entirely sure it was a huge mistake.

Before the interval we have an extended scene with Les Patterson, Cultural Attache, who is trying to reinvent himself as a celebrity chef and won't let a touch of Montezuma's Revenge stop him.  This skit bordered on being just too gross for me and I was alarmed that some in the audience didn't see Les's pronouncements as satire. We then met Gerald the vicar with an ASBO and leg tag who has a penchant for young men.  Lastly there was Sandy Stone a deceased elderly man looking back on the death of his daughter and the way his widow had been conned by a relative and placed in a home not suitable for looking after her.  Can you tell from my tone I didn't find this funny?

However after the interval it all changed - we started with a film expose of Dame Edna's life and then the lady herself appeared on an elephant.

Comedy that relies on picking on the audience shouldn't be funny but this was, and I was very glad to be sitting high up at the back even if that did draw some ribbing from the Dame herself.  The jokes were very place and time specific but I ended up with a stitch long before the end.

As a nice touch at the very end Barry Humphries appeared as himself and gave a little speech - and despite my misgivings from the first hour by the end I was on my feet waving a metaphorical gladdie with the rest of the audience!
Posted by Sarah at 4:12 pm No comments: 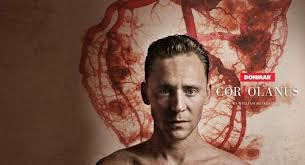 
This has been the hottest ticket in town and as soon as the cast was announced way back last summer Rebecca and I knew we really didn't stand a chance of seeing this live and so we always intended to see it in the cinema.  We've not regretted our decision as tickets have been changing hands for up to £2000 and however much we like the theatre that works out at 50 plus theatre tickets!

I went into the performance quite nervous as I know this is a bloody play but the way Josie Rourke stages it there are actually only 2 gory scenes and as ever they have so much more impact because of the restraint.

This was a modern day production staged in a very small space and while I liked some of the design choices - the wall and keeping all of the actors on stage throughout the first half where the scenes are short and entrances come quickly - I wasn't so sure about the exaggerated choreography and the walking to the edge of the stage and back again unnecessarily.

I'm not sure that I connected with any of the characters, I could see why they behaved as they did but none of them touched me emotionally and the perpetual weeping of Coriolanus' wife drove me mad.

The set design must have meant that all of the seats in the actual theatre missed some of the action and for once I felt that the camera added to the performance, at no point was I trying to look behind it to see what was going on elsewhere. Also even in the small Donmar Warehouse I think that you would have struggled to see the small emotional nuances that were integral to the play.

On the whole I'm pleased I saw this in the comfort of a Norwich cinema rather than having to queue from 4am in the hopes of getting a 'return' and I don't really regret not getting a ticket earlier in the run.
Posted by Sarah at 4:01 pm No comments:


After finishing two essays for my MA I needed some fun, light relief and NetGalley came to my rescue with the latest installment of Jack Sheffield's tales of a Yorkshire school.

These books are my real guilty pleasure and I'm happy to report that even now we are on the eighth installment of the saga the quality hasn't dropped off at all.  Headmaster Jack Sheffield is very happy in his role as headmaster of the Ragley school and all of the familiar characters appear.  Sinking into the book is like wrapping yourself in a big blanket and travelling back in time.

The 'action' covers the academic year 1984-1985, when I was 7/8. I remember some of the events talked about and love reading about this time frame from another view point.  The day of the LiveAid concert for instance was also our fete day which felt another lovely connection to the story.

As ever there is a small cliff-hanger at the end of the book, not so scary that you're worried about the outcome but just teasing enough to make me desperate for book nine already.