After a relaxed morning book browsing our way around London we came to the last play of the weekend and The Broken Heart by John Ford having decided on the spur of the moment to see this after finding 'Tis Pity She's a Whore so good in December.

This time we were seated in the Pit (yes we have now tried every area except the musician's gallery) and sadly the discomfort of the seats here nearly outweighed the brilliance of the play.  You are certainly closest to the action here, and can see every area that the performers use but you really do pay for it in comfort.

Anyhow the play...another triumph for the Playhouse. What could so easily be an over the top nonsense of a play had real heart and charm with characters that you really believed in.  At the interval Rebecca and I were trying to predict what would come next and while we knew it was a tragedy and that lots of the characters would die we didn't guess the correct ones or the correct means of death which just shows how good it was.

The cast really did work together as a group in this play, and the spectacle and shock were well handled - this might also be the least gory play I've seen at the Globe (except Farinelli) in about a year and as there was still quite a lot of blood this is saying something!

When watching plays by writers who were contemporary with or came just after Shakespeare I really do notice the difference in language and I can see why so much of his work has survived and how he has become the national poet, however I do like the work by these other writers and am so glad that we can now see them in a venue very much like where they intended their plays to be seen.

This was again a performance of a production in preview, I think it was the third or fourth performance, but again as an audience member you really wouldn't have known. It all ran smoothly and there were no noticeable line/cue/prop stumbles.

This was my last trip to the Sam Wanamaker Theatre this winter season, in fact my Globe season starts in about 6 weeks, and after being unsure of the venue this time last year I know now that I will be awaiting the winter 15/16 season.  I will also only be going if I can get certain seats in the lower gallery! I do hope that next winter there is some late Shakespeare performed here - I'd love to see A Winter's Tale or Cymbeline here.
Posted by Sarah at 11:00 am No comments: 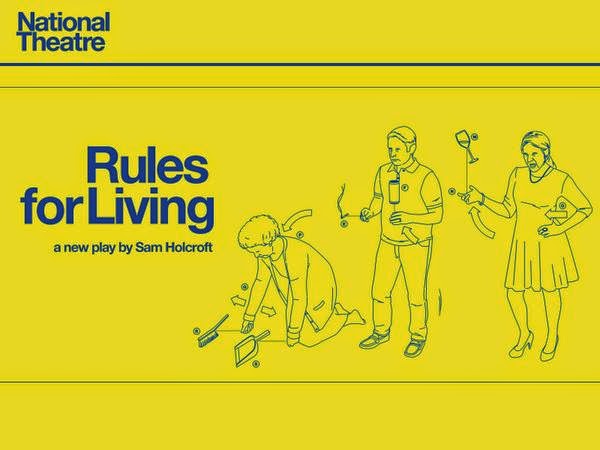 After a break of a couple of hours we were back on the South Bank to see the second play of the day in the newly refurbished Dorfman Theatre.  As this is a 'black box' theatre that can be reconfigured for any play I'm afraid that I didn't notice any changes in the actually auditorium but the foyer, cafe, cloakroom and loos were all very nice!

This play couldn't have been more different from Man and Superman if it has tried and if we hadn't known this was only the second preview I don't think I would have guessed.

The set depicts the ground floor of a large house - living room, dining area and kitchen - all set up on a basket ball court complete with electronic score board at either end.  It is Christmas Day and the family are gathering for Christmas dinner.

It is like watching a car crash in slow motion.  There are secrets in the family which slowly become clear and all of the main players have created their own 'rules for living'. As these become relevant they are flashed up on the scoreboard, this means that as the audience we saw extra humour in the characters that wasn't in the script just by their actions. One character for instance can only lie if he is sitting down and eating something, and as he is with a girl friend he doesn't love and has another secret this becomes very funny very quickly.

The car crash element is because I'm pretty sure anyone who has every had a family Christmas can recognise some of the tensions/actions in the play and seeing your life experiences in glorious Technicolour is excruciating.  Because this is so heightened not every experience is personal so there is some relief and some bits are just funny but I imagine that every audience member finds these different.

Other early reviewers have complained that they found the whole rules for living tedious and overblown but I liked this part of the play - for me it was the end that 'missed' slightly. I think I would have liked it to end just one scene earlier, but as it is a play about cognitive behavioural therapy I can see why it continues, it just would have remained a total comedy for me without it.  However as I have continued to think about this play more than the other two that I saw this weekend it must be doing something right.

In some real theatre geekiness Rebecca and I were sitting near lots of people who were taking notes on this preview performance and in fact I was sitting next to the director, Marianne Elliot.  They were all writing copious amounts so I don't know how much will change between the previews and opening night.

This was uncomfortable fun for me and while I don't think it will make my top 10 at the end of the year it was fascinating to see a new play, in a new space by a relatively new (and female) playwright.

If you are sat in the lower gallery at the front look out for flying eggs...
Posted by Sarah at 9:30 am No comments: 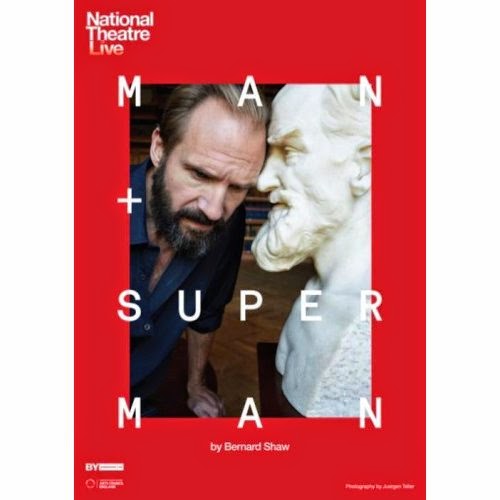 Man and Superman, The Lyttleton Theatre at the National Theatre, London. March 2015.


There has been a little gap in my theatre jaunts, partly thanks to fear of bad weather and partly because the train line between Norwich and London has been so appalling this winter, however recently Rebecca and I had one of our mammoth theatre weekends in London.  Three plays in effectively 27 hours.

First up was Man and Superman which in its own right is a bit of a big-one coming in at over three and a half hours.  Mainly it has to be said due to the author, George Bernard Shaw, who seems never to use one word if fifty will do and then to say it all twice.

That being said this was still, thanks to the cast, an enjoyable experience.  Jack Tanner, Ralph Fiennes, has been appointed an unwilling co-guardian of his friend's daughter Anne.  He is what in the early 1900s was a new man and not keen on this burden and as a radical thinks himself unsuitable for the role and for romance in general. Anne thinks him ideal for the role and also a great romantic catch.

While the acting, costumes and set were all good I did find that some of the ideas that Bernard Shaw put forward as progressive in his time now felt dated and entirely sexist. Anne is not really an independent and intelligent woman but rather a scheming manipulative one who always gets her own way.  Jack and her mother both see through her but seem unable to stop or change her and as a result I never warmed to her character and really hoped that the play would have a different outcome.

The play is so long because stuck in the middle of the action is a dream sequence where Jack Tanner morphs in to Don Juan and ends up in hell debating philosophy with the devil.  This started well and was wonderfully different from the rest of the play but just went on for too long and in the end I did lose a little of the plot and was longing for Andy Hamilton's version of the devil from Old Harry's Game to appear and put an end to it.

Oh dear - again this sounds terribly negative and this isn't quite how I feel about the play. There was a lot of humour and visually it was a treat. It was also brave to stage the whole thing and without the excellent cast this would have fallen completely flat but I do think that a little editing wouldn't have gone amiss, and I was uncomfortable with the way woman in the character of Anne was portrayed.

Rebecca had an interesting idea - the play should be restaged but with the main characters' genders switched...

This play will be broadcast live to cinemas in May but once was enough for me on this occasion.