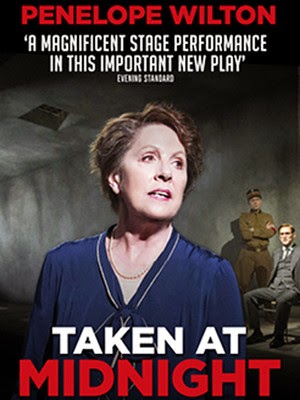 
It has been a little while since I saw this, the review is late because I saw a preview of the show and also because I was unwell the week after seeing it.

There is also another reason - the old adage if you can't say something nice,don't say anything at all rings horribly true with my feelings on the play.

We had good seats, the actors spoke well and the scenery and use of stage was good. The original story - that of lawyer Hans Litton -  is incredible.  This is a man who put Hitler on trial before he came to power and was then, inevitably, imprisoned once Hitler was legitimately elected to power.

So what went wrong?  For me there was just too much narration and not enough acting, I think in fact that the cast spent more time carrying props on and off the stage than they did interacting with them, or each other. There were two stand out performances that of John Light as Dr Konrad the SS Officer and Martin Hutson as Hans.  The role of Hans' mother, played by Penelope Wilton, should have been a tour de force but sadly was one note and flat throughout.

In the final two scenes I finally became emotionally involved, and the final scene before the interval was shocking but on the whole this made a great radio play but not very inspiring theatre.


I'm not one for panto as a rule but as ever will make an exception for anything that the Blakeney Players stage thanks to knowing at least one of the cast!

This year's offering started with an incredible rendition of Circle of Life from a well known cartoon and stage show, complete with presentation of the baby to the audience, and really didn't look back from there.

It was full of timely gags about buying local and eating well and in the best tradition of panto had the leading boy played by a girl and the comedy dame played by a boy - both of whom seemed to relish their roles.

There were puns galore and some great song and dance routines and the evil hench-women were fabulously evil* (and inspired by Edward Scissorhands). The costumes were great and the wigs an integral part of the plot but it was the special effects that stole the show - I don't think I've seen anything finer on the professional stage. And who knew you could do that with a string of sausages?!

To try and explain the plot would ruin the whole thing, it really is a case of 'you had to be there' but I really didn't know that there were that many lettuce based gags out there!

Hats off to the whole cast and crew - can't wait for the summer show! 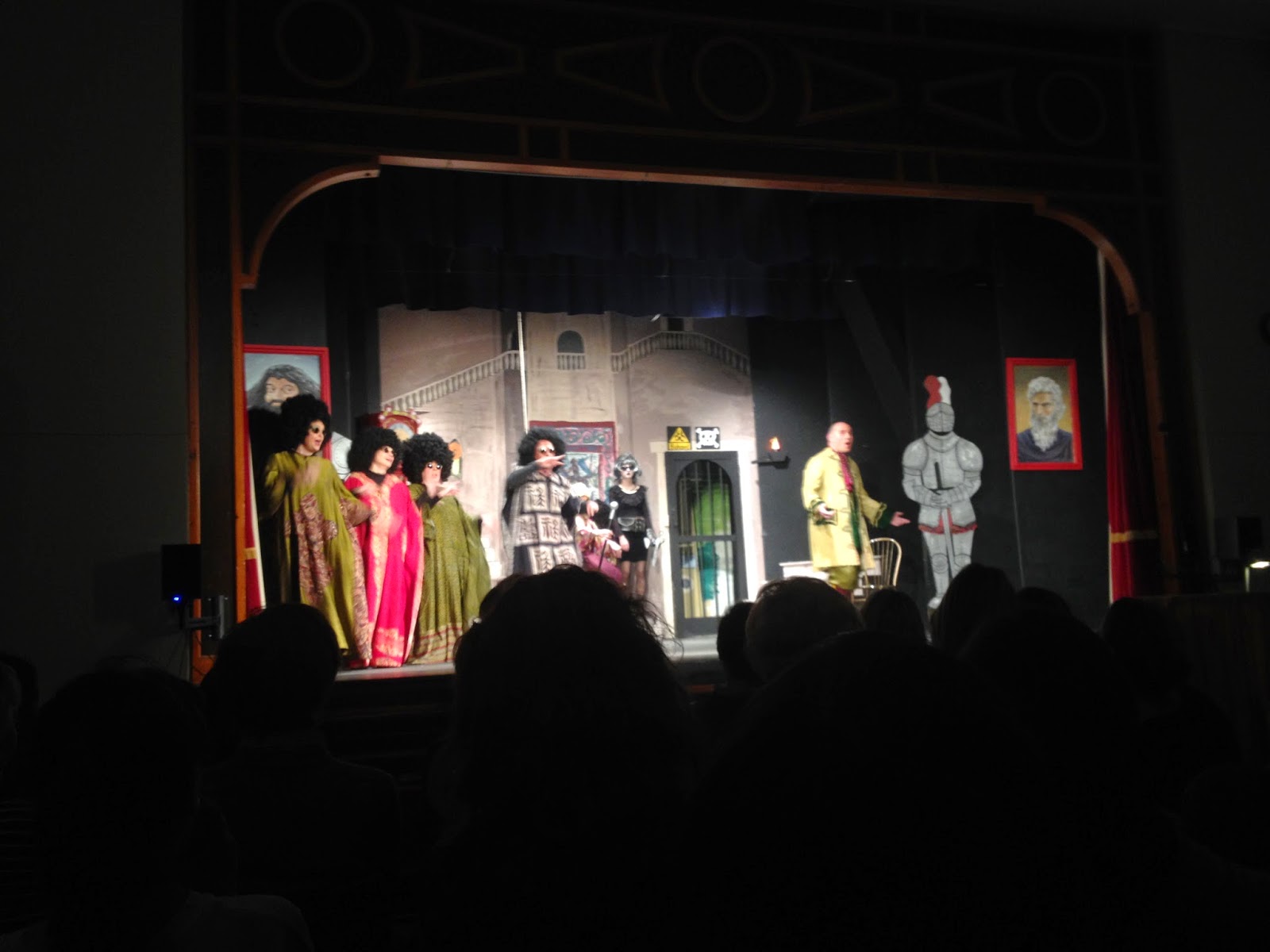 * full disclaimer - I've known one of the hench-women since she was two so may be (but really am not) biased in my review of this role, she's the one in black with the frightful wig in the photo above!
Posted by Sarah at 2:51 pm No comments:


Start as you mean to go on I say, and did as my first trip to the theatre in 2015 took place just three days in and involved my husband, mum and dad!

Our Christmas present to each other this past Christmas was tickets to see the revival of Miss Saigon, I'd seen it on tour a few years back. mum and dad had seen the original (with the original cast) and Mr Norfolkbookworm hadn't seen it but was convinced enough by the rest of us that he'd enjoy it.

The story is a reworking of the Puccini opera Madame Butterfly, set during and after the Vietnam War and is a full throttle musical spectacle from curtain up.  It is not for the faint hearted or prudish as some of each act is set in a brothel but it is breath taking and overwhelming in just the right way.

Thanks to my studies into the theatre there were very clever bits of staging and use of lighting that I noticed but that obviously worked as none of my family mentioned them for good or bad afterwards, but I do think that I have been conditioned a little by so many plays at the Globe.  This is a sad story and ends abruptly in someways and I did expect the cast to get up and either dance a jig or sing a final chorus which didn't happen!

A great way to start the New Year of theatre going off and I am pleased that we managed to get good, reasonable seats for this, Mr Norfolkbookworm and I won't be planning another trip to the show but we certainly did enjoy it and came out of the theatre with a real ear-worm which is just what you want from a piece of musical theatre! 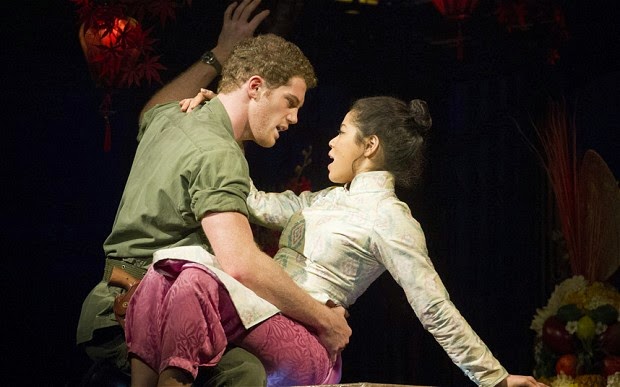 Picture of Kim and Chris taken from the Telegraph Review.

We were lucky that we'd decided to see this and not Les Miserables as our treat for on the day we saw the show there was a small fire at Les Mis and the performance was stopped after just 20 minutes! 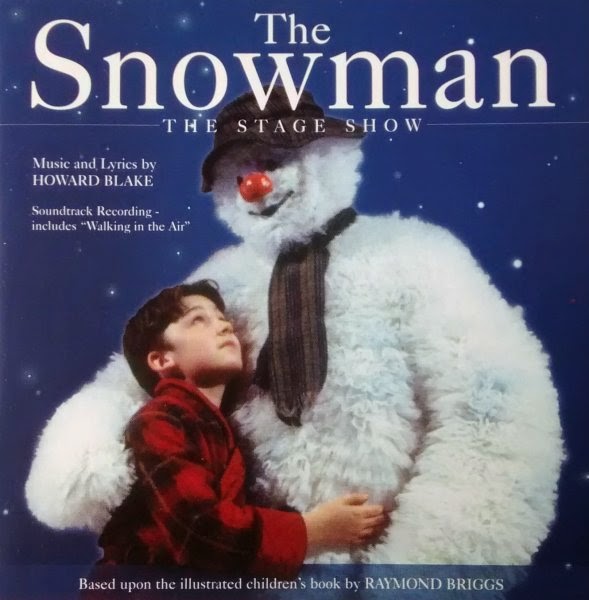 
Due to the pressures of Christmas, work and uni deadlines I didn't manage to get a review for this in before the end of the year, and indeed before I'd seen my first piece of theatre for 2015!

The magic of this show was so great in 2013 that my sister and I decided that a return was needed with my nephew and mum - who should have seen it the first time around but was too poorly.

We're pleased to say that the magic doesn't go away, every moment is just as good on a second viewing and as ever it was the response of both my mum and nephew that made it just that bit more special. It will take mum a long time to live down the audible sob that she gave as the Snowman and Boy first fly to the sounds of We're walking in the air.  What was also interesting was listening to my nephew talk about the show - last year he was a little bored/scared of the fighting scene between Jack Frost and the snowmen but this time it was his favourite bit.

Me? I loved it all and already can't decide if a viewing in December 2015 will spoil or increase the magic.
Posted by Sarah at 5:40 pm No comments: