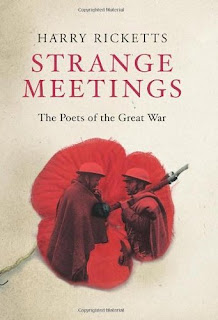 ... well this is a book review post to shock my dad (and many others that know me)

I think I've read a book that could be my book of the year, and it is about poetry and poets.

Now while I'm not a poetry fan normally I've always liked much of the poetry that came out of the First World War, for once studying a topic didn't put me off totally.

This book isn't about the poetry primarily but more about how the lives of the famous war poets were linked - either intimately, casually or via the six degrees of Kevin Bacon.

All of the characters came back to life on the page, they were neither demonised nor lionised and the excerpts of poetry complement the biographies perfectly.

I can honestly say that I almost missed my train stop on Saturday as I was reading this, it really was an undignified scramble to get off the train in time! I've been recommending the book left, right and centre since finishing it and that makes only the 3rd book this year that I can say that about.

It won't be to everyone's taste but I was blown away by the book.
Posted by Sarah at 9:00 am No comments:

Before our recent trip to the ancient Rome at the theatre Rebecca and I mixed our eras by finally getting to the Shakespeare exhibition at the British Museum.

We cut it a bit fine for this as the exhibition closes on November 25th and has been open since mid July.  It was worth the wait (and the very early start) as from the very start the exhibition was fascinating.

The exhibition is split into 9 areas that you wander through and is crammed full of artifacts, books, history and films of actors reading famous speeches.  The first bit, Shakespeare's London, was busy and a lot of the items on view were items I'd seen before but once through there I was spellbound.

I think that The Forest of Arden, The Medieval Past and The Classical World areas were my favourite parts, possibly because these areas reflected the plays I've seen or studied most recently. At present, and for many reasons, I feel that Henry V is my favourite play and there were lots of displays bringing this to life.

We spent well over an hour wandering around the exhibition and I certainly feel that I now understand the world of Shakespeare a lot better.

I think for me the best item was the very early theatre review - who knows perhaps in 400 years some of my theatre reviews will be used in an exhibition like this one... 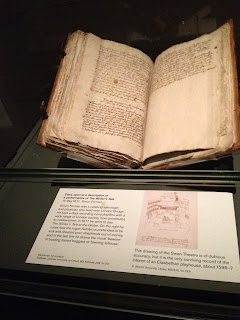 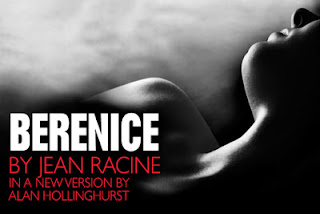 
Now the nights are longer and the days colder the early starts and late finishes that a day in London necessitates are becoming less appealing but I know that once I get over that the trips are going to be fun.

I have in fact made four trips to London in just 10 days. Once to see a comedy tryout, once to go to the London Aquarium with my sister and nephew, once for a Sherlock themed fund raiser and then lastly to go to the Donmar Warehouse with my usual theatre going partner in crime.*

Not knowing anything in particular about the story we chose this play solely because this adaptation has been written by Alan Hollinghurst who is one of our favourite authors.

The Donmar Warehouse is fast becoming one of may favourite venues in London. I can't say I'd necessarily like to see a very long play there as the seats are padded benches but the space is so intimate and cosy that I feel at home as soon as I enter the auditorium.

Berenice is set in Rome just after the death of the Emperor Vespasian. His successor Titus is in love with Queen Berenice, a non Roman.  Vespasian disapproved of the match but now that Titus is in charge Berenice is just waiting for his proposal. Life is never that simple and when another suitor appears and all of Rome disapproves of the match then you know things aren't going to go well...

The play is formed of long speeches rather than snappy dialogue and has a very sparse set - the only props are two chairs, a staircase and a dagger. None of this matters, the actors make it a very intense and captivating play, odd in the extreme but compelling. The ending is also a surprise in many ways and that was really pleasing to me.

I still am unsure why a play set in the Golden Palace, in the heart of Rome, was full of sand, even falling from the roof of the theatre but I loved it and I am now going to have to search out a fuller (translated) version of Racine's original play. 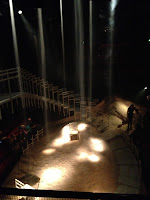 The Berenice set from our seats in the circle, sand and all!

*My theatre-going-partner-in-crime is now fine with me revealing her identity (as she told me in no uncertain terms on Saturday) and so to find out more about my talented friend Rebecca please do check out her website!

A long time ago

Retellings of Greek and Roman myths and legends are books that I am always drawn to. Just this year it became clear that I wasn't the only one as Madeline Miller won the Orange Prize for Fiction with her retelling of the story of Achilles, Patroculus and the Iliad. I've blogged before about my love of the Roman Mysteries by Caroline Lawrence too.

It isn't just the stories that I like, the histories and architecture also captivate.  Seeing that there was going to be a dedicated to the classics nearby I booked tickets as soon as they were available.

The day was well organised and scheduled, with several sessions though out the day all featuring 3 or 4 speakers. Limiting the talks to 15-25 minutes was good in many ways - if the topic didn't appeal you knew it was only short, and also you got to hear loads of ideas. BUT every so often I really wanted to listen to all the ideas the speaker had!

What I liked most about the day (apart from the chance to chat to one of my favourite authors!) was that the talks were pitched perfectly - they were neither too simple and thus patronising nor were they so academic that I was lost at any point.

My book list has grown incredibly, and I now want to travel extensively through the Greek and Roman world. I don't think I'll try to learn Latin though!

Theatre at the Pictures 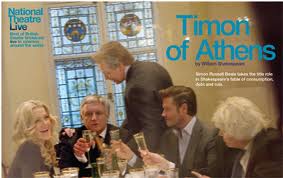 Thank heavens for whoever had the wonderful idea of broadcasting London productions into cinemas around the country (and indeed around the world).

This is the only play from season of National Theatre Live that I've seen at the cinema - one play I'd seen at the National and the other I missed due to having the lurgy.  I'm glad that I went out on a cold, wet Thursday night for this production, which was in fact was the very last performance of the play's run.

I've established over the last year that I prefer my Shakespeare performed as at the Globe so I was a little concerned about this version as it was totally up-to-date and had a definite setting of 2011/2012, however the draw for me was Simon Russell Beale. Everything I've seen him in has been great!

The play is all about money and how fickle people are - when Timon appears rich and lavishes gifts on his friends and entertains extravagantly everyone loves him, as soon as they realise he is bankrupt they all desert him.  The second half is all about Timon's life as a destitute person, and what I saw as his descent into controlled madness.

This is very much a play of two halves, and I preferred the first, but the acting was incredible and all credit to the National Theatre and the actors for making me see that Shakespeare can work in an updated form in a traditional theatre.

This is one of the plays that Shakespeare wrote with another author and Nicholas Hytner, the director, did say in the interval film that they had to alter/add to some scenes just t make the play make sense. Not having read the original I think that they did a good job, from start to finish I could follow the story and no lines stood out as being 'modern' despite the updating. Several people in the audience were unsure of making some roles female (the steward for example) but for me that was the only way that the play could have stayed realistic with the modern setting.

Seeing this at the cinema was ideal, the expense of a trip to London for this would have been okay but the convenience of trying something I was unsure of close to home was just right.