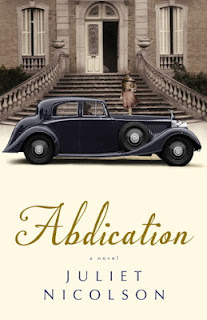 I think that it is clear from the (rare!) book reviews I write that I like historical fiction, and especially those set in the first half of the twentieth century.

I was very much looking forward to reading this one as it ticked all of my boxes - family saga, intense historical setting and written by an expert.

In the main I wasn't disappointed, the story-lines of the fictional characters wove pretty seamlessly with the 'real' characters and the descriptions of people and places made the book really live in my imagination.

Whilst the book is called Abdication in many ways that is a minor, and almost dull, strand in the narrative. The portrayal of David and Wallis was verging on the unsympathetic a lot of the time and Nicolson makes it very clear that had he become King history would have taken a very different line.

The strand of the story that I liked the most was the portrayal of the Jewish East End, Mosley and the Black Shirts are often glossed over in fiction (and history) books but here the fear and contempt comes shining through, as well as the reminder that ordinary people did support the British Union of Fascists.

I had worked out that there was a twist to May's own story but cleverly Nicolson still managed to surprise me with the full story.

My only vague criticism with the book is that it felt almost too visual at times it felt like a screen play complete with stage directions.  It would make a great television but for me it felt a little too written with that in mind.  This is a very minor complaint however and this is a book I can whole heartedly recommend.

The copy I read was an advance reading copy thanks to Net Galley.
Posted by Sarah at 1:00 pm No comments: 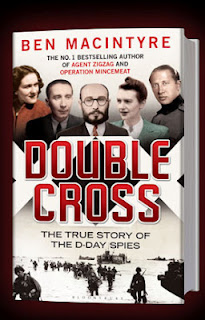 
This was one of the books I'd been saving up for my holiday. I've been a fan of Ben MacIntyre's books ever since I read Operation Mincemeat a few years ago. Agent Zigzag was a real treat last year on the World Book Night 2011 list and I was really looking forward to this one.

I didn't get to read it as quickly as I'd have liked as Mr Norfolkbookworm wanted to read it first and he is not the fastest of readers.

The wait was worth it, as ever the narrative was engaging and accessible. There is just the right amount of technical and historical detail to fully round out the story but this never swamps the human stories that are the key to the tale.

I have two criticisms of the book - one of my own and one from Mr Norfolkbookworm.

I found the constant use of cricketing terms really got on my nerves after a while. I can see why they are used - old boys' network, typically British etc. etc. but even though I am a cricketing fan they stuck out like a sore thumb to me as they were used so much. I do worry that if you aren't familiar with the terms then you might think this was another secret code being smuggled into a books about spies.

It was an anachronism that stuck out for Mr. N - one of the spies is given a transistor radio at one point. From the outset Mr. N said that this was too early for such a device and to prove this hunted out an Internet hotspot to look this up and according to Wikipedia he was right.  The version of the book I read was a proof thanks to the Netgalley website so this may have been corrected in the final draft but once I knew that there was an error like this in the book I was constantly wondering if there were many other errors in the book.

In general this was an excellent book, I found that the twists and turns of the double/triple/quadruple agents clear and exciting and while we do now know the outcome of WW2 at the time it was far more uncertain and this book really explores another side of the battles we fought.

It has been all a bit quiet here for the last few weeks as Mr Norfolkbookworm and I went away for 2 weeks in the sun.  After the weather here in the UK we were really looking forward to the break and we weren't disappointed  in the slightest.

We didn't see a cloud for two weeks and for most of the time the sea temperature was warmer than the actual temperature back home.  All in all it was a perfect break for doing lots of relaxing and lots of reading...which is what I did!

In the two weeks we were away I read 21 books and as ever they were from a broad sweep of genres.


There were some real surprises among these books - some I'd been saving for months and was disappointed by, some I didn't expect to enjoy but couldn't put down and others that I loathed but at the same time was compelled to finish...

The main thing that was different this year was that I didn't actually read a physical book in the time we were away - all 21were ebooks. In the past I've always read a mixture but this time I had a paperback in my back for those minutes on the plane where they don't let you read from a electronic device but as I had a window seat I found I was looking out of that rather than reading.

I have thoughts buzzing round my head about some of these books and will endeavour to share them soon but in the meantime one more photo to make you jealous! 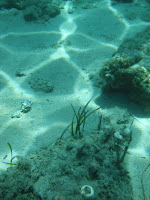