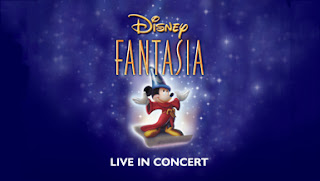 I think I am a bad influence on my family as this was an outing to the theatre with yet another member of the clan.

Joking aside I was very lucky to be invited on this trip and it was in fact my sister's birthday present from her husband.  Both of us have been Disney fans since we were little and I think that when Fantasia was released on video for the first time way back in the mists of time it was in fact the first pre-recorded film our parents gave us.

The luxury of the Royal Albert Hall was just what we needed on a damp, dreary October Sunday. We were sat up in the circle with a lovely clear view of the screen and the Royal Philharmonic and as soon as the lights dimmed and the music started we were swept away.

There were a lot of children, unsurprisingly, in the audience and one of the most magical things about the afternoon was their gasps of wonder/amusement as the film played. I'd forgotten some of the music/animation but what an experience for those lucky enough to be seeing bits of the films for the first time in such a setting.

My favourite scenes from Fantasia 2000 were both performed live - Gershwin's Raphsody in Blue and Elgar's Pomp and Circumstance (with Donald Duck) but sadly the Dance of the Hours performed by the hippos wasn't included.

The whole afternoon left me with a big smile on my face and I'm sure you can guess which films haven't been out of my DVD player since I got home...must put the Blu-Rays on my Christmas list! 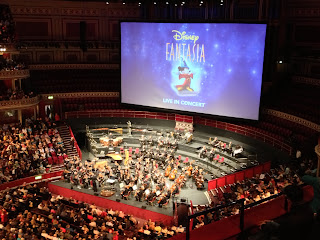 A huge thank you to my sister and brother-in-law for making this trip possible - the 6 hours on the train were totally worth it!
Posted by Sarah at 10:14 am 1 comment: 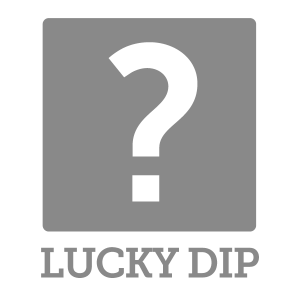 My reading is more eclectic than usual at present and I am loving the experience.

In addition to the challenges being presented by the two reading groups I belong to (International Fiction and Forgotten Gems) and my own choices of books for fun, I am also reading through an exceptionally long longlist of books that are being considered for inclusion in a promotion next spring and summer.

This list is so long and varied and contains so many books that I'd never (probably) have chosen for myself that I have asked other people to just hand me books to try.

So far I've read through 5 new books and all have certainly caught my attention in one way or another.  It is an odd feeling letting someone else choose what you read - not bad, just odd.  It isn't like studying or book group where you 'have' to read the book. It isn't like a recommendation from a friend. But it is like both of these things - with the advantage that if you don't like the book you can stop AND you can be honest and say you didn't like it with out fear of offending the person who gave it to you.

I'm liking the experience and I'm thinking that maybe when the final books are chosen I might ask random people to just hand me a book every so often.  My reading is generally very varied, but I do have a preferred type and preferred places I go to for recommendations so this randomness may expand my horizons in many new ways....
Posted by Sarah at 10:24 am No comments: 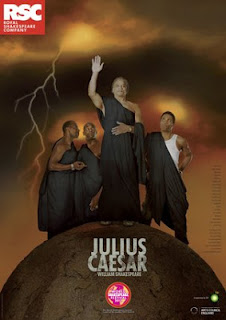 Trips to the theatre continue apace at present but for once this one didn't need a long trip to and from London.

Mr Norfolkbookworm and I had a night out in Norwich for this play, our first Shakespeare play from the RSC.

It was an innovative performance, rather than being in either Roman garb or Tudor/Stuart garb the play had been transported to vaguely contemporary Africa.  The language hadn't been updated at all but the dress and set could have been anywhere in Africa. Also in addition to tuning the ear to Shakespeare's language the audience had to also tune to an African-speaking-English accent too.

I enjoyed the play, but if I am honest nowhere near as much as I've enjoyed those I've seen at The Globe.  I have a feeling that I am a bit of a traditionalist with my Shakespeare and that for me seeing it performed in a setting and manner as it was written adds something to each play

The actors were very good and in a way the play did transfer very well to the new setting, I liked the way the musicians were integral to staging. The costumes were very effective in showing who was who and what side they were on - something that can become confusing in a political intrigue play. However at times I found myself almost giggling as the staging and music just kept making me remember the 1970s film version of Jesus Christ Superstar.

Another thing I learnt at this evening was that attending a serious and long play like this after a full and intense day at work was incredibly draining. Comedy and musicals are one thing but almost 3 hours of Shakespeare was a challenge.

I can't say that I won't seek out other RSC performances, but I know that for now my priority will be for those being staged at or by The Globe.
Posted by Sarah at 10:30 am No comments: 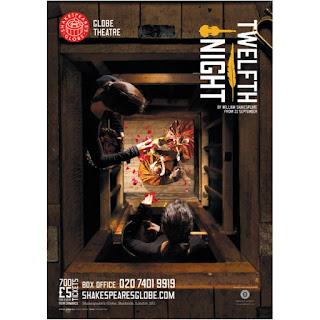 I'm a little behind (again) with reviews but this time I have two excuses - I came home from seeing this play and immediately developed nasty cold and then since feeling better Blogspot seems to have caught the same bug and hasn't really been playing ball as I've tried to post!

Twelfth Night was my fifth trip to The Globe this season and was the fourth and final 'new' play in the 2012 "The Play's the Thing' season. It was again an all male cast being led by Mark Rylance.

Like all of the plays I've seen at The Globe it was very,very good. The characters were brilliant and the whole piece worked well as an ensemble. I had been concerned that because Stephen Fry was in the cast that it would become a celebrity love fest for ten audience or that, because of his inexperience, the play would be dumbed down in some way.

I needn't have worried. Fry played up to the standard of the rest of the cast and like in all good plays I managed to forget who the actor was and just see the character. I'm not so sure that this was the case with all of the audience but I believed him as Malvolio.

This was another play that I was only vaguely aware of the story line in advance but this time I did find it harder to lose myself in the experience. This is no criticism of the actors/set/location just my personal reaction I feel - perhaps because of the germs that had yet to manifest themselves visibly?

As with Richard III this play is transferring to a traditional West End theatre in a few weeks and (perhaps) because of this the performance did seem more static than I'm used to at The Globe. This meant that due to the theatre shape and location it was hard to hear some of the lines when the actors weren't facing you, a problem that will be solved indoors with traditional seating.

I thought the confusion (as written by Shakespeare) of men playing women playing men was very well done (although some of the cast were more convincing that others!) as was the tender confusion of falling in love with what seem like the inappropriate choices. In these scenes this was by far the most romantic Shakespeare play I've seen.

This sounds like a negative review and my experience on the day was far from this, but I wasn't quite as buzzed leaving the 3hr+ play as I have been from the others this season. It was probably my least favourite Globe play this year but still in my top 10 of plays seen...and while I won't be rushing to see if I can get tickets for the West End transfer I wouldn't dismiss the idea of seeing it again. Who knows how much the cold I didn't know I had influenced my viewing! 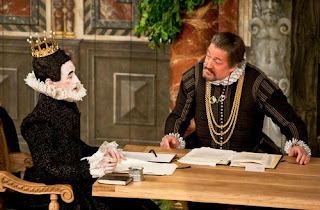 I'm currently dipping my toe back into the world of study with a distance learning course on theatre, it is interesting and one of the things recommended is to see a play by all of the playwrights on the syllabus - and if possible the actual play being looked at. Obviously the latter isn't easy but when the Royal Court announced they were premiering a new Caryl Churchill play I had to be pretty quick off the mark to make sure I got a ticket.

I'm not sure what I was expecting (I haven't got to the Churchill module yet!) but this really drew me out of my comfort zone.

I'd purposely not read reviews of the play but I had seen the star ratings go by and these covered a lot of numbers, but I knew that the Royal Court had a good reputation so I wasn't too worried. On the day I wasn't sure I wanted to go but that was more because of the glorious weather and spending what could well have been the last nice warm day of the year in a dark theatre just sounded daft.

I think I should have followed my gut instinct. This wasn't a play - it was 50+ scenes that weren't really related in any way, shape or form. It felt like a whole bunch of random sketches that were being tested to see which would work in a sit com or stand up comedy routine (in my opinion less than half of them).

There was no interval - and if there had been I'm not sure how many people wold have come back - it was just scene after scene in a blank white box with shockingly bright lights around it.

Some of the sketches were very funny, even when retold to family later, some were very moving and the actors without exception were very talented. For me though the simple lack of anything linking the scenes, or any knowledge of even why they were in the order they were, meant I couldn't relax into the afternoon at all. Perhaps I should have copied a lot of the audience and taken a large stiff drink into the auditorium with me!

It was an interesting afternoon in an interesting venue but for me the highlight was the couple sitting behind me arguing as they tried to remember which of them wanted to see the play "and for the love of God, why did they want to see this...thing!"
Posted by Sarah at 8:30 am No comments: