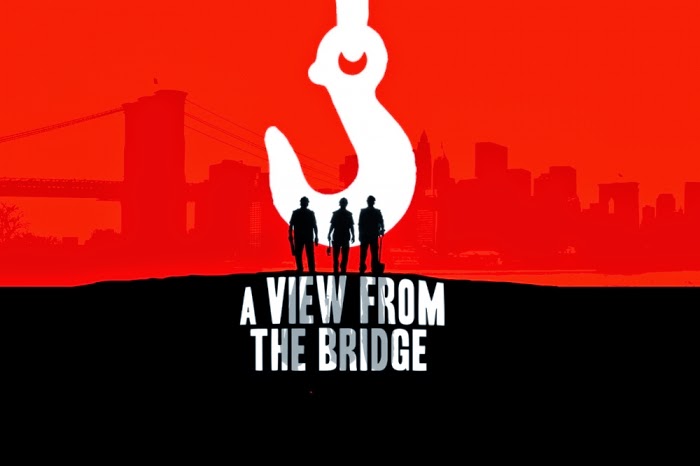 
This play has been received wall to wall rave reviews everywhere  - unusually the press and social media reviewers all agree.  We felt that we were very lucky to get tickets to this.

Well I supposed there always has to be a dissenting voice...

The play strips out any props or scenery and is played on a thrust stage which is a white box with a perspex rim.  The actors all talk in a Brooklyn accent and the setting is kept as Miller intended.

I'm not sure if it was because I didn't know the play in advance but I found this blank setting to alienate me from the words and I just couldn't connect with the plot at all.  This version also plays straight through with no interval and I found that, unlike most of the reviews, that this didn't allow the tension and tragedy to build for me and I just didn't care enough.

The actors were all very good and there wasn't a weak member on the stage but ultimately I just didn't care and when the ending came I didn't think that it was tragic at all.  Just a relief!

I've since read the script of the play and Miller is very, very descriptive in his writing and gives pages of stage direction - all of which was discarded here.  Perhaps this would have worked better for me if I'd seen a traditional staging first? 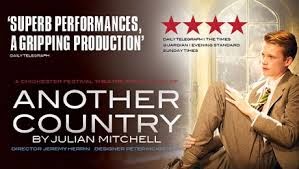 Another Country, The Trafalgar Studios, London. May 2014.


It has been an incredible little while for me in May and I've packed a lot into a few weeks. This means that some of the events that happened towards the start of the month are starting to be a little fuzzy around the edges when it comes to details. However as I blog for pleasure and to create a memory for me I'm not too worried about this.

Rebecca and I had another one of our mammoth London weekends recently, and although this time we packed in slightly less than usual due to a mini heatwave we still saw three plays.

The first was the sublime Another Country with a cast of young actors - many of them only just out of college.  You'd never have guessed this and it was a shame that the theatre was over half empty for the matinee, this worked in our favour though as we were upgraded from seats at the back of the auditorium to the third row!

The entire play takes place in a boarding school and has many themes, the main one being that the old boy network rules completely and that to be different in anyway works against you. The school has been rocked by a suicide and there is a lot of soul searching taking place as well as a lot of hypocrisy.  Another plot thread is that one of the character is Julian Mitchell's idea of the Cambridge Spy Guy Bennett and how his experiences at school led him along the path he took.

This last plot strand is often the one focused on most by critics but I feel that in this revival it is a smaller part - mainly because the scandal of the Cambridge Spies is now so far away that many of the younger audience may not have heard of it, and because unlike The History Boys there is no epilogue stating where the boys go after leaving school. The friendships and the hypocrisy are what I drew.

I loved the play, and while I will look out for the film version it is going to have to be amazing to be better than the play I saw.


After our recent trip to Sundance London we had another chance to see films as part of a festival at the homegrown Norwich Film Festival.  Once more we decided to focus on the Short Film programme and managed to get to three of the four evening events.

First up we saw the BAFTA shorts - all of the films nominated at the main film award earlier in the year.  This screening comprised of seven films shown in two hours and surprisingly was my least favourite event.

The films were all technically good (and I'm told that two even were played as part of the 2013 Norwich Film Festival) but with the exception of Island Queen  none of them particularly wowed me. I think that after the variety of Sundance these all seemed too professional and polished and often too long.  I can't quite explain it in a way but I just preferred the shorter, rougher films.

Luckily the other two screenings were more like this, and while (obviously) I didn't like all of the 27 films shown they were much more to my taste comprising a mix of 1 minute films, student projects, animations and some professional films.

My overall favourite films were all animations: The Gravedigger's Tale , Une Aventure d'Escargots and Angels and Ghosts but the A Day in the Life of a Bathroom Mirror  was very funny as was Liars and several others were very moving.

I'm not a huge fan of films generally but 'shorts' are really growing on me and I'm looking forward to next year's festival already.


This was always a play I was nervous about seeing - it was a set text in my first term and even reading it made me feel a bit queasy.  It is beyond violent.

This version of Titus Andronicus was first staged in 2006 and has the reputation for being the play that caused the most faints at The Globe, I'm not sure if it is urban legend or not but the figure of 40 is banded around an awful lot.

Having read the play I was at least aware when the really gory bits were going to happen, and thanks to the directing choices they were usually signposted clearly so I had plenty of time to shut my eyes (and cover my ears!) which helped.  I also liked the way that humour was added to the play with the choices of style given to Tamora and Aaron which again helped  to relieve the violence.

Having studied more about the theatre of Shakespeare's time I did wince a little at the extensive use made of the Groundling area by the actors, and I do think that the scaffolding cages were over-used - just a little too much of the action became invisible from the Upper Gallery, luckily for us this was mostly empty the day we visited so we were able to move around, stand and lean so as not to miss anything.

As for the fainting, well yes it is gory but I think that the smoke and incense that is constantly being wafted around the Groundling area, along with the cloth covers not letting it escape may have a lot more to do with this - luckily being so high up most of this had dispersed before it reached us, but I know the smell of that would have made me feel unwell, possibly quicker than the gore!

I'm really glad that I plucked up the courage to see the play, but I don't think it is one I will want to see again - or that I'll buy the DVD of it should it be released.  I'm just too squeamish.

And no - even after a week we haven't considered having pie for dinner! 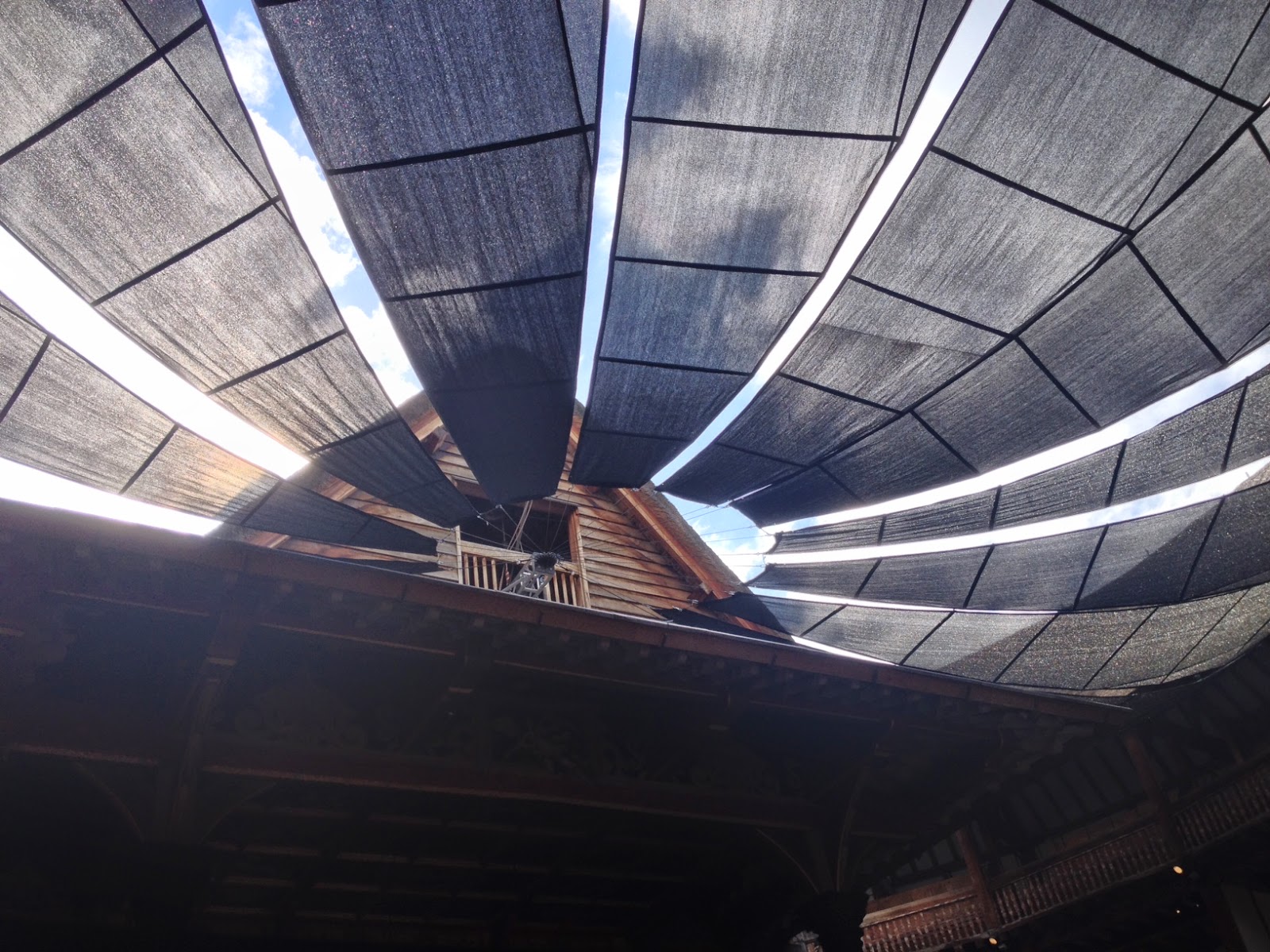 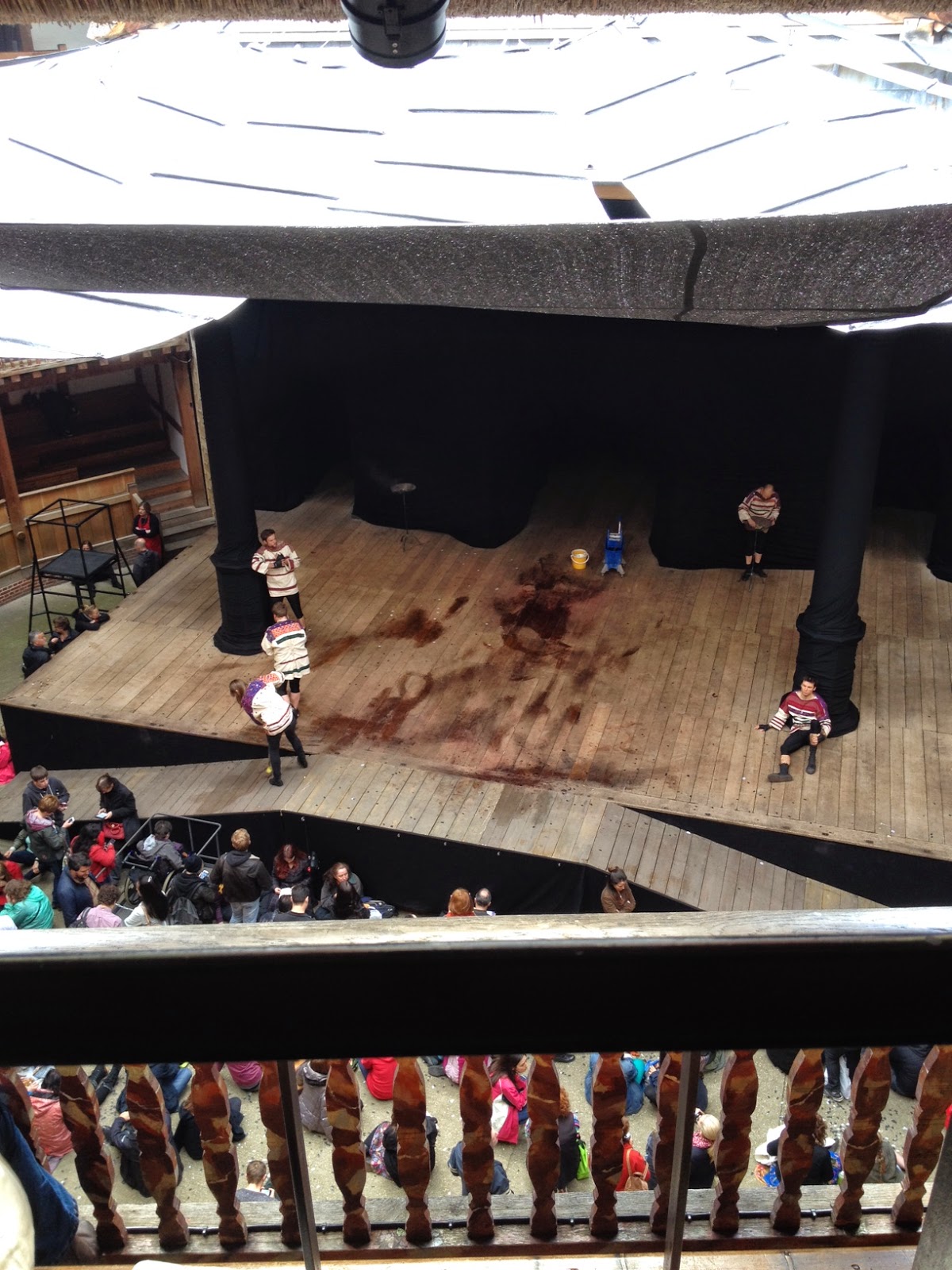 Mopping the blood from the stage in the interval

The Vikings at the British Museum, April 2014.


I'd like to think that we found this exhibition underwhelming because we were tired but after a night in a nice hotel, a lovely breakfast and then a gentle stroll to the museum mean that this wasn't the case.

I am not hugely knowledgeable about the Vikings but thanks to In Our Time and novels from Kevin Crossley Holland I do know a little about them and I hoped to learn more at this exhibition.

Sadly the set up of this exhibition left me feeling disappointed and trampled.  Once more the curse of the audio guide struck and as soon as you walked through the door there was a crowd - even with our early ticket of 10 am on a Sunday. In addition to that the cabinets were not numbered and so even when you got to the front deciphering the contents wasn't easy.

In the end we mostly skipped the first room and found that it did get a little better further through as there was more space and it was easier to reconcile the displays with the information but on the whole we found this an over priced and over rated exhibition, which is a real shame as we've loved the others we have seen at the venue.

If the exhibition was this busy first thing on a Sunday morning I dread to think how bad it is on a week day when the school parties are also in.

On the plus side getting to see the Lewis chessmen in cabinets that really let you look closely at them was great - plus no one else in the room seemed to want to see them!


Mr Norfolkbookworm is much more of a film and cinema person than I am but as he so kindly accompanies me to so much theatre I am making an effort with films this year and to start this off we both went to the O2 in Greenwich recently to attend events at the Sundance London film festival.

We had tickets to both of the Shorts programmes and over the space of about 3 hours (plus time for a lovely sushi lunch) we saw 18 short films, some of which were really not to my taste and others that I want to watch time and time again.

Screening 1 started at 11.30 so this meant an early start from Norwich to get there in time but it was worth it as the first film screened was actually the Short Film Competition winner and called Russian Roulette. Bizarrely this was all about an Internet dating site used like Russian Roulette and the girl makes contact with a lonely astronaut maintaining a space telescope - the film can be seen here.

Other favourites from the morning session were Marilyn Myller and Cruising Electric (1980) which sadly isn't available on line.

In the afternoon another 9 films were screened and this session included the other two films I liked the best - Metube: August Sings Carmen "Habanera" and the incredibly moving I think this is the closest to how the footage looked.

I really enjoyed the films but I'm not sure if it is because we were there in the day time and attending niche events but there didn't seem to be much of a festival atmosphere, in fact the "Festival Square" was all shut up when we arrived although by our late lunch there was live music as well as food/drink stalls to visit.

I still prefer theatre to film but I am now looking forward to the Norwich Film Festival in a few days - we have tickets to three short film events at that!

Please note that not all of the films I've linked to are 'worksafe' although none are probably higher than a '15' rating.
Posted by Sarah at 10:28 am No comments: