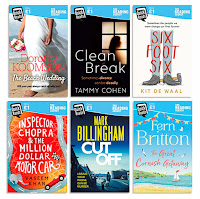 
Happily my reading stamina is still increasing following my recent illness (although it has slowed/gone a little backwards as I am tired out by a limited return to work) but while I was really struggling the kind people from ED Public Relations (@ed.pr on twitter) sent me a surprise parcel comprising three of the 2018 Quick Reads titles.


"was founded by Baroness Gail Rebuck DBE in 2006 to provide shorter, easier to read, accessible fiction for less confident adult readers. Now in its 12th year, the programme has distributed over 4.8 million books since it was launched and introduced hundreds of thousands of new readers each year to the joys and benefits of reading."

It took me a while to read them but I did enjoy them greatly but the biggest discovery for me was the Inspector Chopra book.  This is a mystery set in the back streets of Mumbai and featured a private detective and his pet baby elephant solving a the mystery of a missing car.

On many levels this book wasn't an instant fit: how was I going to follow the plot of a crime/mystery novel at a time when I had real concentration and memory problems? Also how was I going to be able to break an already short book up into chunks that I could physically manage to read? Oh, and the biggie, as a rule the crime genre really isn't my cup of tea!

The wise people from @edpr obviously knew what they were doing for the format of the book was just right, the chapters were complete vignettes and easy to start and stop. The mystery was just complicated enough so that I didn't guess 'whodunnit' but not so complicated I couldn't follow the reasoning. The addition of a baby elephant sidekick is a genius idea. The book may also be considered easier to read but for me it perfectly conjured Mumbai and I felt like I was watching a movie as I was reading, fewer words creating a full picture regardless.

Now I am more recovered I will look out for the full length novels by Vaseem Kahn but I am a little nervous that they won't be as good as this short book. I know that the short story format is considered both hard to write and hard to sell but it worked splendidly here and I'd love to read more short stories in this world.

Again many thanks to those at ED Public Relations who sent the books to me as a gift and with no expectations that I'd review them.
Posted by Sarah at 9:30 am No comments: 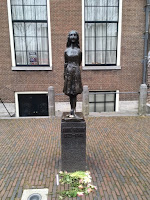 
The Diary of Anne Frank has long been an important book to me, I first read it as a young teenager, then went on to read it in German for that A Level and finally studied it in some depth during my MA in Children's Literature. The last time we visited Amsterdam we didn't realise how far in advance you had to book tickets to tour the Secret Annexe and so it was top of my wish list on a recent visit to the city.

I don't know what I was expecting but it certainly wasn't entirely what we got.  I've seen the touring Anne Frank exhibition in a couple of forms and always been impressed at the balance this presents. While Anne's diary and story are special the exhibition always managed to put her life into a greater historical context.

I found this to be missing in the tour of the Prinsengracht building. The whole thing felt a little like a shrine to Anne, there was so little information about her immediate family - let alone the other four people who shared the annexe with the Franks. I have studied the Holocaust/Shoah and so have a greater understanding of this part of twentieth century history, but if I was coming to the Anne Frank House with little or no context I would have come away feeling that it was sad Anne (and most of her family) died but with no idea of the scale of the Holocaust, that Anne was one of millions from across Europe...

It wasn't all bad however. The audio tour was brilliant. It was clear and easy to use and if you missed something then it was easy to re-listen and not be forced on a route march through the building. You also got a real feel for how small and dark the hiding place was - I really did imagine it being both bigger and lighter. The fear of discovery thanks to noise was also clear to see as the wooden floors in Dutch building are not built for quietness.  It was also nice to see some of the photos that Anne stuck to the walls and also excerpt from the original diary.

I may be being unfair on the museum as it is currently undergoing some renovations but the final straw for me was that the tour ended in a cafe/restaurant, not even the ubiquitous gift shop! When I did look in the museum shop however that was also a disappointment for again it only contained copies of the Diary (admittedly in dozens of languages) and gifts relating to Anne and the building - there were still no items putting Anne's story into context.

I'm pleased to have finally seen the Secret Annexe so on my next reread of the Diary I will be able to visualise the location more but right now I am not at all impressed with the museum's interpretation of the two plus years the family spent in hiding.
Posted by Sarah at 4:30 pm No comments:

At last a book review! 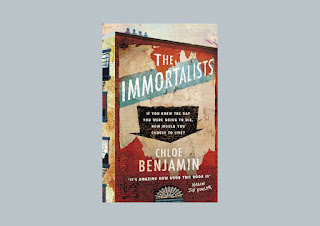 The Immortalists by Chloe Benjamin.


This is actually the second new work of fiction I've managed to finish so far this year (I will talk about the 1st closer to when it is published in late spring) and I really liked the book a lot. Here's the blurb from NetGalley that 'sold' the book to me:

It's 1969, and holed up in a grimy tenement building in New York's Lower East Side is a travelling psychic who claims to be able to tell anyone the date they will die. The four Gold children, too young for what they're about to hear, sneak out to learn their fortunes.
Such prophecies could be dismissed as trickery and nonsense, yet the Golds bury theirs deep. Over the years that follow they attempt to ignore, embrace, cheat and defy the 'knowledge' given to them that day - but it will shape the course of their lives forever.

I think that what helped me finish this book over others was the format of the book. Although the siblings' lives do intertwine each of the four has a definite section and so it was like reading four novellas rather than one long novel.

I found this book to be very clever - it covered vasts sweeps of American history and also remained very intimate.  All of the responses given by the siblings to being given a death date seemed very real and how this knowledge affected their behaviour seemed totally plausible - do you burn brightly for a short time or do you do everything you can to live a long life? Does the knowledge overwhelm you?

I've read books before where protagonists have known their death dates but these have tended to be either dystopian fiction or pure sci-fi/fantasy and I've often found them a bit far fetched. This more literary, family focused novel was just a great read and the style just perfect for me right now.

Thanks to Net Galley for providing the eProof.