I love reading books that are set in locations that I've never visited (and probably will never visit) whether the books are fiction or non fiction and regardless as to if they are in translation or not. Just lately two books have really challenged what I thought I knew about two countries.


The first was a non fiction book, called Two Trees Make a Forest.

This is a book that ticked many of my personal interests: travel, nature writing and family history. It was also about Taiwan, a country that I had always thought was a relatively liberal place and a definite alternative to China. I was very surprised to discover that it was subject to martial law for so long, and as repressive as mainland China in its way, just not a communist country.

I think that some of my preconceptions come about because in the time that I've been news/politically aware it has moved away from a one party, repressive system and become more liberal  - unconsciously I had thought that this was always the case.  Always good to learn more and this was a fascinating book about reconnecting with your roots.

The second book that really opened my eyes recently also comes from the far east, as it is set in South Korea, Kim Jeyung, Born 1982 (by Chi Nam-Joo, trans. Jamie Chang)

This is a book that is all about the pressures that South Koreans around my age/my sister's age face in society today, and especially how women are treated. It was truly horrifying and eye-opening, despite nothing truly horrific actually taking place.  The publisher blurb gives a hint of the subject matter:

This doesn't quite warn you just what a punch this book packs, especially at the end. Although fiction all of the statistical claims, figures and news stories are given footnotes that allow you to see that this is real and not exaggerated for a novel.

Again I had the idea that South Korea was a 'good guy' - that it was progressive and to be held up as a beacon for showing how a country can heal from a traumatic recent past.

A film has been made of the book, and it is a best seller in Korea. This translation will be published in February 2020 and I hope that it is as well received in English as it has been in Korean - it is an important read, and always good to remember that there is a lot of work to do world wide on equality.


With thanks to Norfolk Libraries & Net Galley for these two books.
Posted by Sarah at 3:15 pm No comments:

Travelogue or memoir? Or Both? 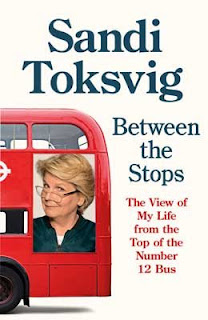 Between the Stops: The View of My Life from the Top of the Number 12 Bus by Sandi Toksvig


As a fan of both Toksvig's earlier books and her work on the TV I've been very excited about this book since I heard it was coming and my cup nearly ran over when I was granted an early review copy by Net Galley.

While Toksvig has had an interesting and varied life which would have made a straight autobiography an enjoyable read this book moved away from that and we follow Sandi as she takes the Number 12 bus from her home to the BBC building in central London.

Like the bus this lets the book unfold in a slower, more meandering way as Toksvig talks about her life and the sights she sees from the bus, intertwining these with thoughts on modern life and politics.

The talent in the book is to know how much information to give from each area and how to stop it becoming a travelogue or a 'show off' tome. Toksivg is clearly incredibly knowledgeable and curious (which is why she makes such a great host of QI) but she also knows how to stop the book becoming a book of facts with her use of comedy and self deprecation while she never apologises for her intelligence or her views.

There are a lot of celebrity biographies to read but this one is a cut above the rest, the personal is mixed so well with the rest that I really do feel that I got to sit next to Sandi on the bus and hear all about her life and the history of the areas we were passing.

I do also want to take the Number 12 bus now and see these sites for myself - I'm obviously a real sucker for books that are entertaining and can be used as a travel guide, after all my last review was for the same style of book!


(Reviews from Kentishbookboy will resume soon - he, Mr Norfolkbookworm and I are all enjoying Harry Potter although I'm not so sure his mum is!)
Posted by Sarah at 4:19 pm No comments: 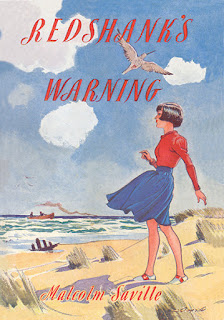 
I used to be an avid collector of children's books from the 1920s/30s/40s but in recent years this has changed from an indiscriminate 'try everything' hobby to my only collecting books by a specific few authors. The exception to this rule is books set in locations I am familiar with.

It was with great excitement this week that a new to me kidlit book was waiting on the doorstep when I got in from work. I knew the name Malcolm Saville but I'd not read anything by him however as Redshank's Warning has a Norfolk setting I just knew I had to give it a go.

Not only is the book a Norfolk story, it is also set in Blakeney up on the North Norfolk Coast - an area I know pretty well. As it would seem the author did, for unlike so many books that have a Norfolk setting Saville barely plays around with geography and you could still walk around the village using the novel as a travel guide.

The sea has changed a little of the geography when the protagonists leave the village and go out to the Point and the marshes but it is still all incredibly recognisable - and the main hotel talked about is still reasonably posh even 70 years on! Knowing two people who work in the modern day Post Office added another (unintentional) layer of amusement for me as I read the parts of the book set there. I also now want to explore the church more, taking care not to get locked into the tower!

To be honest the thriller-esque plot left me a little cold but I really wasn't reading the book for this at all, just the wonderful descriptions of Blakeney, the marshes and the wildlife.
I'm not sure I'll seek out the following books in this series (unless they too have a Norfolk setting) but this has joined two of my other favourite Norfolk-set kidlit books -When Marnie Was There and The Great Gale. 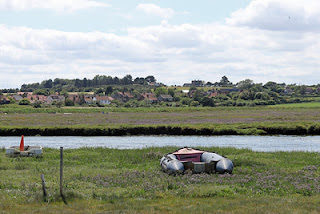 Blakeney village from the marsh 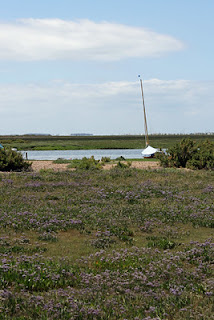 looking towards the point from near the Quay