Warning this blog post may contain spoilers - but as these are plot points from books published over 100 years ago I don't mind!

I don't have a great track record reading the modern sequels to books I adored as a child. The Return to Hundred Acre Wood is a book that I can't get out of my mind and I really didn't like another sequel to a Frances Hodgson Burnett book either.

Thus it was with trepidation I reserved Return to the Secret Garden from the library.  I'm so pleased that I did.  Webb has not continued the book from the immediate end but has moved the story on to a WW2 setting. Orphans housed at London orphanage are evacuated to Misstlethwaite Manor in September 1939 and have to learn to adapt to their new life.

At first I was worried that the book was just going to be a slightly modernised retelling of the original: a sad, lonely, and bad tempered orphan arrives in the new place and immediately finds a robin who leads her around the garden to a more secret place and she also hears crying in the night... So far so derivative.

Webb however is skilled enough to use these elements that are familiar from the original to weave a new tale but that lovingly references all of the original plot elements and characters. I was very happy to be surprised by the book, and I am not ashamed to say that it did bring a huge lump to my throat in more than one place.

Like so many of the modern adaptations it isn't as long or as complex as the original but as sequels go I loved it.

Which was a relief as earlier in the year I'd read Jacqueline Wilson's updated version of What Katy Did, called simply Katy.

In this, the first half really is a rewrite of the original just modernised and as someone very familiar with the original I was bored, it didn't work and I wondered why on earth anyone would read this and not the Coolidge one.

However after Katy's accident the book changed completely and I found it to be a convincing and realistic read of how this little girl would have reacted after a life changing accident.  Also an improvement on the original is the loss of the moralising, the idea of the saintly invalid and also the miraculous recovery!

This really was a book of two halves and I am glad I carried on to the end but for anyone familiar with the original I suggest skipping ahead to the middle, the start adds nothing.

So a mixed bag for sequels/rewrites of classic books this year. I am intrigued to read Kate Saunder's Five Children on the Western Front but this will be a different sort of read as I've never yet managed to finish the original!

The Gap of Time by Jeanette Winterson.


After my recent trip to see Shakespeare's The Winter's Tale and being a little disappointed (!) I wasn't sure that I really wanted to read a novel based on the play.

I'm glad that I didn't put it off however as this was very, very clever.  Unlike many books based on Shakespeare's plays this one actually follows the plot very closely and it works brilliantly.

The plot has been updated to modern times and has a slight dystopian feel to it. All of the plot points from the play are included and although the catalyst of Leonte's jealousy appears from nowhere and seems preposterous but it is cleverly worked with some extra back story to make it more understandable as the novel unravels.

The novel form also allows us to stay in touch with the two halves of the plot far better than the play did, which makes it seem a little more rounded. We also stay a little better in touch with all of the characters and so their personal story lines work and this helps the reveals at the end of the story to mirror the play but to also work in a modern day setting.

Knowing the play well meant that at first I was bemused by the opening scene and slight re-working of the plot time line but by the end it all came together and I was carried away with the story and not at all bothered by the 'pastoral' scenes when they appeared. I believed in all of the characters and even disliked the 'comic' ones less than those in the play!

My only criticism is that Jeanette Winterson couldn't resist putting herself into the plot, that self-reference really jumped out to me and I felt was unnecessary, surely the prestige of being chosen to write 'official' Shakespeare reworkings to commemorate the 400th anniversary of his death is enough, without having to immortalise yourself in the text too?

I think that this will work as a stand alone novel if you aren't familiar with The Winter's Tale but reading it as a companion to the play really worked for me. I can't wait to read the next volumes in this series.
Posted by Sarah at 4:24 pm No comments: 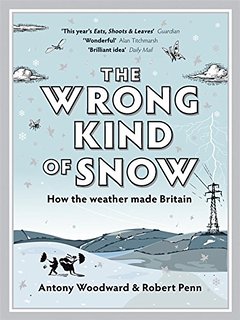 
All year Mr Norfolkbookworm and I have been dipping into the wonderful The Wrong Kind of Snow, which was a great find in the National Trust bookshop at Blickling Hall in January.

This has a entry for every day of the year with quirky weather facts, or happenings in history that occurred due the atmospheric conditions on that day.  There's been a lot of humour, lots of quotes from novels to add to the ever-growing pile of books and also a lot of discussion between the two of us. There have also been some eye-opening and sad entries.


However it is now nearly the end of the year and of the book and we're looking for something in the same vein for 2016.

We both read at very different speeds but we're both adventurous readers so something like this was ideal to share during the year.  We're not really looking for a straight diary like Pepys but wouldn't rule out diaries in general and we don't mind if it is science or arts based... over to you!
Posted by Sarah at 4:00 pm 4 comments: