Birth of the Space Age 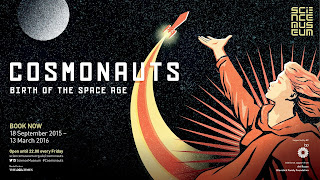 
Regular readers of this blog will know that I am pretty interested in the history of manned space flight and that I'll travel all over the place to see new things and meet new people.  Apart from the one trip last year to see Alexei Leonov I've not had the chance to see or learn much about the Russian Space Programme, mainly thanks to the secrecy surrounding it.

Mr Norfolkbookworm (and my dad) did make a trip to Russia a few years ago and got to see Star City as well as some other space sights and museums but the chance to see many items all curated together wasn't to be missed and so we found ourselves at the Science Museum shortly after the museum opened ready to explore this exhibition thoroughly.

I found it to be utterly fascinating, from the early ideas and drawings of those who had no idea of what space would be like (but who were unnervingly accurate with their predictions) right through to Soyuz capsule identical to the one that Tim Peake will return to earth in later this year the exhibition was well laid out and fascinating.

From trips to Florida I knew how primitive the early space program had been but this was a whole new level, the imperative to be first just caused so much innovation and bravery as well as luck...

Highlights for me included seeing the capsule that carried the first woman, Valentina Tereshkova, into space and also the proposed lunar lander.  Thanks to a very knowledgeable guide the utter bravery (or lunacy) of the proposed Soviet moon landing really came to life, and her advice to go into the main space gallery after the exhibition and to compare this lander with the American one was brilliant.

Seeing items that are familiar from watching more recent missions to MIR and ISS was also interesting and I particularly loved the dining table, complete with hot plate that was used on MIR.  I can't tell which space program had the better food however.

Coming out of the exhibition the last item on display was a mannequin that Soviets sent around the moon to see what the effects of space travel would have on the human body, it was life sized with areas for human tissue equivalents to be included which were then studied on return to Earth.  This mannequin was launched shortly after the death of Gagarin and in tribute to him the face was a detailed model of his own. This gave the 'phantom mannequin' a really spooky presence and really reminded me of the body casts from Pompeii.

We spent a long time in the exhibition reading and studying everything closely and at no point felt like we were being encouraged to move on.  After meeting Leonov it was really nice to see his own art work especially the image of sunrise in space that he drew while on orbit but the thing that stays with me the most is that if perhaps the two space programs had been more open then some of the disasters and deaths that have occurred really could have been avoided.

After leaving the exhibition - via the gift shop naturally - we went into the main part of the museum to see the model of the US lunar lander and also the Apollo 10 capsule.  This was doubly poignant as in April we will be (all being well) meeting Gene Cernan who flew to the moon in "Charlie Brown" and also because a couple of days before our visit Edgar Mitchell, the sixth man to walk on the moon, sadly died - 45 years minus one day since he landed on the moon. 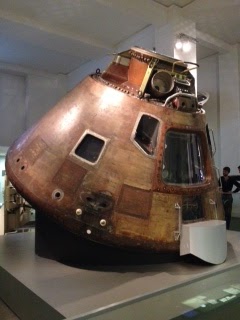 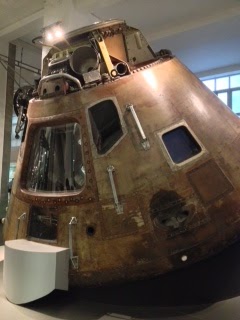 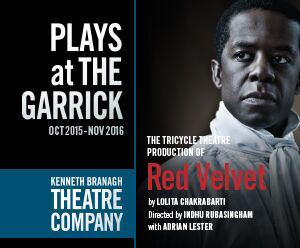 
After the disastrous visit to the Garrick to see The Winter's Tale last November I was feeling rather anxious about having booked Mr Norfolkbookworm and I seats to see Red Velvet in the same venue.  I'd picked different seats and held by breath that it would all be okay on the night - luckily it was and we got to see a wonderful play.

I saw this for the first time just under two years ago with Rebecca and raved about it then, it was in fact my second best play of 2014, and I was so enthusiastic about it that as soon as a West End rerun was announced Mr Norfolkbookworm instantly agreed to go and see what was so special about this play when I suggested it.

I was a little nervous, could such a powerful play have the same impact on second viewing? Was it really that goo? Would himself enjoy it as much as I'd intimated? Again the answer to all of these questions really was yes.

A little of the intimacy of the smaller venue is lost but the piece itself is just as powerful and again has as much to say to the audience of 2016 as it had in the 1800s.  All of the performances were spot on and the final scene is still a devastating reminder of the racism that still pervades our society.  The audience in our performance were particularly engaged with the play for at some of the most outrageous racist lines there were audible hisses throughout the theatre and no inappropriate laughter.

I did find the actor playing Charles Kean to be less terrifying this time around (I'm sorry I don't have his name to hand, £5 for a programme was a step too far for a re-watch), he certainly seemed to be playing up the comic aspect of his character but his casual, throwaway lines and disguised racism was still present.

I'm really happy we got to see this and if anyone reading this can grab a seat before it closed I recommend doing so - Row O had excellent sightlines!
Posted by Sarah at 4:40 pm No comments: 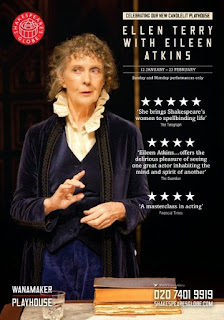 
In the first year of my MA one module I studied was all about the history of Shakespeare in performance and for my final essay I chose to write about Ellen Terry.  She was the one of the leading Shakespearean actresses of the late nineteenth century and into the twentieth and very influential both through her family and also her own talent. In addition to acting she also wrote essays about Shakespeare's women and really brought them to life, she was an early supporter of the woman's suffrage movement too and made public appearances to raise money for the cause.

In her own life time she performed these essays to audiences and after her death they were collected together and published. It is these essays that are brought back to life by Atkins in this 70 minute monologue and it is hard to believe that they are 100 years old for they sound as fresh and worthy of study now as they were then.

Atkins is playing Terry from the moment she walks on stage and the lectures are given so naturally and conversationally that I was held spellbound from the first word. The small biographical details that are also woven in to the lectures were a delight, as I'd studied Terry in some depth there were no new anecdotes but hearing 'her' give them was a delight and hearing the audience response to them was also a joy.

Atkins managed a virtuoso performance switching from Terry to numerous Shakespearean roles with just a twitch of the shoulders or a facial expression and some of here scenes were easier to follow than actual performances.

I'm so glad that this was revived in this Winter season at the Globe as I was very sorry to have missed it last time round, I do think that it is quite specialised - you do have to know the plays quite well to follow some of the trains of thought but Atkins has such a splendid voice that just sitting and listening to the words would also be a treat.

Having seen Simon Callow's one man Shakespeare a few years ago and thoroughly enjoying that I have to say that I think this was better. I'm not sure if it was because the subject, Shakespeare's women, chimed more with me or if it is because I now know the plays so much better but the scant 70 minutes left me wanting more and I hope that in this special anniversary year that this show has been recorded and that it will be broadcast so that many more people can see a wonderful performance. 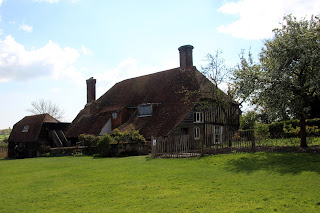 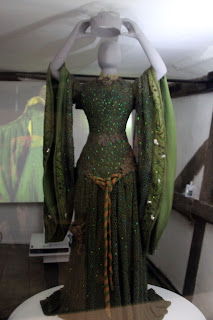 Ellen Terry's costume for Lady Macbeth - it is made from beetle wings to get the iridescent shine
Posted by Sarah at 4:23 pm No comments: