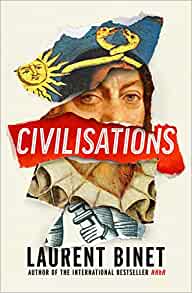 I have to thank the radio 4 programme Start the Week for bumping this book to the top of my reading pile, rather than letting is languish on my list marked 'potentially sounds interesting' for years.

This book has been called 'counter-factual' but that sounds a little press speak to me - I prefer to call it a 'what if' alternative history novel:

c.1000AD: Erik the Red's daughter heads south from Greenland1492: Columbus does not discover America1531: the Incas invade EuropeFreydis is the leader of a band of Viking warriors who get as far as Panama. Nobody knows what became of them...Five hundred years later, Christopher Columbus is sailing for the Americas, dreaming of gold and conquest. Even when captured by Incas, his faith in his superiority and his mission is unshaken.Thirty years after that, Atahualpa, the last Inca emperor, arrives in Europe. What does he find? The Spanish Inquisition, the Reformation, capitalism, the miracle of the printing press, endless warmongering between the ruling monarchies, and constant threat from the Turks.But most of all, downtrodden populations ready for revolution. Fortunately, he has a recent guidebook to acquiring power - Machiavelli's The Prince. It turns out he is very good at it. So, the stage is set for a Europe ruled by Incas and, when the Aztecs arrive on the scene, for a great war that will change history forever.

I loved this book from page one, each section takes the story further through history and is written in a style that mimics actual works from the actual historical period, thus the section set around 1000 is written like the Norse/Icelandic sagas and so on.

The book was a delight as history gets rewritten by the victors and when we meet famous people. like Erasmus, it feels natural and organic, not the author showing off what he knows. I am also sure that either Binet (or translator Taylor) are Monty Python fans....

I loved this book, despite it showing up just how insular my knowledge of history, and I wish I'd listened to Mr Norfolkbookworm and other friends earlier and read Binet before now.