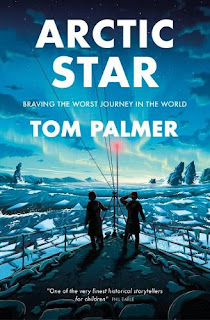 It doesn't seem that long since I was raving about Tom Palmer's last book, but I was late to the party on that one.

His new book Arctic Star has been on my radar for a lot longer and I've had copies on order for quite some time as when Palmer has been talking about it  I knew I would have deep connection with the tale.

Palmer has taken the less well known Arctic Convoys as his starting point for this novel and we follow 3 childhood friends as they join the navy and get assigned to these terrifying naval duties within the Arctic Circle.

From page one I felt cold, scared and seasick as we experienced the war from the boys' perspective. A very slight break in the tension occurs when the boys get a few hours shore leave in Russia but we're back at sea very soon.

After taking part in one convoy there is a longer shore leave for the characters and then they are redeployed back to the Arctic, this time serving on HMS Belfast.

This is where my personal connection to the story really starts as my paternal grandfather served on HMS Belfast. He had joined the navy at very much the same age and time as the boys in Palmer's story and through his naval records we've found that he served on 3 Atlantic convoys whilst on board HMS Striker.

Although these Atlantic Convoys weren't in the same league as the Arctic ones Grandad's did take place during the winter of 1943/44 and so thanks to Arctic Star I can now imagine his time on board more clearly.

Grandad join HMS Belfast in the summer of 1945 and was sailing to the Far East theatre of war when peace with Japan was announced. He was then part of the mission to repatriate POWs from the camps in the Far East, he remained with HMS Belfast in China until February 1946, when he was released to the Naval reserve. He was recalled to the Navy in 1950 (not long after my dad was born) and served on HMS Ceylon during the Korean war. In a big coincidence HMS Ceylon was released from duty in this area by HMS Belfast in 1951.

Palmer's book really brought life on a WW2 ship to life for me. I have visited HMS Belfast, and the guide on duty that day was able to take me to the area where Grandad (and Palmer's characters) would have spent their off duty time but it was the life breathed into this area by Arctic Star that really made the ship come to life for me.

I've been very careful to not talk too much about the plot of the book - if you don't know much about the Arctic Convoys then this book is a great introduction to the campaign whether you're a young reader or an adult. If you do know something about the convoys then this book brings them to vivid life and adds a whole new experience to your knowledge. I really recommend seeking it out if you can, and taking the time to visit HMS Belfast in London when it is possible again.

I don't think that I can review this book any less emotionally, for me it tells a story that is too often forgotten in a respectful and engaging way, and yes - it did give me more than one lump in my throat as I was reading it. 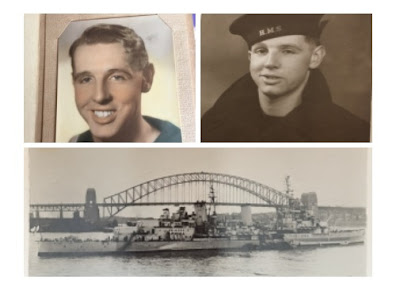 Able Seaman (Henry) Roy Skinner during WW2 with HMS Belfast in Sydney, 1945
As an aside Grandad was a terrible tease and as a small child I knew he'd been in the navy but my grasp of history was pretty weak so I completely believed him when he said he'd been Nelson's Cabin Boy. I did get my own back later on when I bought him a ship's biscuit from the gift shop near HMS Victory and encouraged him to eat it! From reading Arctic Star I am now wondering if he was always a joker or if his wartime service caused it to develop!