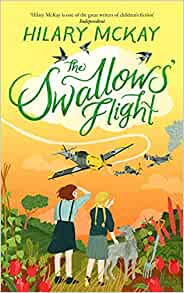 Back in 2018, when my reading stamina was at its lowest, Hilary McKay's The Skylarks' War held me captivated and was one of the first books that I managed to read from cover to cover in a weekend. It was a wonderful book and one that my mum and sister have also gone on to enjoy.

Skylarks' was a book about the lead up to the first world war and just after, whereas Swallows' is a story about the 1930s and world war two. The novel is a sequel to Skylarks' but moves on a generation and this time one narrative strand  follows two German boys and we see the increasing grip of fascism on their lives.

As with the first book I quickly lost myself in this one and found it as engrossing as any sweeping adult book set in the same time period. There are a few coincidences that as an adult I saw coming but with fiction this good I don't mind. I really hope that this becomes a classic text for schools, it is a book that deserves the same reverence given to Carrie's War and Goodnight Mr Tom (and I love that book) and it is definitely deserves to be on any curriculum/reading list far more than the implausible (and borderline offensive) The Boy in the Striped Pyjamas.